The government in Damascus and the Syrian Army are the solution of the problem,

the armed gangs of mercenaries–terrorists armed and financed by the U.S.A. and allies are the real problem,

a problem that the U.S. and allies created and now they do not want to resolve,

but take advantage and ride on it for their geopolitical interests,

regardless of the damages, destructions, pains, bereavements, horrors, that their criminal policy of destabilization and global war creates to the nations and people, both those who are the direct target, and those that belong to the countries of U.S. and allies  themselves. 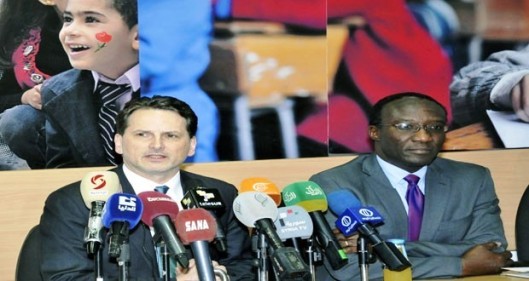 Damascus ~ Commissioner-General of The United Nations Relief and Works Agency for Palestine Refugees (UNRWA) Pierre Krähenbühl affirmed that the aim of his visit to Damascus and holding dialogue with the Syrian government is to find ways to improve and continue aid offered by the organization to the civilians in Yarmouk camp.

“With the help of the Syrian government, we offered aid to 500 persons who left the camp and went to Yalda town,” Krähenbühl said at a press conference.

He added the continued suffering of the civilians in the camp is linked to the presence of the armed groups in it, yet, we searched for a side which has an influence on these groups to assume responsibility towards this issue and protect the civilians.

“UNRWA cooperates and coordinates with the Syrian government to find a place where civilians have the ability to get the aid,” the UNRWA official said.

Nearly 2000 persons left Yarmouk camp during the latest days with the help of the army, fleeing crimes of ISISI and Jabhat al-Nusra terrorist organizations.