Is the military of the United States training Mujahadeen (Free Syrian Army, Al-Farouk, Al-Farouq, ISIS or whatever name or brigade these groups who secretly fight together), militia while training Saudi Royal Forces or “Saudi Land Forces” under “Operation Freedom Forces” or “Ironhawk Three?”

Or are they training Mujahadeen along side the Saudi Land Forces?

Is the Royal Saudi Land Force actually another name for these militias to legitimize these operations?

Click any image to enlarge it for a better view.

“@Nasir1409” (whose account is no longer functioning), tweeted pictures from Saudi of US military training troops posing as Mujahadeen. Who are these fighters, and where do they end up are the bigger questions. Syria and Iraq seem to be the answer.

Could this explain why US Arizona Senator John McCain is so sure of who these “moderate rebels” are and where US weapons are heading? I think the answer is yes.

McCain knows his troops are training them, building relations with them, and training them in the use of weapons supplied by the US.

He doesnt care that this cell sells or trades to that brigade, or this terrorist wipes out that one taking all weapons possessed.

He knows the US military has trained a great deal of all of them, and is confident (and stupid to believe), that he would be safe among any of them. Just as no Syrian civilian is. Since he has been pictured with an organ eater, I rest my case on his knowledge of anything.

Many fighters who have since left Syria also claim that US troops are training these same militias in a US base in Qatar, however training less numbers at a time they claim. Qatar Gulf News reports the same:

Doha: At a desert base, Gulf state Qatar is covertly training moderate Syrian rebels with US help to fight both President Bashar Al Assad and Daesh and may include more overtly Islamist insurgent groups, sources close to the matter say.

The camp, south of the capital between Saudi Arabia’s border and Al Udeid, the largest US air base in the Middle East, is being used to train the Free Syrian Army (FSA) and other moderate rebels, the sources said.

Click any image to enlarge it for a larger view. 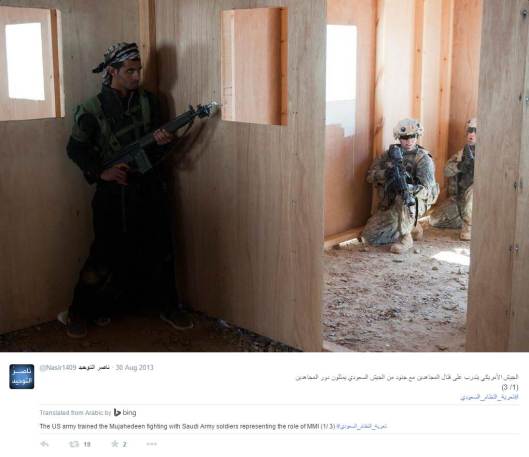 “For the third time in 5 years, U.S. Forces conducted a joint exercise in the Kingdom of Saudi Arabia as part of Friendship and Ironhawk three at the Tactical Training Center in Tabuk, Saudi Arabia, April 1-16.
(Remember, Tabuk Saudi is where Israeli planes have been known to land according to reports in 2010). 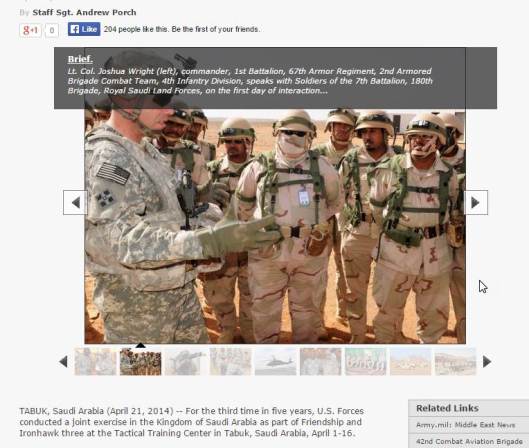 From the picture above, you can see these men pictured are the same men. Now granted, due to the shielding of the second mans face in the photo below, I cannot say for sure. But due to his shape, I feel its a very good guess.

Pictured below is the same man with a member of the Free Syrian Army, al-Farouk or Al-Farouq, a charity, or someone doing humanitarian services with Adnan Al-Aroor, the pedophile cleric kicked out of Syria years ago for raping young men.

“@Nasir1409 Nasser al-Tawhid” (whose name implies a member of the Muslim Brotherhood Al-Tawhid) was asked about US Senator John McCain’s visit to Syria, and who coordinated it. @Nasir1409 replies (with the best translation possible), “Peace be upon you and Gods mercy and blessings be upon you. My knowledge about them is scarce. Its founder is present in the United States and an office in Turkey and is active in the medical and relief work which shows me that they cover and the interface to the work done in the rough. There are dozens of these models in the Syrian revolution.” 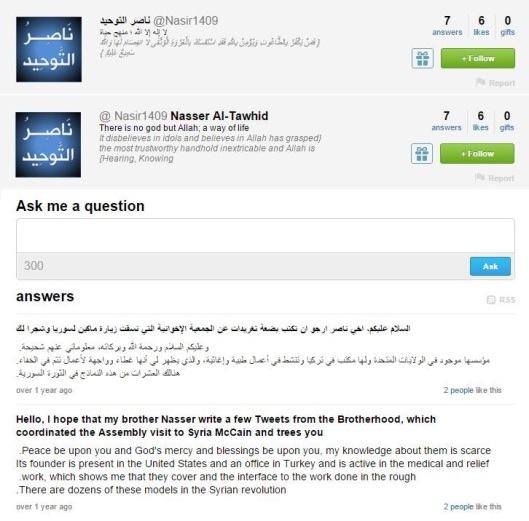 We have all known for 5 years now that Saudi, Qatar and the United States has been trying to oust the legitimate government of Syria (with massive help from Turkey and Jordan), to implant the puppets who will be servants to the United States and Saudi.

The US has promised the Muslim Brotherhood a piece of the action if they supply the cannon fodder for this proxy war. However, we know with the US naming Jabhat al-Nusra to the list of terrorist that they will never follow through with these promises to Muslim Brotherhood. Its been the strategy all along. Not the first time the US has lied.

Lets also mention that the US (with the help of its Arab friends money), will eventually take Jordan and Turkey under their control as well (much more than it is now), as part of the one world government they wish to eventually have. Even the gulf states money wont protect their people, but only their Zionist leaders who work closely with the US and Israel now anyway.

I’m sure the US thanks the gulf states for helping to remove any fighting forces within the Middle East because it will make their (the US), job much easier in the end. Thank the Gulf States for allowing the US military into their lands.

Today, they aid you, tomorrow, those same bases will own you.

4 thoughts on “Is the US Military Training Mujahadeen Alongside Training “Royal Saudi Land Forces?””