Excerpts from Syrian Arab News Agency, 7-8 May 2015 ~ Army and armed forces advanced in many regions of northern Qalamoun Mountains in Damascus countryside, carried out a series of special operations against dens of Takfiri terrorist organizations, establishing control on many hills in Assal al-Ward town which borders Lebanon.

The army killed a number of Jabhat al-Nusra terrorists and destroyed several vehicles, some of them equipped with heavy machine guns.

Meanwhile, the army also destroyed dens of terrorists in al-Mishirfeh twon, 7 km from the Lebanese borders, killing a number of terrorists.

An army unit killed scores of DAESH terrorists (Islamic State in Iraq and Syria-ISIS) in a special operation carried out against their gatherings and hideouts in the northeastern countryside of the southern province of Sweida.

A military source told SANA Thursday that an army unit bombarded ISIS gatherings and hideouts in Tloul al-Fadyayn area to the west of Asfar area in the province countryside.

The source added that the army’s operation resulted in killing a number of ISIS terrorists and destroying many of their vehicles, some equipped with various kinds of machineguns, weapons and ammunition.

The army units in cooperation with the popular defense groups work for cutting off the Takfiri terrorist organizations’ supply routes and prevent exploiting al-Badia (desert) in Sweida province to transport terrorists , weapons and ammunition across this area.

Earlier Wednesday, another army unit killed scores of terrorists and injured others in a tight ambush in the vicinity of Tal al-Khaledyeh in the northeastern countryside of the province.

On Wednesday night, an Army unit seized amounts of weapons and ammunition in an ambush against an armed terrorist group near Tal al-Khaldiya village in Sweida northern countryside.

A field source told SANA that the ambush caused the death of tens of terrorists who were carrying weapons and ammunition from al-Lajat area to Damascus Countryside.

MORE MILITARY REPORTS FROM DIFFERENT AREAS IN THE COUNTRY

Units of the army and armed forces destroyed dens of Jabhat al- Nusra terrorist organization and other Takfiri organizations supported by Saudi regime and have contacts with the Israeli enemies, in countrysides of Daraa.

Many terrorists of Takfiri organizations were killed and their weapons and ammunition were destroyed in a special military operation targeted their movements between Kherbet Ghazale town and Iman gas station, some 20 Kilometers to the northeast of Daraa province, the source said.

Takfiri terrorist organization admitted on their social media pages killing of a number of  their members including Abdul-Rahman Imad Eid.

A number of terrorists were killed and many others were injured during Army operations that targeted dens belonging to Jabhat al-Nusra in Zimrin and Samlin villages in the northwestern countryside of Daraa.

Terrorist organizations suffered heavy losses and their vehicles were destroyed during the Army’ strikes.

In the countryside of the neighboring province of Quneitra, an army unit targeted dens of terrorist organizations, killing and injuring a number of their members and destroying their vehicles in the town of Mashara located between the two provinces of Daraa and Quneitra.

Meanwhile, Takfiri terrorist organization admitted on their social media pages killing a number of their ranks, among them Moaaz Nawaf Al-Heraki and Ali Khaled Al-Zoubi.

The army air force raided a number of vehicles, killed scores of ISIS terrorists to the east of Sha’er and Jazal fields and in al-Qunaiterat, salim and Abu al-Slasel in Homs eastern countryside.

In the central province of Hama, Army units established control over a number of important points in the northwestern countryside of the province, eliminating dozens of terrorists in the area surrounding al-Sirmaniya, Ghania and Ishtabrak villages.

The army shot down a reconnaissance plane, destroyed a vehicle equipped with a heavy machine gun and killed a number of terrorists near the air force academy in Aleppo.

Earlier, the army air force destroyed vehicles for terrorist organizations and eliminated many of their members in the area surrounding the Air Force Academy in Aleppo.

The army air force destroyed tens of vehicles, eliminated all terrorists onboard on Jisr al-Shughour-Ayn al-Sawda road in Idleb countryside.

In the northern countryside of the coastal province of Lattakia, Army units  carried out concentrated strikes against dens of Jabhat al-Nusra and the so called “Ahrara al-Sham” and other terrorist organizations in the villages of Jeb al-Ahmar, Marj Khoukha and Salma bordering the Turkish borders, the source added .

The operations resulted in killing a number of terrorists and destroying a lot of vehicles equipped with machine-guns in addition to rocket and mortar launchers and bases which the terrorists used to launch mortar shells on the residential areas.

in the eastern province of Deir Ezzor, an army unit destroyed many dens of the Islamic State in Iraq and Syria (ISIS) in al-Hawiqa neighborhood in Deir Ezzor, eliminated a number of their members and injured many others, the military source added. 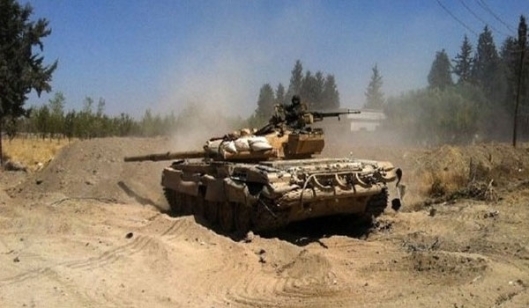 Excerpts from Electronic Resistance, 8 May 2015 ~  Last Thursday morning, the Syrian Arab Army’s 5th Armored Division – in coordination with the National Defense Forces (NDF) and Palestine Liberation Army (PLA) – laid a powerful ambush on a large Islamist rebel contingent traveling through the hills of Al-Khalidiyah in the As-Sweida Governorate.

The militants from the Syrian Al-Qaeda group “Jabhat Al-Nusra” and their allies from “Liwaa Al-Yarmouk” and the Free Syrian Army (FSA) were traveling through Al-Khalidiyah in order to transport a multitude of Israeli and American manufactured weapons to their fighters entrenched in the northern countryside of As-Sweida.

Video evidence from the ambush was released by members of the NDF, which depicted approximately 30 armed militants traveling through a desolate area in Al-Khalidiyah before a roadside bomb was detonated by the Syrian Armed Forces; this resulted in the death of all the Islamist fighters traveling in the convoy.

After the ambush, members of the Syrian Armed Forces inspected the site, discovering a large cache of heavy weaponry that included American made anti-tank TOW missiles, assault rifles, ammunition, and rocket propelled grenades.

3 thoughts on “Syrian army captures Israeli and U.S. weapons from mercenary-terrorists in as-Sweida”