The outcome of the war in Ukraine will be decided by special operations forces. And not Ukrainian.

Wiki: Special operations (S.O.) are military operations that are considered “special” (that is, unconventional), usually carried out by dedicated special forces units.

Special operations are performed independently or in conjunction with conventional military operations. The primary goal is to achieve a political or military objective where a conventional force requirement does not exist or might adversely affect the overall strategic outcome. Special operations are usually conducted in a low-profile manner that aims to achieve the advantages of speed, surprise, and violence of action against an unsuspecting target. Special ops are typically carried out with limited numbers of highly trained personnel that are able to operate in all environments, utilize self-reliance, easily adapt to and overcome obstacles, and use unconventional combat skills and equipment to complete objectives. Special operations are usually implemented through specific, tailored intelligence.[1]

The decade 2003–2012 saw U.S. national security strategy rely on special operations to an unprecedented degree. Identifying, hunting, and killing terrorists became a central task in the Global War on Terrorism (GWOT). Linda Robinson, Adjunct Senior Fellow for U.S. National Security and Foreign Policy at the Council on Foreign Relations, argued that the organizational structure became flatter and cooperation with the intelligence community was stronger, allowing special operations to move at the “speed of war”.[2] Special Operations appropriations are costly: Its budget went from $2.3 billion in 2001 to $10.5 billion in 2012.[2] Some experts argued the investment was worthwhile, pointing to the raid in May 2011 that killed Osama bin Laden in Abbottabad, Pakistan. Others claimed that the emphasis on Special Operations precipitated a misconception that it was a substitute for prolonged conflict. “Raids and drone strikes are tactics that are rarely decisive and often incur significant political and diplomatic costs for the United States. Although raids and drone strikes are necessary to disrupt dire and imminent threats…special operations leaders readily admit that they should not be the central pillar of U.S. military strategy.”[2]Instead, Special Operations commanders stated that grand strategy should include their “indirect approach”, which meant working with non-U.S. partners to accomplish security objectives. “Special Operations forces forge relationships that can last for decades with a diverse collection of groups: training, advising, and operation alongside other countries’ militaries, police forces, tribes, militias or other information groups.”[2]

[How about the Right Sector and volunteer battalions, whose resources are so envied by the Ukrainian military, in light of recent revelations that Kolomoisky is simply a front for US financing? – Kristina Rus]

The recent events in Donbass deserve a closer look.

The disturbing chronicle is as follows:

For now we will make another assumption. All winter military analysts on both sides of the front fed us with forecasts: the snow will melt, the thaw will be over, and the war for Donbass will ignite with a new force.

And what? The snow is long gone, the land in those parts had dried up a month ago. But no one is going on the offensive, the parties are limited only to shooting weapons of all calibers.

The issue is that the nature of the civil war in Ukraine has changed dramatically.

Vladimir Putin already clearly stated that he will not allow anyone to destroy People’s Republics of Donbass. But Petro Poroshenko is not only unable to give his military the command “Stop!”, but even has no right to soften the hawkish rhetoric in Kiev. In this case, the President will simply choke on the smoke from burning tires. So all fall and winter both sides of the confrontation were digging trenches, building bunkers, mined fields, resupplied, trained and equipped combat units. This gigantic work produced a result.

At the front formed a kind of military parity, when any attempt to advance is fraught with high losses, but does not guarantee any reasonable result. What may be the goal of any offensive today? As for the militia, and for the Ukrainian military?

The militia decided not to go to Kiev last year. Did not take Mariupol, although they were just two steps away from it. In turn, the Ukrainian army and volunteer battalions unsuccessfully and incompetently fought all fall for a tiny (even at the scale of this war) Donetsk airport. How could this army seriously at least try to take control of the metropolis of one million people? Yeah, on the streets of a hostile Donetsk alone a 60 thousand-strong group that is involved on the part of Kiev in the so-called ATO will just dissolve, melt away and will be beaten by the enraged townspeople. And there are still Lugansk, Gorlovka, etc. Where can the Ukrainian military score so many garrisons?

So is it coming down to a so-called frozen conflict in Donbass? Like Transnistria? If there was no one standing behind Poroshenko’s regime, it would have most likely happened. But far beyond the borders of Ukraine there are many forces that need endless war in these parts.

Let’s skip the politicians and take the military — they are more frank and “militarily” straight forward. For example, U.S. Lieutenant General John Mulholland, from January 2015, the Deputy Director of CIA for military affairs. In a recent meeting with influential politicians in Washington, he declared that “everything must be done to draw Russia into a war with Ukraine”. 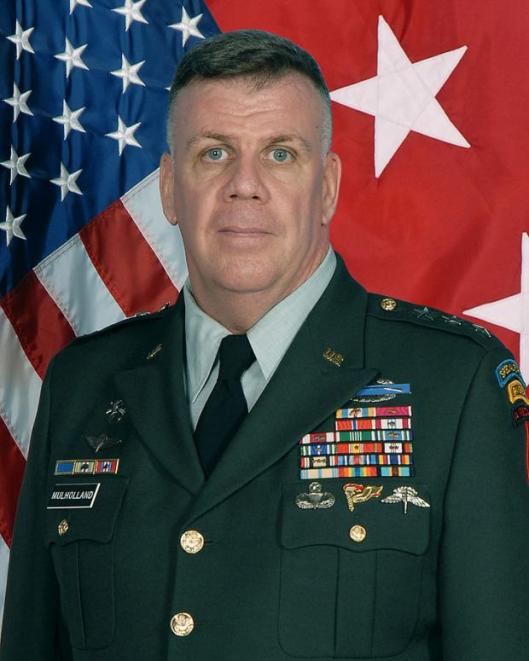 How can in such a difficult and risky business  General Mulholland help personally? Oh, he has skills. In recent past, the current deputy director of the CIA served as the deputy commander of special operations forces of the Armed forces of the United States. That is, Mulholland for four years supervised professional saboteurs and spies. Strangely after his joining the CIA it appeared that special operations forces today bear the brunt of the fighting in Donbass.

If so, than these are certainly not Ukrainian special ops. But if there are Ukrainian subversive groups in Donbass, then they are just a back up of the others. Because Kiev had only just begun to create their own special units of this type (“SP” wrote in detail in April about it).

However, the Ukrainian General staff for several months had a special ops directorate. There’s even a commander — Colonel Sergey Krivonos. But it is only in the beginning of the way.

At least in April Krivonos said:

“We have a deadline, so we have to start creation of special operations forces as soon as possible and not talk, but act concretely.”

Who, then, is fighting instead of Krivonos, who has a deadline? We will look through the old binders. For example, here is a report from July of last year. In an atmosphere of extreme secrecy 180 commando-instructors arrived in Kiev from the American special ops base in Fort Benning (GA). All speak Russian fluently. Foreign guests, without delay, were transferred to Mariupol, where they commenced the training of Ukrainian students. But we don’t know if the organized by Americans Mariupol special purpose courses are only about theory? Or is there supposed to be battle practice? And if Yes, then do the guests from the USA participate? 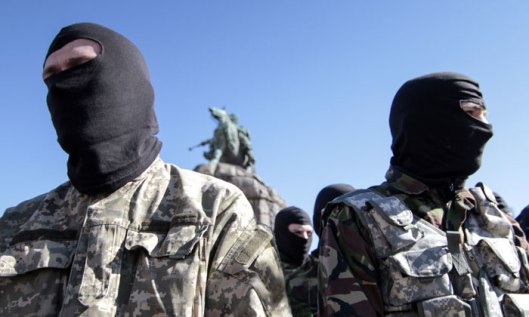 Second. There is a ton of information that the Georgian forces, already graduated from the Fort Benning school, are swarming in Donbass. For example, take the headline story of the capture on May 16 near the city of Schastje of the two wounded either former or current Russian special ops fighters from the 3rd brigade of GRU of the General staff of the Russian Armed forces, captain Evgeny Erofeev and Sergeant Alexander Alexandrov.

In Ukraine a debate is raging: who had really captured our military? Who should receive the medals? Personnel of the 92nd mechanized brigade of the armed forces or the 24-th attack battalion “Aidar”? And maybe members of the military counterintelligence of SBU?

However, here is a comment of the deputy corps commander of the Ministry of Defence of DPR, Eduard Basurin:

“There is a reason for all this confusion of Kiev, about who exactly participated in the capture of these fighters: soldiers of the 92nd brigade of the Ukrainian armed forces, or punishers from “Aidar”, or SBU. According to updated information of our intelligence, that day in the area there was a subversive group of Georgian spetsnaz”.

Basurin said that the base camp of Georgian spetsnaz operates under the cover of a training center of the Ukrainian national guard and is located in the district of Severodonetsk.

So its existence was only known to the SBU. Neither 92nd brigade, nor “Aidar” knew about it. Therefore, having participated in the overall battle, they believe that when they shout in Kiev “Glory to the heroes!”, it is about them. And only them.

Note that reports about the participation of Georgian commandos broke through the veil of military secrecy even before. It was reported in the press that Alexander Grigolashvili who died in Donbass on December 18, 2014 served in the special forces of the Ministry of Defense of Georgia. Even earlier, in the battle for the Donetsk airport was killed either former or current Georgian commando Tamaz Sukhiashvili.

[Interestingly, one of the most famous Novorossia commanders Givi is Georgian, who grew up in Donbass, as many people of the Soviet Union moved freely and settled outside of their home Republics – Kristina Rus]

There is even more evidence about the participation in the fighting in the South-East of Ukraine of special forces from Poland. So, on December 8 of last year, militia radio intelligence intercepted conversations of the enemy in Polish language. And after a few hours, on the night of December 9, 11 kilometers from the settlement of Nikishino there was a clash with a subversive group of eight people. All of them were killed. A detailed examination discovered stripes of the special forces regiment “Jednostka Wojskowa Komandosów” of the Armed forces of Poland.

On June 26, 2014 near the height of Saur-Grave a sniper from Poland was killed, the latest large-caliber American rifle was found by his side. Such weapons are used only by spetsnaz.

Earlier, on June 16, 2014, at the crash site of the downed by militia military transport aircraft Il-76 of the Ukrainian air force many charred documents in Polish were found.

Although, whether it was a foreign spetsnaz or ordinary mercenaries, is impossible to conclude. However — it’s a possibility.

According to militia intelligence, there are nineteen (19) subversive groups operating today on the side of the enemy, formed from the commandos arrived from beyond the borders of Ukraine.

It is obvious that in the coming months they will not let the war for Donbass fade away.

No matter what the politicians say.