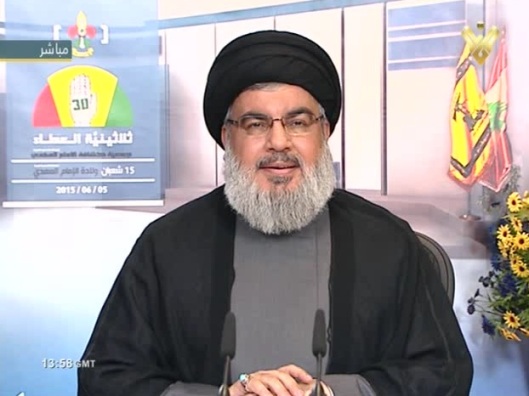 Hezbollah Secretary General Sayyed Hasan Nasrallah warned the Israeli enemy on Friday of displacing millions of the Zionist settlers in any possible war that may be imposed on Lebanon, stressing that the Zionist home front is not immune to wars anymore, and that all the threats waged by a number of Zionist officials lately are part of the psychological war that “we have become accustomed to since the establishment of this entity.”

Speaking at the celebration marking the thirty-year anniversary of founding the Imam Mahdi (as) Scouts in the southern suburbs of the Lebanese capital, Sayyed Nasrallah addressed the Israelis, urging them to realize that they have a defeated army that cannot deter the Resistance capabilities.

“You are admitting in this drill that you have a defeated army by saying that the resistance is able to reach all the areas where the exercises are taking place,” his eminence said, noting that the enemy leadership and people know this fact very well, stressing that the recent Zionist threats will have no effect on Hezbollah, according to an inclusive report by al-manar. TV website..

“Hezbollah is not preoccupied by the Qalamoun battles. Qalamoun has nothing to do with this matter,” he said, urging the Lebanese not to become afraid of these threats.

Hezbollah fighters have been engaged in fierce battles in the Qalamoun area on border with Lebanon, liberating the Syrian region from the operating terrorist groups by clearing the highest mountain, Moses Hill, from all takfiri operatives.

Sayyed Nasrallah made it clear that “the time in which Israel destroyed our homes and our infrastructure and keep its homes and infrastructure has ended, and that what is coming is greater than the 2006.”

“If you are threatening to deport a million and a half Lebanese, the Resistance will displace millions of Zionists. We are not afraid of your war nor your threats,” he told the Israeli authorities.

“I clearly say to Israel: the Resistance threatens to displace millions of Israelis in the next war if imposed on Lebanon,” his eminence warned, reassuring that such threats are just the loud voice that reflects the enemy’s anxiety and its fear of Resistance.

Touching upon Arsal and Qalamoun battles in the border areas between Lebanon and Syria, Sayyed Nasrallah reviewed how the Lebanese domestic politics tackled the security situation in the area, underlying that Hezbollah was clear from the very beginning and didn’t say that he will enter the town of Arsal.

“We always used to say that this town [Arsal] has been occupied and its liberation is the responsibility of the Lebanese state and army,” Sayyed Nasrallah stated, adding that the Lebanese people “are hopeful that the army would bear this great national responsibility.”

“We were very clear regarding Arsal barrens. Here we are standing before a malignant form of political hypocrisy, political disinformation and political recruitment,” his eminence said, recalling that  there are people who invented a battle named Arsal and came out to defend it.

“They are assuming that Hezbollah wants to enter to the town of Arsal, but this is untrue and hypocrisy,” he stressed, urging those who are resorting to sectarian mobilization to get rid of that action.

As for Arsal barrens, Sayyed Nasrallah stated that the battle occurred early because of the gunmen attack on the posts of Syrian army and the Resistance in Younin barrens “in a direct field attack.”

“We are not invaders, but liberators and resistance,” Hezbollah secretary General emphasized, highlighting that the battles narrate the victories achieved by the Resistance fighters over tens of kilometers of the liberated lands in the area, praising the solidarity expressed by the families and clans of Baalbek who showed their support for the Resistance and their readiness to sacrifice.

Sayyed Nasrallah thanked all people who expressed their solidarity with Hezbollah, and refuted rumors on the party’s intention to form brigades or to declare the popular mobilization, stressing that the battle of Arsal will make the task of Lebanese army easier and will ease its burdens.

Moreover, his eminence said he would not talk “about the time for the completion of the battle,” elaborating that Hezbollah “does not want to approach the town of Arsal, and that the battle will continue until the liberalization of barrens.

“Don’t ask us about the time needed. Time is determined by the battle commanders on ground.”

“We launched the battle of Arsal barrens and we are not bound by a specific time, but we are interested in accomplishing the goal with the least human sacrifices possible. We are not in a rush,” his eminence elaborated.

Addressing the Lebanese government, Hezbollah leader called on the officials and ministers to bear their responsibilities and take things seriously, without waiting for changes in Yemen, Iraq or the region.

Turning to the so-called ‘Islamic State of Iraq and the Levant’ (ISIL) takfiri group and the media reports about the party that created it since its emergence,  Sayyed Nasrallah expressed surprise after media reports published after the Saudi terrorist suicide bombings to claim that Iran, Syria or Hezbollah have created ISIL and support it.

“Is it rational that the Islamic Republic of Iran, which is accused of spreading Shiism and everything related to it, stands behind Daesh (Arabic acronym of ISIL)? his eminence asked.

“This talk is senseless… It is very ridiculous,” he went on to say, recalling the history of ISIL which is the Iraqi branch of al-Qaeda terrorist group, but defected over disputes on power in Syria.

“The whole world knows that al-Qaeda was created by the United States, the Saudi Arabia and the Pakistani intelligence… The US admits that, while the world acts as if ISIL is an imminent danger,” Sayyed Nasrallah revealed, hoping that everyone will help in diagnosing the enemy.

“ISIL is being fought by the parties that are accused of creating it, i.e. Iran and Syria, while other parties fund it and sell its oil,” he said.

“ISIL is believed to be a threat to the world. However, there are people in Lebanon who argue whether ISIL poses a threat to Lebanon or not,” he added, pointing out that ISIL does not only exist in Palmyra, Raqqa or Mosul, but it is in Arsal barrens as well.

On the Saudi-US aggression on Yemen, Hezbollah Secretary General reiterated the party’s position that supports the people and the army of the Arab state, categorically rejecting the Saudi military intervention that is persistent for 72 days ago.

“This aggression is very clear and obvious, and if anyone vetoed it objectively, the Saudi regime would work with all the institutional means and threats to silence such voices. It does not want anyone to open mouth and condemn the aggression.”

“In every moment we condemn this brutal and barbaric Saudi-US aggression against the Yemeni people. This position will not change as long as the aggression is persistent,” Sayyed Nasrallah stressed, asking about the horizon that this attack might have later on.

“What is the horizon of this aggression? Destruction, murder and bloodshed are not symbols of strength. All the announced goals were not materialized, and despite his high demands, the [fugitive] Yemeni President is now obliged to go to Geneva because there has no other solution,” his eminence pointed out.

Sayyed Nasrallah congratulated all Muslims and audience on the birth anniversary of Imam Mahdi (as), the twelfth Imam of Prophet Mohammad’s household, and Imam al-Mahdi Scouts on their founding anniversary.

His speech was delivered live on a screen and was watched by all leaders and members of the Scouts in several cities across Lebanon, including Beirut, Tyre, Nabatieh and Bekaa.

2 thoughts on “Sayyed Nasrallah: “Hezbollah Will Displace Millions of Zionists in Next War on Lebanon””