Saudi soldiers are running away from their positions to avoid confrontation with invading Yemeni troops after the latter pushed deep into the kingdom’s border city of Najran on Tuesday.

Reports said the Yemeni soldiers have made huge, but easy gains in their battle against the monarchy’s troops in Najran heights, forcing them to escape the the battlefront in disordered fashion.

The reports added that the kingdom’s forces have deserted their posts in the region, retreating from their territories.

Dispatches said several attempts by ranking Saudi commanders to rearrange the troops to form new frontlines miles back deep into the Saudi territories have failed.

Two soldiers have told tribal settlers that they have seen comrades shot in the back by senior officers to dissuade the chaotic escape from the battlefield. 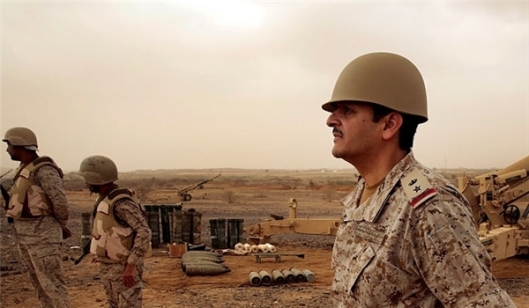 Earlier today, the Yemeni troops warned off Saudi soldiers as they approached to recapture Jizan’s military base that has recently fell into the hands of Ansarullah popular fighters.

The reports added that the Saudi troops carried out an attack to gain control over a military base in al-Tawaliq Mountain area, but were pushed back by the Yemeni fighters.

The entire military equipment of the Saudi forces including 4 tanks was destroyed and the soldiers fled the battlefield during the counterattack that ended up in complete fiasco.

Yemeni tribal forces, backed by army units and Ansarullah fighters, have launched a series of new attacks on the Saudi border cities in retaliation for Saudi Arabia’s ongoing aggression against the impoverished Arab country.

Saudi Arabia has been bombing Yemen in the last 76 days to bring its ally, fugitive president Mansour Hadi, back to power.

The airstrikes have so far claimed the lives of more than 4,433 civilians, mostly women and children.

According to a recent report by Freedom House Foundation, most of the victims of the deadly Al Saud campaign are civilians, including a large number of women and children.

2 thoughts on “Saudi forces deserted their posts, retreating from their territories, to avoid confrontation with Yemen’s Ansarullah fighters”