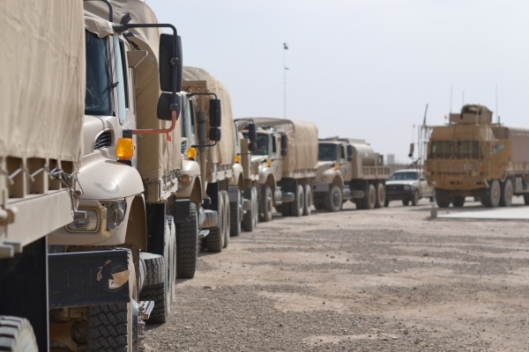 The other half of the war is logistics. Without a steady stream of supplies, armies no matter how strong or determined will be overwhelmed and defeated. What explains then ISIS’ fighting prowess and the immense logitical networks it would need to maintain it?

(Tony Cartalucci – NEO) – Since ancient times an army required significant logistical support to carry out any kind of sustained military campaign. In ancient Rome, an extensive network of roads was constructed to facilitate not only trade, but to allow Roman legions to move quickly to where they were needed, and for the supplies needed to sustain military operations to follow them in turn.

In the late 1700’s French general, expert strategist, and leader Napoleon Bonaparte would note that, “an army marches on its stomach,” referring to the extensive logistical network required to keep an army fed, and therefore able to maintain its fighting capacity. For the French, their inability to maintain a steady supply train to its forces fighting in Russia, and the Russians’ decision to burn their own land and infrastructure to deny it from the invading forces, ultimately defeated the French.

Nazi Germany would suffer a similar fate when it too overextended its logical capabilities during its invasion of Russia amid Operation Barbarossa. Once again, invading armies became stranded without limited resources before being either cut off and annihilated or forced to retreat.

And in modern times during the Gulf War in the 1990’s an extended supply line trailing invading US forces coupled with an anticipated clash with the bulk of Saddam Hussein’s army halted what was otherwise a lighting advance many mistakenly believed could have reached Baghdad had there been the political will. The will to conquer was there, the logistics to implement it wasn’t.

The lessons of history however clear they may be, appear to be entirely lost on an either supremely ignorant or incredibly deceitful troupe of policymakers and news agencies across the West.

The current conflict consuming the Middle East, particularly in Iraq and Syria where the so-called “Islamic State” (ISIS) is operating and simultaneously fighting and defeating the forces of Syria, Lebanon, Iraq, and Iran, we are told, is built upon a logistical network based on black market oil and ransom payments.

The fighting capacity of ISIS is that of a nation-state. It controls vast swaths of territory straddling both Syria and Iraq and not only is able to militarily defend and expand from this territory, but possesses the resources to occupy it, including the resources to administer the populations subjugated within it.

For military analysts, especially former members of Western armed forces, as well as members of the Western media who remember the convoys of trucks required for the invasions of Iraq in the 1990s and again in 2003, they surely must wonder where ISIS’ trucks are today. After all, if the resources to maintain the fighting capacity exhibited by ISIS were available within Syrian and Iraqi territory alone, then certainly Syrian and Iraqi forces would also posses an equal or greater fighting capacity but they simply do not. 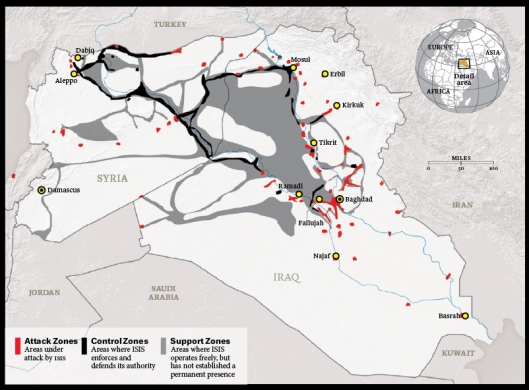 And were ISIS’ supply lines solely confined within Syrian and Iraqi territory, then surely both Syrian and Iraqi forces would utilize their one advantage – air power – to cut front line ISIS fighters from the source of their supplies. But this is not happening and there is a good reason why.

Terrorists and weapons left over from NATO’s intervention in Libya in 2011 were promptly sent to Turkey and then onto Syria – coordinated by US State Department officials and intelligence agencies in Benghazi – a terrorist hotbed for decades.ISIS’ supply lines run precisely where Syrian and Iraqi air power cannot go. To the north and into NATO-member Turkey, and to the southwest into US allies Jordan and Saudi Arabia. Beyond these borders exists a logistical network that spans a region including both Eastern Europe and North Africa.

The London Telegraph would report in their 2013 article, “CIA ‘running arms smuggling team in Benghazi when consulate was attacked’,” that:

[CNN] said that a CIA team was working in an annex near the consulate on a project to supply missiles from Libyan armouries to Syrian rebels.

Weapons have also come from Eastern Europe, with the New York Times reporting in 2013 in their article, “Arms Airlift to Syria Rebels Expands, With Aid From C.I.A.,” that:

From offices at secret locations, American intelligence officers have helped the Arab governments shop for weapons, including a large procurement from Croatia, and have vetted rebel commanders and groups to determine who should receive the weapons as they arrive, according to American officials speaking on the condition of anonymity.

And while Western media sources continuously refer to ISIS and other factions operating under the banner of Al Qaeda as “rebels” or “moderates,” it is clear that if billions of dollars in weapons were truly going to “moderates,” they, not ISIS would be dominating the battlefield.

Recent revelations have revealed that as early as 2012 the United States Department of Defense not only anticipated the creation of a “Salafist Principality” straddling Syria and Iraq precisely where ISIS now exists, it welcomed it eagerly and contributed to the circumstances required to bring it about.

While many across the West play willfully ignorant as to where ISIS truly gets their supplies from in order to maintain its impressive fighting capacity, some journalists have traveled to the region and have video taped and reported on the endless convoys of trucks supplying the terrorist army.

Were these trucks traveling to and from factories in seized ISIS territory deep within Syrian and Iraqi territory? No. They were traveling from deep within Turkey, crossing the Syrian border with absolute impunity, and headed on their way with the implicit protection of nearby Turkish military forces. Attempts by Syria to attack these convoys and the terrorists flowing in with them have been met by Turkish air defenses.

Germany’s international broadcaster Deutsche Welle (DW) published the first video report from a major Western media outlet illustrating that ISIS is supplied not by “black market oil” or “hostage ransoms” but billions of dollars worth of supplies carried into Syria across NATO member Turkey’s borders via hundreds of trucks a day.

The report titled, “‘IS’ supply channels through Turkey,” confirms what has been reported by geopolitical analysts since at least as early as 2011 – that ISIS subsides on immense, multi-national state sponsorship, including, obviously, Turkey itself.

Looking at maps of ISIS-held territory and reading action reports of its offensive maneuvers throughout the region and even beyond, one might imagine hundreds of trucks a day would be required to maintain this level of fighting capacity. One could imagine similar convoys crossing into Iraq from Jordan and Saudi Arabia. Similar convoys are likely passing into Syria from Jordan.

In all, considering the realities of logistics and their timeless importance to military campaigns throughout human history, there is no other plausible explanation to ISIS’s ability to wage war within Syria and Iraq besides immense resources being channeled to it from abroad.

If an army marches on its stomach, and ISIS’ stomachs are full of NATO and Persian Gulf State supplies, ISIS will continue to march long and hard. The key to breaking the back of ISIS, is breaking the back of its supply lines. To do that however, and precisely why the conflict has dragged on for so long, Syria, Iraq, Iran, and others would have to eventually secure the borders and force ISIS to fight within Turkish, Jordanian, and Saudi territory – a difficult scenario to implement as nations like Turkey have created defacto buffer zones within Syrian territory which would require a direct military confrontation with Turkey itself to eliminate.

With Iran joining the fray with an alleged deployment of thousands of troops to bolster Syrian military operations, overwhelming principles of deterrence may prevent Turkey enforcing its buffer zones.

What we are currently left with is NATO literally holding the region hostage with the prospect of a catastrophic regional war in a bid to defend and perpetuate the carnage perpetrated by ISIS within Syria, fully underwritten by an immense logistical network streaming out of NATO territory itself.

Tony Cartalucci, Bangkok-based geopolitical researcher and writer, especially for the online magazine“New Eastern Outlook”.  Electronic analytical journal New Eastern Outlook 2010-2015. Republishing of the articles is welcomed with reference to NEO. The views of the authors do not necessarily coincide with the opinion of the editorial board.