A number of terrorist, who were caught recently in Aleppo , confessed to receive military training in Turkey by U.S, Saudi and Qatari personnel.

In interviews broadcast by the Syrian TV on Sunday, terrorist Ahmad Mustafa Mastari said he worked within a terrorist group for 4 months before attending a 45-day training course in Salqin, Idleb and later they headed to Turkey where they received military training by U.S, Saudi and Qatari personnel for 30 days and returned to Aleppo.

“I was among the force that attacked Jam’yat al-Zahraa in Aleppo, we were about 250 persons, but the operation failed and we were arrested by the army” Mastari said.

He added “I had fought in al-Qarmid camp, Wadi al-Daif in Idleb, Kifr Nabouda in Hama and later we went to Saladin neighborhood in Aleppo where we were shelling the area,  then putting the dead bodies inside the buildings”.

Another Terrorist called Zakaraya Sharraq al-Zait said planning for the latest attack on Aleppo began about 3 weeks ago, adding that his 60-member group infiltrated into some buildings but the army besieged the area and caught all who were still alive. 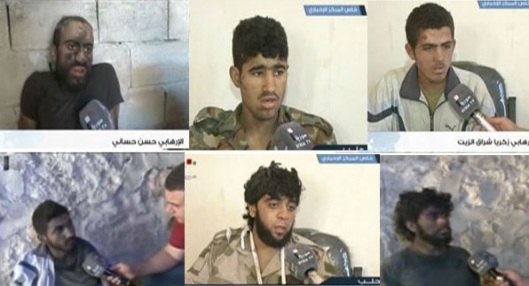 Terrorist Mohammad Aqel Akk said U.S, Qatari and Saudi personnel trained them for 45 days in Salqin, Idleb and later they went to complete their training in Turkey where every trainee was given USD 200.
“We then returned to Aleppo and commenced a huge attack on army posts in Aleppo, but our operation was a failure and we got caught,” he added.

Terrorist Hassan Hassani said his 60-member group tried to attack Jam’yat al-Zahraa area in Aleppo but they failed and got caught.

Terrorist Yousef Ismael Qanti said about 600 gunmen from different groups attacked al-Zahraa neighborhood, and the operation failed and he was injured and arrested later.

Terrorist Qasem Abdullah said he spent 5 months training in Turkey and was receiving SYP 15,000 per month, adding that he was among a group of 50 gunmen who took part in the attack and that they failed.

“A number of us, including me, were injured in the attack and we decided to surrender to the army” he said.

1 thought on “Mercenary-terrorists confess being trained in Turkey by US, Qatari and Saudi personnel ~ [Report & Video]”