Russia may resume $1.6bn oil and gas projects in Syria

Russian business would consider resuming energy contracts in Syria worth $1.6 billion if the country manages to stabilize from its civil war, explains the executive director of the Russian Union of Gas and Oil Industrialists.

“If military actions cease and the situation becomes stable in Syria, Russian companies that have frozen their work because of the civil war will be ready to renew their activity within a short period of time in realizing projects that were signed before the crisis with a value of no less than $1.6 billion,” Gissa Guchetl said in an interview with RIA Novosti published Monday.

Last week, Guchetl met Syrian Prime Minister Wael Halqi and Petroleum and Mineral Resources Minister Suleiman Abbas in Damascus. The ministers were interested in loading the refineries in Banias and Tartous and stockpiling oil products for the winter.

The Syrian government thanked Russian engineering construction company Stroytransgaz, and oil producer Tatneft and other companies for their activities in the country, including maintenance work and the restoration of gas lines, damaged by terrorists.

Putin: It’s strange when we have to deal with the US in order to discuss issues with Europe

Russia: Putin wishes Europe had “real independence and sovereignty” from US foreign policy

President Putin: “Europe should be more independent, defend own interests”

(Putin said Europe needs to be less beholden to military blocs and the United States, in its foreign policy. He noted that Washington has been pursuing an imperial policy for a long time, which would hurt its interests and global image. The Russian leader also expressed hope that the green continent wouldn’t see another war in the future, adding he’s interested in resolving the crisis in Ukraine through dialogue and cooperation. Russia and the West are at odds over the Ukrainian conflict that has claimed the lives of at least 65-hundred people since 2014).

“It would be great to see Europe show more independence and sovereignty, and the ability to stand up for its national interests – the interests of its peoples and countries,” Putin said in an interview with RTS published on Monday.

He added that he “hopes” another war in Europe is not in the cards.

The Russian leader added that a certain level of sovereignty is undoubtedly lost when joining any “any military-political organization [or] military-political bloc.” Putin noted that “France withdrew from NATO in order to preserve its sovereignty to a greater extent than would have been possible had it been part of the organization,” referring to the French withdrawal from NATO in the 1960s. France fully returned to the military bloc only in 2009. 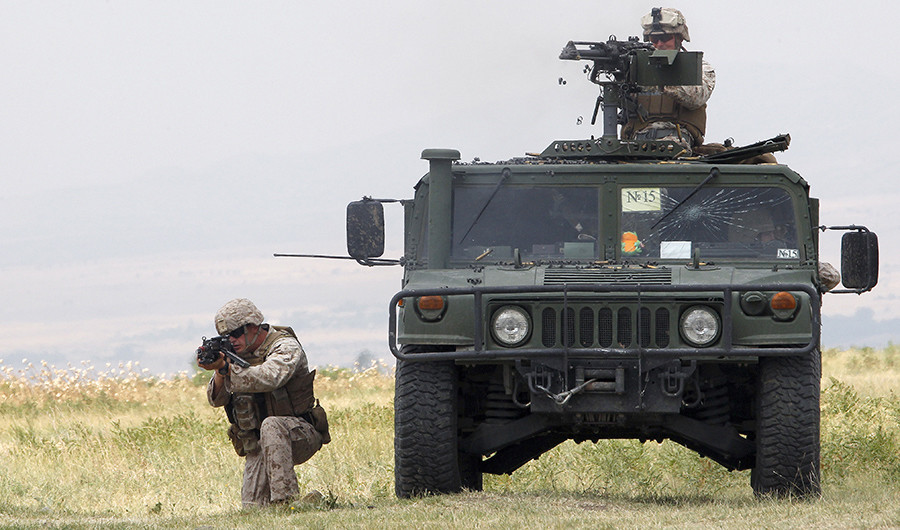 US marines take part in a joint military exercise with NATO members, called “Agile Spirit 2015” at the Vaziani military base outside Tbilisi, Georgia © David Mdzinarishvili / Reuters

3 thoughts on “Russia will resume soon oil and gas projects in Syria ~ Putin: “Europe should be more independent in defend own interests””