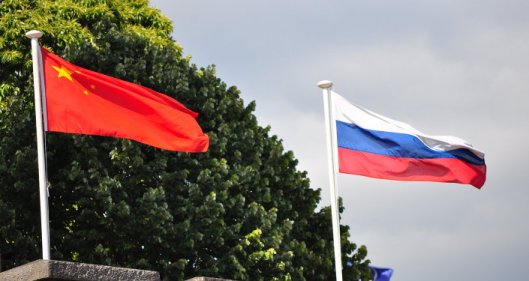 The last 2-3 September visit to China by Russian President Vladimir Putin’s continued execution of the strategic alliance between the two great Eurasian powers.

Relations between Russia and China in the past after the collapse of the Soviet Union took place during a long period of evolution. Vague 90-e in an attempt to integrate the loser in the Cold War countries in the Western world on an equal footing with the winners expected to zero ended in nothing. The completion of this period was marked by the Munich speech of Vladimir Putin in 2007 year. But the relations with the West geopolitics post-Yeltsin Russia is not exhaustive. At the same time, Russia began to develop alternative geopolitical vectors.

Firstly, in 2001, with the aim of economic integration in the region, together with China, Kazakhstan, Tajikistan, Kyrgyzstan and Uzbekistan Moscow founded the Shanghai Cooperation Organization. Let me remind you that before, in 1996 was formed “Shanghai Five”. Subsequent annual summits of the participants of the “Shanghai Five” were held in Moscow in the year 1997, Almaty (Kazakhstan) in the year 1998, in Bishkek (Kyrgyzstan) in 1999 year in Dushanbe (Tajikistan) in 2000 year. Initially, the SCO is not a military unit (such as NATO), or open a regular meeting of the security (such as ASEAN ARF), and occupies an intermediate position. The main objectives of the organization hailed the strengthening of stability and security over a wide area, the Unites States Parties, the fight against terrorism, separatism, extremism, drug trafficking, economic cooperation, energy partnership, scientific and cultural cooperation.

However, at the last summit, held in Ufa in July, the organization added seriously as when it entered the ranks of the two nuclear powers with great demographic potential – India and Pakistan. For full membership in the organization, after the lifting of sanctions, Iran is close, known for its difficult relations with the West. As a result, despite all the rhetoric of leaders of the SCO is gradually moving towards greater political cooperation between Member States and the United States from Eurasia extrusion. And the sooner will come the economic cooperation of the SCO among themselves, will become more urgent and political, because sooner or later the new major economic projects under its implementation will require political guarantees. And for that SCO members should be confident in each other.

Secondly, zero has been issued in BRIC: BRIC heads of state met for the first time in July 2008 year-Onsen Toyako (Hokkaido, Japan) as part of 34-G8 summit and agreed to hold a full-fledged summit, which was held in Yekaterinburg in June 2009 years. In November 2010 year sammiteG20 in Seoul, Republic of South Africa expressed its desire to join the BRIC, which happened in April 2011 years, after which the organization was renamed BRICS. Here, in contrast to the SCO potential political rapprochement between the countries is not planned. Due to a completely different geopolitical vectors of the dominant purpose of the organization exclusively economic (that is, in principle, completely satisfied with Russia), and are aimed at limiting the US financial and economic hegemony in the world. That is to say, global world insurance. Establishment of the Bank and the Fund for the Development of the BRICS BRICS is the formation of a parallel economic reality on a par with the one that was created at the end of World War II, the Anglo-Saxons to their advantage, and got its final form at Bretton Woods.

After the summit, political leaders in Ufa, Russia and China, it was decided to pair the two regional projects in which these countries are leading – the Eurasian Economic Union and the New Silk Road. Again, while you can only talk about economic cooperation between the two projects. But that is enough, because geo-political and military-political aspects of convergence has also observed with the naked eye. We are talking about the visits, Xi Jinping at the Victory Parade in Moscow 9 May this year and the current visit to Beijing, Vladimir Putin. Military-political nuances of these visits formed even for the visits themselves, and against the background of the lack of other heads of the winning anti-Hitler coalition in Moscow, in Beijing.

According to experts, “in China was a victory parade, timed to coincide with the end of the Second World War. And the most important guest in it named Vladimir Putin. The Russian president – the leader of one of the key Allied anti-Hitler coalition, which came to the Chinese parade. And the Chinese appreciate it. For them, because the victory in World War II – not just the liberation of its territory from the Japanese invaders. For China, the end of the Second World War – is the end of decades of humiliating existence of China as an international colony and the beginning of the path to the current greatness. Arriving at the parade, Putin thereby not only gave the debt Xi Jinping (who came to the Victory Parade in Moscow), but also demonstrated the recognition of China’s greatness. “

Excuses like Western leaders about his absence in Moscow and at the lack of the Beijing look ridiculous, if not insulting. Obama’s excuse about his alleged lack of due to the fact that he did not know that China celebrates 70-anniversary of the victory in World War II – to put it mildly, is beyond comprehension. And, of course, the Chinese comrades, assignees China, will never be forgotten, and only once again convinced of the correctness of the choice of deepening strategic cooperation with Russia.

Especially in this respect distinguished British “comrades” who were sent to the festival in Beijing conservative former finance minister Kenneth Clarke. Concurrently, he is the director of the Foreign Colonial Finance Facility (Foreign & Colonial Investment Trust). The signal is more than eloquent. It is unlikely that China will forgive the UK such humiliation. As well as throughout the West. The Chinese, like most Asians, people are patient and act on the principle of “patience – the best advantage of the warrior.” We will wait for the response steps of the Celestial Empire, but one thing is clear: friends are learned in trouble, and a new step in the rapprochement between China and Russia is made.

Some experts say that at the end of the celebration 70-anniversary of the victory in World War II in Moscow and Beijing “humanity – is not de jure, but de facto – divided into two camps. In the first are the United States and its allies – the so-called “collective West”, as well as their dependent territories: colonies, semi-colonies and dominions. The second – the whole rest of the world, which today is still more united around the Sino-Russian strategic alliance, issued May 9 on Red Square in Moscow and finally fixed 3 September Tiananmen Square (Gate of Heavenly Peace) in Beijing.

It would seem that China is now one in the West accuses of aggression against it is not a regime of sanctions, as has been done in relation to Russia. Why, then, none of the leaders of the Western world, except for willful Czech President Milos Zeman, did not come to Beijing? What kind of strange “taboo”? And why arrived there almost all the leaders of the world “non-Western”? The answer is simple and clear: these are the consequences of geo-strategic choice, which now had to make each State and international organization. That is to say, to cross the Rubicon or remain “on the other side. ‘”

Indeed, we can say that Moscow and Beijing are very clearly defined their roles in the confrontation with the World parasites that use the United States as the main base of its influence in the world. Moscow carries out military and political project to ensure China’s economic, China – is ready, if necessary, substitute the financial and economic arm of Russia. Therefore, Russia is at war with the United States in the military-political sphere and China – in financial and economic. Some experts try to belittle the role that Russia is in this tandem, conducting association with Russia as a security guard or a bodyguard. I have seen faithful another analogy, where Russia plays the role of the military and political roof of a powerful financial and economic state of TNCs. Because without this nuclear roof all the economic achievements of China does not stand today and the copper penny.

His aggressive and provocative behavior of the Americans themselves are leading the rapprochement of our countries and the formation of a strategic alliance. And for that, they should say a big thank you – the role of the external factor has never been in the history of excess. In this regard, of particular note is that Russia and China in a year may receive its own analog of the international depository and clearing center Euroclear.

This means that Moscow and Beijing will be able to buy stocks each other without the mediation of the western financial instruments. The new organization will not be controlled neither Brussels nor Washington, which is extremely important in geopolitical struggle.

Add to this the fast China’s willingness to start an analog system of international transfers SWIFT is not controlled again to the West, the trend completion Pax Americana is becoming very apparent.