the mercenary leader nicknamed Abu-Amer-al-Kafersousani, of the terrorist gang known as ‘Ajnad-al-Sham-Islamic-Union’, has been eliminated by the Syrian Armed Forces

Terrorist organizations also acknowledged the death of what they said was the military commander of “Ajnad al-Sham Islamic Union” in Daraya city in the countryside of Damascus.

Pictures of the dead terrorist, who was nicknamed “Abu Amer al-Kafersousani”, were also circulated on the terrorist organizations’ social media pages. 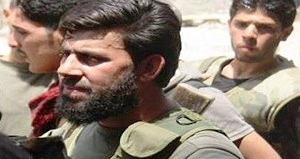 Al-Kafersousani was said by reliable sources to have succeeded to the terrorist Kasem Halaweh, the former ‘military commander’ of the terrorist gang ‘Ajnad al-Sham Islamic Union’ who was killed last Monday in Harasta, in Eastern Ghouta: these mercenaries, without homeland and without God, do not last long.

At least 12 terrorists from the same group were confirmed dead by the hands of the Syrian Arab Army soldiers in Daraya.

Nothing can stop the guys of the Syrian army, and Syria will soon be freed from all renegades and mercenaries in the service of the Zionists, USA and all their allies.