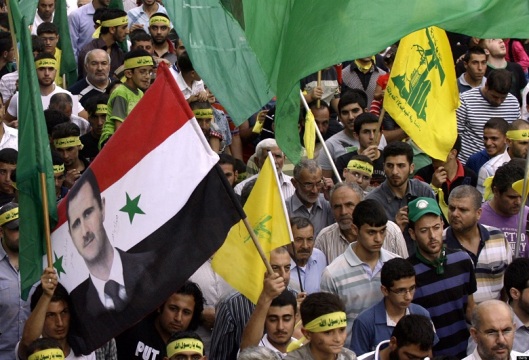 (SANA) ~ Secretary General of the Lebanese Hezbollah Movement Hassan Nasrallah said Syria’s steadfastness and its allies’ support and the backfiring of terrorism on its supporters have forced a change in the international stance on Syria.

Speaking in an interview with the Lebanese al-Manar TV channel on Friday, Nasrallah cited the return of terrorists who fought in Syria back to Europe and the flow of refugees into its countries among the repercussions that have influenced the international attitude on Syria.

Solving the refugee crisis, he said, can be through either accommodating them or through accepting a political solution and stopping the war on Syria, “which is the real cure.”

Among the “most important factors” in the change on Syria and the tendency towards solving its crisis is Iran’s nuclear deal reached with the P 5+1 group, added Nasrallah.

He explained that the Americans and Europeans have reached a conclusion that they cannot bargain with Iran and break its ties to Syria.

Nasrallah went on saying that the escalation in the Russian political and military position on Syria has also pushed the Europeans and Americans to change their stance.

He noted that the failure of the US-led anti-ISIS coalition has prompted the Russians to be directly present in Syria and increase its support, adding that this Russian escalation “will definitely be influential in the course of the coming battle.”

Nasrallah stressed that the Russian and Iranian position on President Bashar al-Assad is “very firm”, noting that Iran wants Syria to remain in the Axis of the Resistance and not fall to the Takfiri organizations.

In his comments on the situation in al-Zabadani city, where Hezbollah is fighting terrorists on the Syrian army’s side, Nasrallah said the situation of the terrorists started to deteriorate less than two weeks after the battle started, and that was when they asked for help in the form of a ceasefire in al-Zabadani in exchange for stopping shelling the locals of the terrorists-besieged al-Fouaa and Kefraya towns in Idleb province.

He explained that negotiations started by the UN Special Envoy for Syria Staffan de Mistura, who asked for Tehran’s mediation, stressing that the Iranian side has played only a mediator role and does not have the decision in its hands.

He denied that Turkey is a party to the negotiations.

Going into some details of the negotiations, Nasrallah said the first stage of the agreement includes a ceasefire and the departure of the “gunmen” and their injured from al-Zabadani to Idleb in return for the departure of 10, 000 civilians, including women, young men under 18 and men above 50, from al-Fouaa and Kefraya to safe areas.

The second stage, he added, will include a 6-month truce in Bouqein, Serghaya, Madaya and al-Zabadani area in Damascus Countryside and in Kefraya, al-Fouaa, Binnish and Taftanaz in Idleb.

He pointed out that the agreement includes a commitment that a route for food and medical supplies is never blocked, noting that the implementation will be guaranteed by the UN.

Nasrallah reiterated that the Lebanese Resistance will be wherever it should be; in defense and attack.