(By Ziad Fadel, SyrPer) ~ This is one (photo above) of the three founders of the Ba’ath Party, Michel Aflaq.  Along with Salaahuddeen Al-Bitar and Zaki Al-Arsouzi, they established a Pan-Arab political party committed to fighting imperialism and uniting the Arab World.  They were secularists through and through.  Aflaq was a Syrian Orthodox Christian, Bitar was a Sunni Muslim and Arsouzi was an Alawi from the Iskanderoun region, now occupied by the Turks.  It was their legacy that kept Putin at arms length … for a while.

The Syrian conflict started in March 2011 in the southern agro-center of Der’ah.  It is now late September in 2015,  4 and 1/2 years later and the war has gone from a series of demonstrations mixed with cunningly deployed snipers, whose task it was to kill civilians while blaming it on the Assad government, to a full-fledged foreign-backed war designed to overthrow the legally elected government of Dr. Assad and supplant it with a backward (read: malleable) Wahhabist regime of obeisant monkeys and cockroaches.

That is the Neo-Con/Zionist plan hatched in the Western capitals of the so-called First World.  It has been a disaster no less agonizing than Bush’s mutton-headed decision to invade Saddam’s Iraq.

The Ba’ath is a secretive organization and political party whose roots can be traced to the Post-WWI ideologies of scientific socialism, the war against oppression and the need to survive the machinations of the unreconstructed colonialist regimes in France and England.

It was born in the cauldron of secrecy – opening up only to those who reached levels of trust established through a record of sacrifice for Arab nationalism.

It was also deeply committed to never repeating the nightmarish mandates which gave the French and English license to tyrannize the people of the Middle East.  We have an in-built, perfunctory abhorrence of foreign boots – even if their soles were attached in a friendly country.

What is ironic is that for over 4 years, the Western mainstream media kept repeating a mantra which, for a while, augured the imminent collapse of the Syrian government and the rise of “moderate” forces supported by “democracy loving” states like the USA, France, Germany, Turkey and even included the monumentally despotic regimes of Saudi Arabia and Qatar.

You remember the lines from the beginning of the crisis: “embattled”, “surrounded”, “tottering”, “ineffective”.  And even more hilarity was sprinkled on the stories with references to the “moderate”, “progressive”, “secular”,  “enlightened” opposition, terms used to describe the inept army defectors who would soon be complicit in massacring and/or expelling minorities as a contribution to the process of establishing an Islamic thingamajig with “Shari’ah Law” as its jurisprudential compass.

Much of the irony lies in the Western and Eastern support for the same group which killed over 3,000 Americans on September 11.  But, that was water under the bridge.

Just as ironically, while the Western media was slathering one layer after another of nonsense about the fall of the Assad government, Syria’s own military experts kept repeating that the war would end soon, a position which resulted in the presidendent, himself,  making predictions which would turn out to be unrealizable.

When the Russians did not deploy troops to Syria, the Western media – and even Obama’s advisors – assumed that the Russians would come around to Washington’s game and acquiesce to the ouster of Dr. Assad in exchange for a lifetime supply of SPAM and American television serials.

Ironically, during all this time, the Chief of the Russian General Staff, General Gerasimov, had in place a plan to deploy Russian troops and equipment to Syria when the time was right.

The time would be right when the blithering Syrians would ask for such assistance.  Since March 2011 until very recently, the Syrians refused to ask for such help. 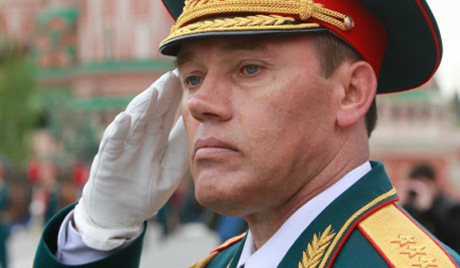 He is said to be hard-lined about everything. General Valerii Gerasimov, seen here delivering his patented scowl at a military parade.

When the Russians finally began sending a potent military force and advanced equipment to Syria, the Western Press added to its miserable record of miscalculation by attributing the assistance to the failures of the Syrian Army – conveniently forgetting that the army was generally successful in all its engagements with the terrorists and forgetting the very inconvenient fact that Dr. Assad was still in power after 4 and one-half years of their misreading the crystal ball or Ouija Board which they used to predict the outcome of his stewardship.

But, irony begets irony.  You see, it wasn’t the military situation which necessitated the Russian build-up in Syria, it was the Russian dream of having a naval base in the warm waters of the Mediterranean Sea and a forward army base in a friendly country which brought about the seeming intervention.

Ironically, the Russian deployments were not to prop up the Assad government, per se, rather, it was to secure the base once the very xenophobic Syrian Ba’ath leadership decided it wanted to end this war more quickly.

It was only then, when the Syrian government finally decided to make the move toward internationalizing its war against all of ISIS, the United States, NATO, Turkey, Saudi Arabia, Qatar, that the formal request went out to Moscow for immediate deployment of Russian troops and advisers.

In fact, here’s the most ironic twist, the Ba’ath had to accept what it was loath to for decades: a foreign presence on Arab soil for a long period of time in order to pay for the vast supplies of advanced weapons the Russians were now willing to generously give in exchange for this land grant.

The arrogance of American foreign policy is not lost on anyone.  John Kerry has readjusted his GPS and talks about “transition”.

Obama is livid with anger over the Russian deployments.  He wanted the situation to devolve into a full stalemate so that Assad could be eased out of office while ISIS controlled the area over which (or under which) the new gas pipeline from Iran would traverse.

Kerry went so far as to ludicrously posit that Russia’s propping up of Assad’s government would “prolong” the war – as though the United wanted something else besides prolonging the war.

Isn’t it ironic how Russia’s help in fighting ISIS has now become a sticking point?

And, isn’t it ironic how the Russians see their presence at Tartous and Latakia as linked to the durability and longevity of the very young president of Syria?

The sources added that investigations proved that Jannoud was kidnapped by terrorists and taken to an unknown area.

The sources held the terrorists responsible for any harm or any form of pressure that could be practiced against Jannoud who is “a patriotic figure.”

Communications with Jannoud had been lost last Wednesday at about 9:00 am and his car was found burnt later on the day near Salkhad city.

(SANA) ~ The Regional Leadership of al-Baath Arab Socialist Party condemned Saturday the abduction of secretary of the Party’s branch in Sweida Shibli Jannoud by terrorist organizations.

The leadership dismissed in a statement the act as “cowardly”, saying it reflects the culture of killing, abduction and blackmail characterizing those organizations.

Any attempt to exploit this act with the aim of affecting the unity of “our people in Jabal al-Arab and their defense of Syria” will be doomed to failure just like all other previous attempts, the leadership added in its statement.

It warned of any attempts to threaten Jannoud’s life, holding the perpetrators of the abduction responsible for any harm that could happen to Jannoud.

Sources in Sweida province told SANA on Friday that armed terrorist groups kidnapped Jannoud and took him to an unknown area, as communications with Jannoud had been lost last Wednesday at about 9:00 am and his car was found burnt later on the day near Salkhad city.

Our network (Syrianfreepress.net, WarPress.info, TG24Siria, HoyLandFree.org) and all related and associated pages on social networks, youtube, twitter, facebook…, are fighting against the media-terrorist-supporters and their fakes from the beginning of the conspiracy, starting with articles on Libya and Syria from 2011…and about Palestine from 2005…