Are you ready for a big surprise? Another Soros-connected pro-terrorist NGO in Syria has been caught red-handed faking evidence of “crimes against humanity” allegedly committed by forces who stand in opposition to the goals of the NATO/U.S. ruling elite.

OK, well, maybe it is not a big surprise. In fact, it is not a surprise at all given that, ever since the Syrian crisis began (and in the time leading up to the crisis), NGOs have been on the ground in Syria stirring up jihadist resentment against the secular government of Bashar al-Assad and fabricating “crimes” committed by that government.

The only new development here is that the NGO, Soros-connected “White Helmets,” are claiming that the Russians are the humanitarian criminals.

The White Helmets, who are decidedly pro-“opposition,” pro-terrorist, and pro-Nusra, recently released pictures on its Twitter account purporting to show the aftermath of the Russian bombing campaign against ISIS and assorted terrorists launched on September 30.

The picture showed a bleeding girl being held by a “Civil Defense” volunteer and claimed that the child was injured along with a number of other civilians.

Unfortunately for the White Helmets, Twitter users immediately exposed the photos as a fraud, since the pictures were actually taken five days prior on September 25, 2015.

Interestingly enough, the White Helmets, in an attempt to assist drumming up opposition to Vladmir Putin and Russia’s attack on jihadists, also managed to tweet about the horror of Russia’s air strikes hours before Russia’s parliament even granted Putin the authority to use the Air Force in Syria, according to Sputnik.

The Soros-sponsored “White Helmets,” one of the largest NGOs operating on the territory of Syria, is busy with cooking up lies instead of protecting the human rights of the Syrian people.

The “White Helmets,” a controversial quasi-humanitarian organization, is playing dirty in Syria: the NGO has been spotted fabricating “evidence” of Russia’s “disastrous” involvement in Syria.

White Helmets is linked to George Soros through a PR firm named Purpose Inc., a pro-war firm that argues for Western intervention against Assad. The co-founder of Purpose is Jeremy Heimans, who also helped found Avaaz, a “pro-democracy” group connected to Soros’ Open Society Foundation, SEIU, and MoveOn.org. 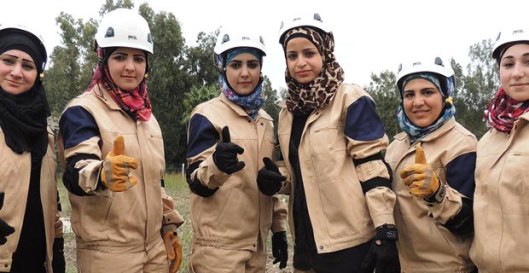 Rick Sterling of the Dissident Voice claims that White Helmets was formed by the US and UK in 2013 and was originally called Syrian Civil Defense.
(White Helmets, Avaaz, Nicholas Kristof and Syria No Fly Zone)

“Civilians from rebel controlled territory were paid to go to Turkey to receive some training in rescue operations. The program was managed by James Le Mesurier, a former British soldier and private contractor whose company is based in Dubai,” he states.

He also writes that, “The White Helmets work primarily with the rebel group Jabat al Nusra (Al Queda in Syria). Video of the recent alleged chlorine gas attacks starts with the White Helmet logo and continues with the logo of Nusra. In reality, White Helmets is a small rescue team for Nusra/Al Queda.”

Nusra, of course, not only works with ISIS but is essentially the same organization.

This is by no means the first time an NGO has faked or used fake photographs to drum up support for Western military action in Syria or to demonize the Syrian government.

On February 25, HRW posted a photo of a devastated civilian area in Syria with the tagline “Syria dropped barrel bombs despite ban.”

The “ban” HRW is referring to is the ban on bombing civilian areas that applies to both sides in Aleppo after the United Nations stepped in to save the Western-backed terrorists from annihilation. Assad’s forces had surrounded the city and had cut off a major supply route for the death squads from Turkey thus making the ultimate elimination of the jihadist forces a virtual inevitability.

RELATED: FAKES ~ ‘Human Rights Watch’ did it again, accusing President al-Assad of using “Barrel Bombs”, but with photos of damage done by Zionists in Gaza…

As Somini Sengupta wrote for the New York Times on February 24,

Human Rights Watch said Tuesday that the Syrian government had dropped so-called barrel bombs on hundreds of sites in rebel-held towns and cities in the past year, flouting a United Nations Security Council measure.

In a report released Tuesday, the group said it relied on satellite images, photos, videos and witness statements to conclude that the Syrian government had bombarded at least 450 sites in and around the southern town of Daraa and at least 1,000 sites in Aleppo in the north.

The report focused on the period since Feb. 22, 2014, when the Security Council specifically condemned the use of barrel bombs, which are large containers filled with explosives and projectiles that can indiscriminately hurt civilians and are prohibited under international law.

There was only one problem with HRW’s tweet – the photograph the organization provided was not Aleppo.

In fact, the damage that had been wrought upon the civilian area in the photograph was not committed by the Syrian military but by the United States.

The photo was actually a picture of Kobane (Ayn al-Arab), the city which has been the site of heavy US aerial bombardment over the last several months as the US engages in its program of death squad herding and geographical reformation of sovereign Syrian and Iraqi territory.

But, while HRW was content to use the destruction of the city as a reason to condemn the Assad government and continue to promote the cause for US military action in Syria, the “human rights organization” was apparently much less interested in the exact same destruction wrought by US forces.

For instance, when Western media propaganda had reached a crescendo regarding the outright lie that Assad had used chemical weapons against his own people, HRW stood right beside Barack Obama and John Kerry in their effort to prove Assad’s guilt. HRW even went so far as to repeat the lie that the UN report suggested that Assad was the offending party, driving the final nail into the coffin of any credibility HRW may have had.

When a last-minute chemical weapons deal was secured by Russia in an effort to avoid yet another US/NATO invasion of Syria, HRW did not rejoice for the opportunity of peaceful destruction of chemical weapons and a chance to avoid war, it attacked the deal by claiming that it “failed to ensure justice.” Of course, the deal did fail to ensure justice. There were no provisions demanding punishment of the death squads who actually used the weapons or the US/NATO apparatus that initiated and controlled the jihadist invasion to begin with.

Regardless, when Mother Agnes Mariam of the Cross released her report that refuted what the US/NATO was asserting in regards to chemical weapons in Syria, HRW embarked upon a campaign of attack against her and her work.

Even as far back as 2009, HRW was showing its true colors when it apparently signed off on and supported renditions – the process of kidnapping individuals off the street without any due process and “rendering” them to jails and prisons in other countries where they are often tortured – in secret talks with the Obama administration.

If HRW or White Helmets ever had any credibility in terms of the question of actual human rights, then all of that credibility has assuredly been lost. HRW, White Helmets, and other related NGOs are nothing more than pro-US, pro-NATO, and pro-terrorist organizations that act as a smokescreen for the continuation of the violation of human rights across the world – that is, unless those violations are committed by America’s enemies. In some cases, such as the White Helmets’ recent gaffe, those violations may never have actually happened in the first place.

Brandon Turbeville is an author out of Florence, South Carolina.
Please contact activistpost (at) gmail.com.

(SputnikNews) ~ One of the largest humanitarian organizations operating in war-torn Syria – the White Helmets – has been accused of being an anti-government propaganda arm that encourages direct foreign intervention.

In an article for the 21st Century Wire news service, investigative journalist and peace activist Vanesse Beeley says that the White Helmets use search and rescue activities as a cover-up to demonize Syrian President Assad and help terrorists.

The official website of the White Helmets says that its volunteers have already saved more than 20,000 people on all sides of the conflict, adding that the organization is following the principles of humanity, solidarity and impartiality outlined by the International Civil Defense Organization.

However, according to Beeley, the White Helmets and other NGO’s such as the Syrian Observatory for Human Rights, are used to justify the West’s policy of arming and supporting the insurgency in Syria.

Vanesse Beeley spoke to Sputnik tracing back to the roots of the White Helmets, “If you look at their creation in 2013, they were set up with funding from the UK, USA and Syrian Opposition Party. We immediately have the suspicion that there will be an element of impartiality within the organization.”

According to Rick Sterling’s article on the ‘Highly Effective Manipulators, he also elaborated that the “White Helmets is the newly created name for ‘Syrian Civil Defense.’

Despite the name, Syria Civil Defense was not created by Syrians nor does it serve Syria. Civilians from rebel controlled territory were paid to go to Turkey to receive some training in rescue operations. The program was managed by James Le Mesurier, a former British soldier and private contractor whose company is based in Dubai,” Global Research reported.

“The White Helmets work mainly with the rebel group Jabat al Nusra (al-Qaeda in Syria). There are videos of the recent supposed chlorine gas attack which starts with the White Helmet logo and ends with the logo of Nusra. In reality, White Helmets is a small rescue team for Nusra/al-Qaeda”, Beeley said.

During her interview with Sputnik she gave further examples of the leaked videos that show that White Helmets do more than just rescue people.

“If we at least start making people question this propaganda and if we make people appreciate that it is a very one sided story that is being portrayed to them, then we are breaking some strangle holds of these narratives,” Beeley told Sputnik.

4 thoughts on “Tracking Terrorists ~ Soros and His Evil Creatures, Syrian Civil Defense and the White Helmets, Fake Humanitarian Aid, Real CIA Tools ~ [RELATED: Tracing Back to the Roots of the White Helmets]”