EDITORIAL STATEMENT: October (2011), marks the four-year anniversary of the disappearance of Libya’s leader, Muammar Gaddafi, and the decline into chaos of one of Africa’s greatest nations.
The position of this network is (and always was) that brother Colonel Muammar Gaddafi, born the 7 June 1942, never physically died: he is alive, he will live forever in the hearts of millions of people in Libya, in Africa and in the whole world, and will remain forever the worst nightmare for Libya’s enemies, that one after the other will be overwhelmed by their evil actions, and by themselves and between themselves each other they will be eliminated and eternally damned.
(the editorial team)

The sheer euphoria of the entire British press over President Muammar Gaddafi’s savage assassination by NATO’s mercenaries on the 8th month of the genocidal invasion of Libya betrayed an absolute moral bankruptcy of the predatory imperialist alliance of NATO countries, Arab monarchies and Israel. 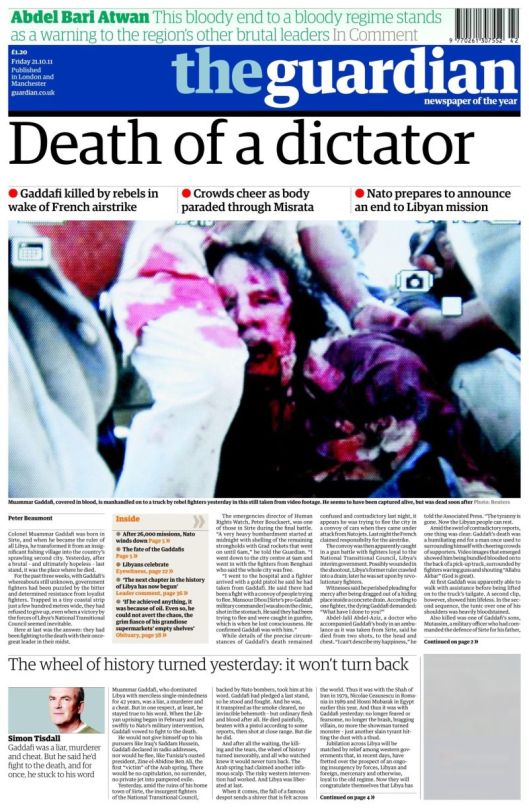 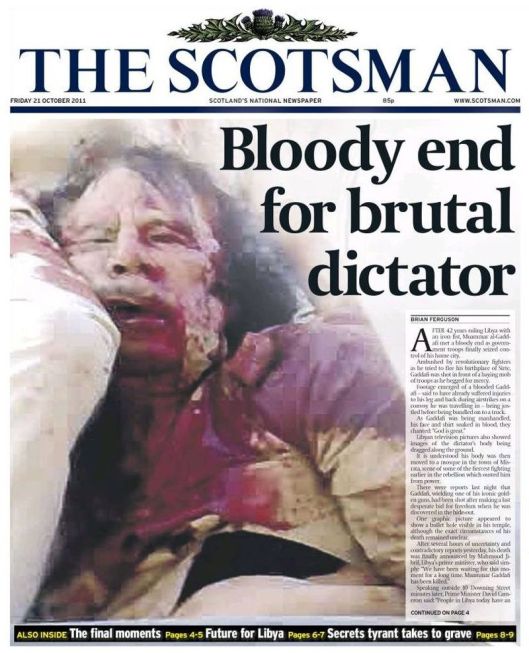 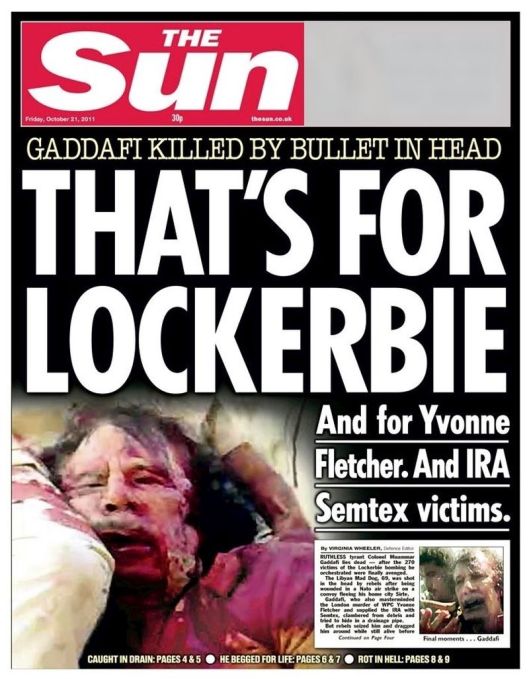 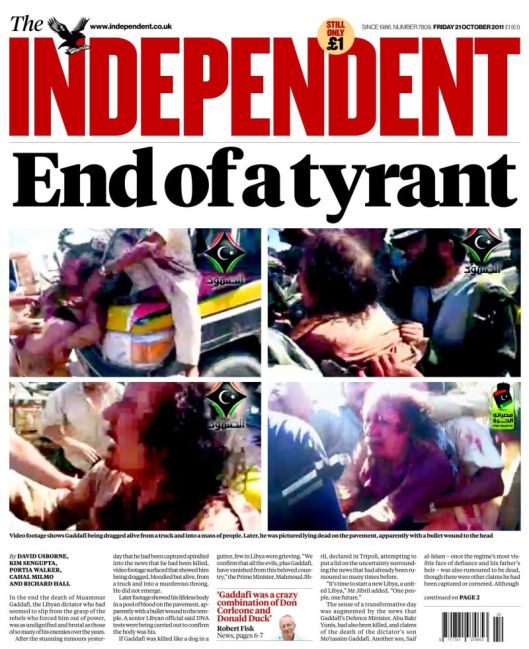 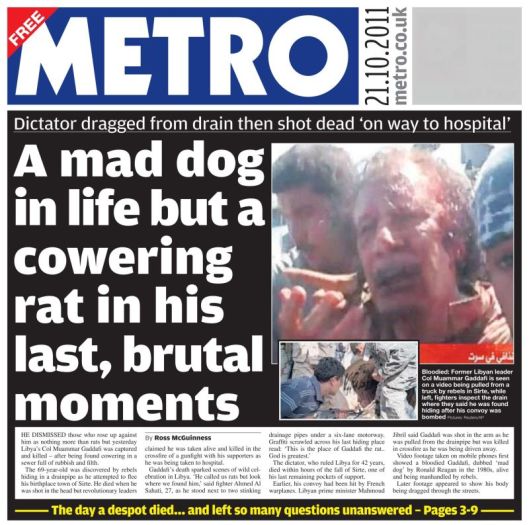 “Today, the government of Libya announced the death of Muammar Qaddafi. […]  Today, we can definitively say that the Qaddafi regime has come to an end. […]  So this is a momentous day in the history of Libya. […]

Our brave pilots have flown in Libya’s skies, our sailors have provided support off Libya’s shores, and our leadership at NATO has helped guide our coalition. Without putting a single U.S. service member on the ground, we achieved our objectives, and our NATO mission will soon come to an end.

This comes at a time when we see the strength of American leadership across the world. We’ve taken out al Qaeda leaders, and we’ve put them on the path to defeat. We’re winding down the war in Iraq and have begun a transition in Afghanistan. And now, working in Libya with friends and allies, we’ve demonstrated what collective action can achieve in the 21st century”.

source:  Remarks by the President on the Death of Muammar Qaddafi, The White House (offical website of the U.S. government), 20 October 2011

“I will fight to the death’ says Bashar Assad. (*)  For God’s sake, against whom are you fighting? Fighting to the death against your own people is not heroism but cowardice.

If you want to see someone who has fought to the death against his own people, just look at the Nazi Germany, at Hitler, at Mussolini, at Romania’s Ceausescu.

If you can’t draw any lesson from [the fates of] these [leaders], then look at Libya’s leader who has been pointing gun at his own people, who has been making exactly the same remarks as you are making and who [ended up getting] killed, in a way none of us would desire, only 32 days ago.

Bashar Assad, if you are talking about fighting to the death against a [foreign] intervention on your territory, then this begs the question as to why you haven’t fought to the death for [recapturing] the Israeli-occupied Golan Heights? Why didn’t you show your bravery there, why can’t you show it?”

(*)  editorial note:  Mr Erdogan is referring to a recent interview of Syria’s President Bashar Assad with The Sunday Times. Instead of providing a proper transcript of this interview, The Sunday Times presented it as a news report. Here is the relevant section:

[Assad] was more preoccupied with the question of whether Arab leaders sympathetic to the West were preparing the way for international intervention, as they had in Libya. Turkey was reported to be considering proposals for a no-fly zone and a buffer area on the Syrian side of their shared border to protect civilians from bombing. Suspicion is mounting that some form of military action against Syria may follow. If so, would he fight and die, I asked. “Definitely, this goes without saying and is an absolute.” [Assad replied].

source:  Strike Syria and the world will shake, by Hala Jaber, The Sunday Times via presidentassad.net, 20 November 2011

Note: This front page was published on the third day of the NATO-led invasion of Libya.

The Cult of Killing and the Symbolic Order of Western Barbarism: How the Media Worships Violence and “Ritualized Atrocities” – The Lynching of Mouamar Gaddafi
by Jean-Claude Paye and Tülay Umay, Global Research, 13 April 2013 (originally published in French on November 18, 2011)

“End of a tyrant”: The Independent and The Guardian jubilant over the assassination of Libya’s deposed President Gaddafi
compiled by Cem Ertür, Indybay, 21 October 2011