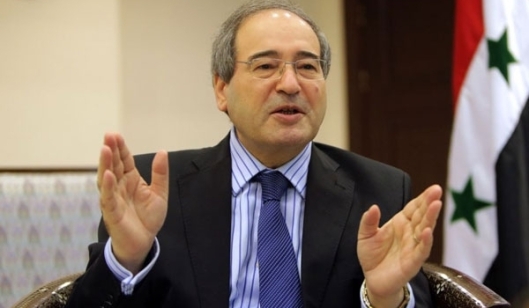 Meqdad’s remarks came after the western media reports said earlier today that the representatives of the Syrian government and the opposition groups will meet in Moscow next week to discuss the transitional period in Syria.

“There is no talk about a transitional period in Syria and those who talk about this issue are unaware of Syria’s realities”, Meqdad told reporters after meeting with his Iranian counterpart Hossein Amir Abdollahian in Tehran on Tuesday.

The senior diplomat said that the Damascus government would only accept to discuss national dialogue, a broad-based government and the constitutional process in Syria

He reiterated that no official report has been received yet about a possible meeting between the Syrian government and opposition groups.

(PressTV, 3/11/2015) ~ Syrian Deputy Foreign Minister Faisal Mekdad has expressed his country’s opposition to the idea of a “transitional period” in Syria.

Mekdad was quoted by the Beirut-based Al-Mayadeen TV as speaking in a meeting with Iran’s Deputy Foreign Minister for Arab and African Affairs Hossein Amir-Abdollahian in Tehran on Tuesday.

He said the Syrian government opposes a political transition sought by Western countries to end the four-year conflict in his country.

“We are talking about a national dialog in Syria and a broad-based government as well as a constitutional process. There is no [talk of a] transitional period in Syria,” the Syrian official said.

He added that no official report has been received yet about a possible meeting between the Syrian government and opposition groups.

During their meeting which lasted six hours, the two officials exchanged views about political settlement of the Syria crisis.

Amir-Abdollahian and his Syrian counterpart underscored the necessity of serious fight on terrorism.

They also reviewed the outcome of the recent Vienna talks with focus on respecting people’s choice and the role of President Assad.

Also on October 30, top diplomats from 17 countries, including Iran, as well as envoys from the United Nations and the European Union, also gathered in Vienna for talks over the Syrian conflict. It was the first time that the Islamic Republic attended such negotiations on Syria.

The participants agreed on respecting Syria’s unity and sovereignty as well as eradicating extremist groups operating in the Arab country. However, they remained at loggerheads over the role President Bashar al-Assad would play in Syria’s political process.

(MiddleEastEye, 3/11/2015) ~  Syria’s deputy foreign minister says ‘Assad is the legitimate president elected by the Syrian people, and the world must respect that will’.

A “transition period” in Syria is out of the question because President Bashar al-Assad is the legitimate leader, the country’s deputy foreign minister said on Tuesday.

“There is no transition period. There exist official institutions that are functioning”, Faisal Moqdad said on a visit to Tehran, Syria’s state news agency SANA reported.

“We are talking about a national dialogue, an enlarged government and a constitutional process, not a transitional period,” he added.

“President Bashar al-Assad is the legitimate president elected by the Syrian people, and the world must respect that will,” Moqdad said on Tuesday.

Moqdad’s comments come after a round of international talks in Vienna last week to discuss a potential end to Syria’s four-year conflict.

Neither Syria’s government nor opposition were represented, but countries backing government and rebel sides were present.

A transitional government has long been discussed as part of a peace process to end Syria’s conflict, from as early as 2012, when world powers met in Geneva to discuss the war.

The fate of Assad has been a persistent sticking point in discussions on ending the conflict, however, with Assad’s backers insisting he will not be forced from power.

On Tuesday, the Russian foreign ministry’s spokeswoman Maria Zakharova said that Moscow is “not saying that Assad should leave or stay” but rather it is up to the Syrian people to decide.

She denied that Russia is insisting on keeping Assad at the helm of power in Syria.

Russia began carrying out air strikes against opposition groups in Syria at the end of September 2015, bolstering the Syrian army’s efforts and morale after a series of defeats to both opposition forces and the Islamic State group.

Syria’s opposition and its backers, however, insist Assad can have no role in the country’s future.