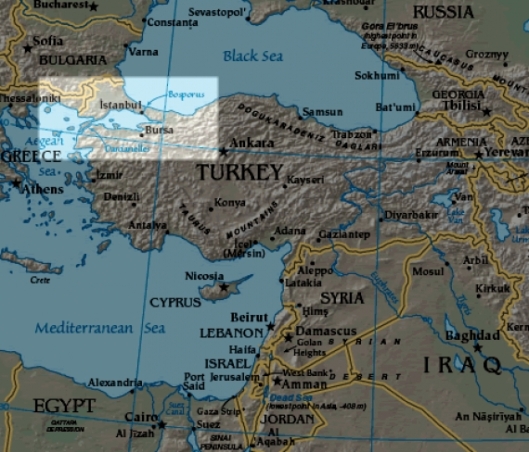 By Superstation95 ~ Republished by Globalresearch

A recent report by Sputnik states that in this regard:

“In times of war, the passage of warships shall be left entirely to the discretion of the Turkish government, according to the document.

From a legal perspective, Turkey has no legal grounds to create obstacles for Russian vessels carrying cargo, including military cargo, Russian lawyer Vladimir Morkovkin told RBK. Turkey can ban non-friendly vessels from navigating through the Straits only if at war, the expert explained.

After World War II, Ankara made several efforts to gradually strengthen its control over the Straits. In 1982, Turkey tried to unilaterally expand the regime of the Istanbul port over the entire area of the Straits. The decision was harshly criticized by neighboring countries, and Turkey stepped back”.

We are at very dangerous crossroads. Russia’s maritime access to the Mediterranean is largely controlled by NATO countries and their allies (i.e. 1. Bosphorus and Dardanelles; 2. Suez canal, 3. Strait of Gibraltar) 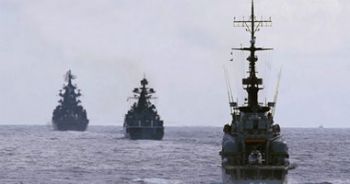 Turkey has begun a de facto blockade of Russian naval vessels,  preventing transit through the Dardanelles and the Strait of Bosporus, between the Black Sea and Mediterranean.

According to the AIS tracking system for the movement of maritime vessels, only Turkish vessels are moving along the Bosphorus, and in the Dardanelles there is no movement of any shipping at all. 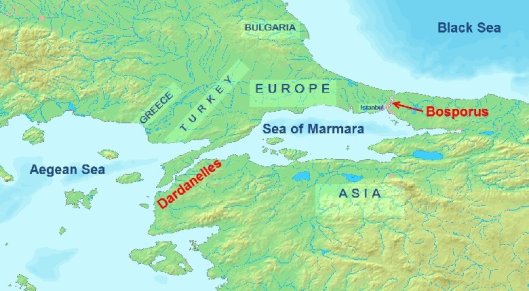 At the same time, both from the Black Sea, and from the Mediterranean Sea, there is a small cluster of ships under the Russian flag, just sitting and waiting. The image below shows the situation with the ships using the GPS transponder onboard each vessel: 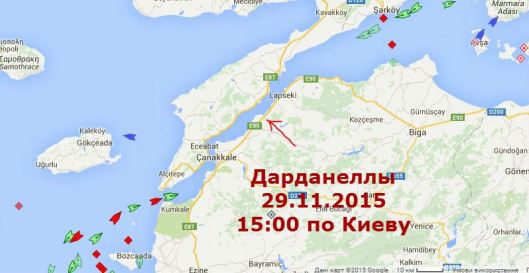 In addition, shipping inside the Black Sea from Novorossiisk and Sevastopol in the direction of the Bosphorus, no Russian vessels are moving. This indirectly confirms the a CNN statement that Turkey may have blocked the movement of Russian ships on the Dardanelles and the Strait of Bosporus.

There is a Treaty specifically covering the use of these waterways by nations of the world.  That Treaty is the Montreux Convention Regarding the Regime of the Straits.

It is a 1936 agreement that gives Turkey control over the Bosporus Straits and the Dardanelles and regulates the transit of naval warships. The Convention gives Turkey full control over the Straits and guarantees the free passage of civilian vessels in peacetime. It restricts the passage of naval ships not belonging to Black Sea states. The terms of the convention have been the source of controversy over the years, most notably concerning the Soviet Union‘s military access to the Mediterranean Sea.

Signed on 20 July 1936 at the Montreux Palace in Switzerland, it permitted Turkey to remilitarise the Straits. It went into effect on 9 November 1936 and was registered in League of Nations Treaty Series on 11 December 1936. It is still in force today, with some amendments.

The International Straits Commission was abolished, authorizing the full resumption of Turkish military control over the Straits and the refortification of the Dardanelles. Turkey was authorized to close the Straits to all foreign warships in wartime or when it was threatened by aggression; additionally, it was authorized to refuse transit from merchant ships belonging to countries at war with Turkey.

Turkey has now invoked its power, but has not publicly stated whether they are blocking Russian Naval Vessels because Turkey is “threatened with aggression” or whether Turkey considers itself to be “at war.”  Last week, Turkey shot down a Russian military jet over Syria and this has caused a major rift between the two nations.

This latest development of blockading Russian naval vessels is a massive and terrifyingly dangerous development.  Blockading Russia and preventing its Black Sea fleet from traveling to the rest of the world, or back to its home port,  is something that will not sit well with the Russians.

It is important to note two things:

1) Turkey is a member of the North Atlantic Treaty Organization (NATO) as is the United States and most of Europe, AND;

2) Turkey took the first shot at Russia when they intentionally shot down a Russian jet last week.

It is important to remember these facts because, as a NATO member, Turkey can invoke Article 5 of the NATO Treaty which requires all NATO members to come to its defense if Turkey is “attacked.”  So if Russia decides to fight back against Turkey downing its military jet, the Turks might call NATO and claim they’ve been “attacked” thereby calling-up NATO forces to go to war against Russia.

It bears remembering, however, that Turkey shot first.  Turkey was the nation which “attacked.”

Before NATO and the world get dragged into a war between Russia and Turkey, the citizens of the world must be ready to remind our leaders that Turkey Shot First.

Why did the Turks shoot?  Because Turkey has been allowing the terrorist group ISIS to sell the oil it has stolen from countries it is conquering.  The oil is transported from the wells in countries where ISIS has seized power, is taken by truck to Turkey, and is then sold at cheap prices on the black market.

This black market selling results in over 1 Million dollars per DAY flowing into ISIS to keep it equipped and supplied for its ongoing terrorist activities.  Only a fool would think that all this is going on through Turkey, without some Turkish officials having their hands out for money from the illegal oil sales.  Put simply, Turkey appears to be in business with ISIS and Russia is harming that by attacking ISIS in Syria.

So Turkey shot down one of the Russian planes that was attacking ISIS.  Russia is quite furious; with the Russian President stating the shoot down was “a stab in the back of Russia” and was carried out by “accomplices to terrorism.”

It would be shocking if NATO were to defend Turkey under such circumstances because by its actions, Turkey is providing material support to the terrorist group ISIS.  For NATO to defend that would make all of us accomplices to terrorism.

Readers can view REAL TIME SHIP INFO at the AIS Maritime web site, to see for yourselves that Russian ships are being held from transit.  The web site address is:  http://www.marinetraffic.com/en/ais/home/centerx:27/centery:40/zoom:9