WARNING :
YOU MAY FIND SOME PHOTOS DISTURBING 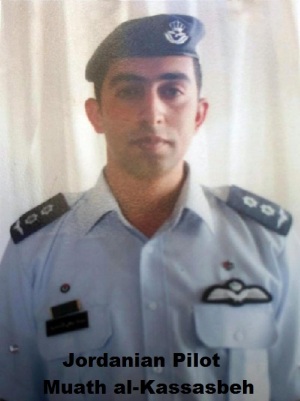 Nearly one year ago… Christmas Eve, 2014, near Raqqa Syria, a Jordanian pilot used his parachute to what he thought was safety, landing in a river.

He was captured by what many called ISIS militants, and burned alive a month or month and a half later. I beg to differ on who captured the pilot and subsequently burned him alive To stir the ANTI-“ISIS” pot.

Something about the original stories surrounding this death didn’t settle well with me. The reason being that our news source, The Real SyrianFreePress, along with many videos (many I have made myself), clearly show the Free Syrian Army committing so many crimes against humanity, that Ive lost count. But lets just say at LEAST hundreds. I have proven time and time again that many “FSA” or Jabhat al Nusra are also “ISIS” using photos, and screen shots you cannot deny. We have shown them together eating, meeting, greeting, helping, aiding, etc. So, I set out to do an investigation on who, I believe, was behind the burning of the the Jordanian pilot Muath al-Kassasbeh and why, in hopes to at least set the record straight with the world, especially his family, and the people of Jordan who deserve the truth.

First, I found it very odd that only 3 photos were released anywhere on the actual capture and transfer of al-Kassasbeh. 2 of these photos are here…

And the 3rd here…

I knew there were reasons for covering the faces of those involved, because people like me, have identified militant faces for nearly 5 years now and would know the true identities of those involved. I had to go with what I had. The first 2 original photos. I set out to do just that. I knew the Free Syrian Army would be involved because they are involved in every horrific crime done in Syria, in one way or another being that “ISIS” and Jabhat al Nusra and “FSA” are interchangeable players in the bigger game of Daesh. 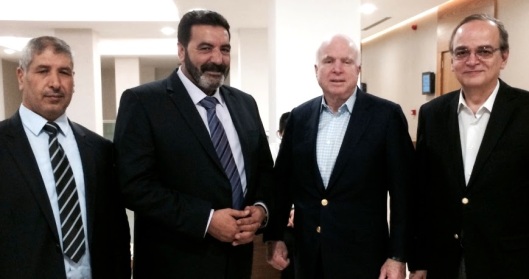 I kept going back to Haitham (or Haythem) Afisi after seeing him pictured with US senator John McCain. Usually, when any questionable behavior is carried out in a foreign country that the US wants to control, senator McCain is somehow involved. After all, his claim that heart eaters are “really good people” has knowledge of what their doing written all over it.

I saw this report about Afisi REFUSING to fight the Islamic State because he wanted Assad out first. Hmmm, something was wrong with this statement. The “moderate” terrorists arent really fighting with ISIS as they claim, or they would want them gone just the same. But then, again, we have shown them working together for years now. 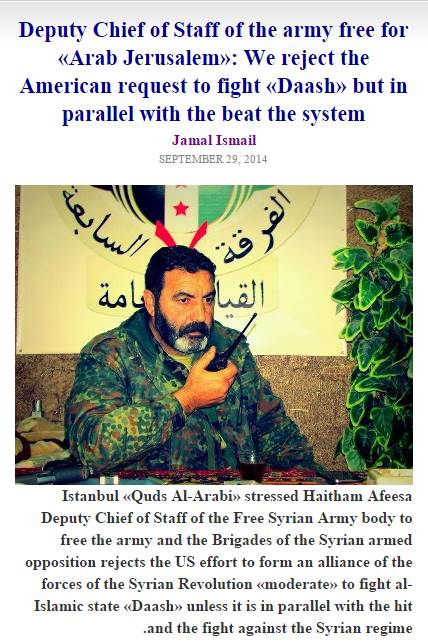 I was thinking how similar Afisi’s face was to the militants who captured the pilot. Especially given of how the beard greys with age. I kept searching for the link between the two, knowing there was one. Then I found the man in the photo with the captured pilot… Sitting right next to the Commander of the 7th division of the Syrian Revolutionary Front… Haithem (Haythem) Afisi. He looks enough like him to be his brother, and I would guess he is considering their beards even grey the same.

I enlarged the images of the just the heads so you can see the conclusion I drew, and why I am convinced they are the same man.

A map, supplied by the ISW (institute for the Study of War) one month prior to the capture of al-Kassasbeh dated November 20, 2014 shows Raqqa was not only under the control of ISIS, but also was an ISIS Support Zone. If the man photographed with the captured pilot is the man I claim he is in this photo, the the Syrian Revolutionary Front is just another name for ISIS, still, an enemy of Syria. If the “moderate rebels” are working in support of ISIS, that makes them one in the same, an enemy of Syria.

I believe one of the men with him, with his face covered is Mohammed Abu Omar (according to his facebook page). Click on image to enlarge it, and pay careful attention to his nose.

This picture was taken from a larger one showing these supposed “ISIS” or Jabhat al Nusra members, but I included many of their “FSA” faces to show they arent always ISIS, but they are always Daesh.

As you can see, some of these men are actually pictured here with Afisi also. 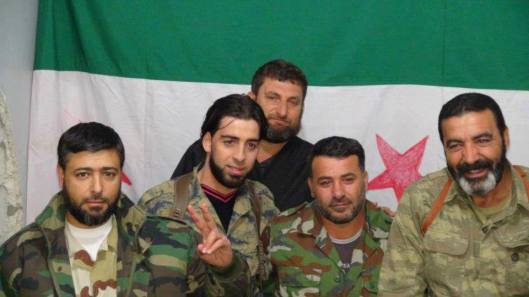 And I believe the other main face shown in the original captured photos may be that of this man… Another “moderate” terrorist.

For those of you who still believe there is this huge difference between “ISIS,” Jabhat al Nusra and the “FSA,” I urge you to read our posts exposing terrorists, and watch our youtube videos. We have exposed many wearing uniforms of both ISIS and FSA. And take a look at photos such as these showing FSA wearing ISIS or Jabhat al Nusra at the same time. 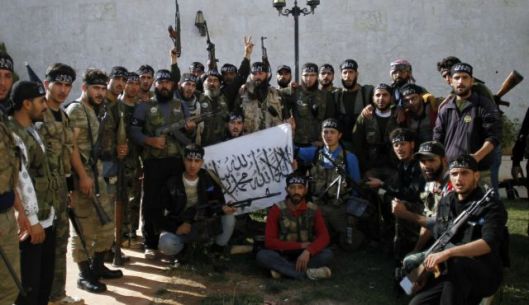 To the family and friends of the the Jordanian pilot Muath al-Kassasbeh, I hope this put to rest a difference between the terrorists the west supports and gulf states support. None should have any support. None are “moderate.” None are Muslims, and none deserve the term Islamic State anything. None know the Quran and if they do, they sure dont follow it. They are all highly paid filthy dirtbags who kill many innocent people. They are paid private militias, nothing more, and nothing less. They are about as Islamic as Netanyahu is, but if he keeps supporting them, we’ll see how they will actually shake up and reshape Israel if they arent controlled. If I was you Jordan, I would support the Syrian president, and run every one of these fakes from your country. Your own future could be at stake.

ALL ARE ENEMIES OF SYRIA!

The Muslim Brotherhood can pretend to be Muslim, but they arent a true Muslim. They can pretend to be “friends” with Israel, or anyone for that matter until their dagger is plunged into your back. Israel and Jordan would do good to support Russia, Iran and Hezbollah in their efforts to rid Syria of this cancer before it spreads to its neighbors, and without a doubt, it will! Its no wonder why Hafez al-Assad, the former president of Syria, and the current president of Egypt, Abdel Fattah el-Sissi have outlawed the terrorists organization known as the Muslim Brotherhood. If these fakes want to live under strict Sharia so bad, why dont they move to Saudi… The kings of Be-heading!

The biggest kafir is the one backbiting against another to kill the innocent.