Here’s a video of the deployment shared on social media:

Contrary to what you might have read, there’s really nothing unusual about that.

As you may recall, Turkey’s military entered Iraq back in September in hot pursuit of PKK “terrorists” Ankara claimed had fled over the border. And that was just par for the proverbial course.  Here’s what we said at the time:

In early 2008, Turkish soldiers entered Iraq in a similar effort to eradicate the PKK. “Operation Sun”, as the incursion was called, was conducted with Washington’s blessing for the most part. “Washington described the PKK as a ‘common enemy’, and only urged Ankara to keep its incursion short and closely focused,” BBC noted at the time, adding that “the positions of the UN and EU have been similar, suggesting a degree of sympathy with Turkey’s cause.”

You get the idea.

So while history doesn’t repeat itself, it damn sure rhymes and here we are again watching as the Turkish military crosses the Iraqi border as though it’s not even there chasing “terrorists” up into the mountains.

What’s different this time around, is that this isn’t a Kurd-chasing mission.

In fact, if you believe the official line, it’s the exact opposite. Turkey has apparently had some 90 troops on the ground in Bashiqa “for two years” on a mission to “train” the Peshmerga. The new troops – around 150 personnel supported by two dozen tanks- will “take over the mission,” according to Hurriyet.

“Turkey will have a permanent military base in the Bashiqa region of Mosul as the Turkish forces in the region training the Peshmerga forces have been reinforced,” the daily continues, adding that “the deal regarding the base was signed between Kurdistan Regional Government (KRG) President Massoud Barzani and Turkish Foreign Minister Feridun Sinirlioglu, during the latter’s visit to northern Iraq on Nov. 4.”

Ok, so what’s important to remember here is that although Erdogan is no “fan-o’-Kurds”, Ankara is friendly with the KRG and indeed, Barzani’s 632,000 b/d oil operation (which, you’re reminded, runs independent of SOMO, much to Baghdad’s chagrin) depends heavily on a pipeline that runs from Iraq to Ceyhan. Over the summer, the PKK attacked the pipeline costing the KRG some $250 million in lost revenue.

As Rudaw noted at the time, that amounts to an entire month’s worth of salaries for the Peshmerga and other security forces, underscoring the extent to which oil sales via Turkey are crucial to the government in Erbil. 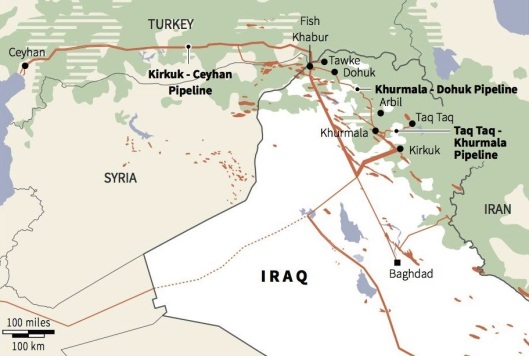 You might also remember from “ISIS Oil Trade Full Frontal: “Raqqa’s Rockefellers”, Bilal Erdogan, KRG Crude, And The Israel Connection,” that there seems to be some commingling going on when it comes to Turkish and ISIS crude. Technically, both are “illegal” and because the 45,000 or so barrels per day that ISIS pumps are so inconsequential in the large scheme of things, it’s easy for Islamic State crude to get “lost” in the shuffle once it gets to Turkey which works out great for those involved in the smuggling operation (as an aside, Russia has identified what Moscow says are other ISIS oil smuggling routes but we’ll focus on northern Iraq for now).

You might notice that there’s a certian irony to this whole thing as it relates to the KRG. What the Al-Araby al-Jadeed report (cited in the article linked above) suggests is that the Kurds in Iraq are to some extent complicit in the entire operation which is amusing because it’s the sale of undocumented Kurdish crude that allegedly funds the Peshmerga’s fight against Islamic State. As with every other dynamic in the region, the entire thing is impossibly convoluted.

With that in mind, consider where these Turkish troops (who, again, are supposed to be “training” the Peshmerga) are located.

So they’re right next to Mosul and right between the Kurds and ISIS and, most importantly of all, right on what Al-Araby al-Jadeed claims is the smuggling route for illegal ISIS crude into Turkey from Iraq.

The star on the map is Zakho. Araby al-Jadeed, citing an unnamed Kurdish security officials, employees at the Ibrahim Khalil border crossing between Turkey and Iraqi Kurdistan, and an official at one of three oil companies that deal in IS-smuggled oil, says that once Islamic State oil “is extracted and loaded, the oil tankers leave Nineveh province and head north to the city of Zakho, 88km north of Mosul [and] after IS oil lorries arrive in Zakho – normally 70 to 100 of them at a time – they are met by oil smuggling mafias, a mix of Syrian and Iraqi Kurds, in addition to some Turks and Iranians.” 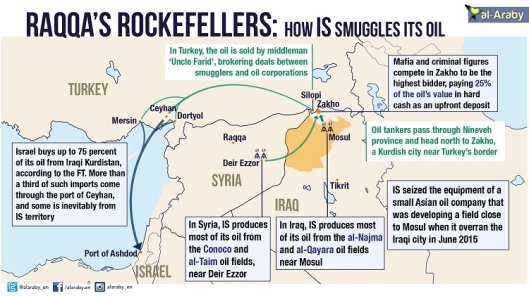 Araby al-Jadeed’s story takes a turn for the fantastic after that, but the point is that it seems extraordinarily convenient that just as Russia is making an all-out effort to expose Turkey’s role in financing Islamic State’s lucrative oil operation and also to destroy ISIS oil convoys in Syria, that Ankara would dispatch troops and two dozen tanks to the exact place in Iraq where some reports suggest the heart of ISIS’ Iraqi oil operation lies.

For his part, Iraqi PM Haider al-Abadi has called for Turkey to “immediately” withdraw its troops. He also calls Ankara’s incursion a “violation of sovereignty.” Here’s the full statement:

It has been confirmed to us that Turkish troops numbering around one regiment armoured with tanks and artillery entered the Iraqi territory, and specifically the province of Nineveh claim that they are training Iraqi groups without the request or authorization from the Iraqi federal authorities and this is considered a serious breach of Iraqi sovereignty and does not conform with the good neighbourly relations between Iraq and Turkey.

The Iraqi authorities call on Turkey to respect good neighbourly relations and to withdraw immediately from the Iraqi territory.

That would seem to indicate that Baghdad has never approved the “training mission” that Ankara claims has been going on east of Mosul for two years.

Furthermore, this underscores the fact that Iraq does not want help from NATO when it comes to fighting ISIS. As we reported last week, Iraqis generally believe the US is in bed with Islamic State and you can bet that Russia and Iran will be keen on advising Baghdad to be exceptionally assertive when it comes to expelling a highly suspicious Turkish presence near Najma.

Ultimately, this is yet another escalation from Erdogan and the timing, location, and vague explanation raise all sorts of questions about what exactly those 150 troops and 25 tanks are doing but you can be sure that if Baghdad rebukes Washington and green lights Russian recon and airstrikes in Iraq, we’ll find out soon enough.

Are These The Tankers Bilal Erdogan

“All of the oil was delivered to a company that belongs to the son of Recep [Tayyip] Erdogan. This is why Turkey became anxious when Russia began delivering airstrikes against the IS infrastructure and destroyed more than 500 trucks with oil already. This really got on Erdogan and his company’s nerves. They’re importing not only oil, but wheat and historic artefacts as well.”

Here’s a list of ships that Turkish or other regional media have at one time or another confirmed belong to Bilal:

You can track them all, free of charge at MarineTraffic.com:

… … … you can read the full report at:
http://www.zerohedge.com/news/2015-11-30/are-these-tankers-bilal-erdogan-uses-transport-isis-oil