(FNA) ~ Sources disclosed on Saturday that the operation for hunting Jeish al-Islam commander Zahran Allouch was the result of an inside job.

On Friday, the notorious commander of Jeish al-Islam, Zahran Allouch, was confirmed dead after the Syrian fighter jets conducted a powerful airstrike in Eastern Ghouta in Damascus countryside, killing the notorious terrorist leader and several other militant commanders in the attack. 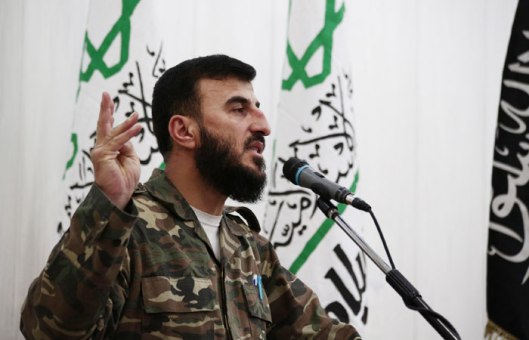 “The Syrian Air Force Intelligence was behind the attack which killed Zahran Allouch and several of his deputies,” the sources said.

“One of the intelligence officers that infiltrated Allouch’s network had revealed to the air force the precise location of the militant commanders’ meeting that took place in Eastern Ghouta, and this ultimately led to the death of Zahran Allouch and his comrades,” the sources said.

“This is not the first time that the Syrian Air Force Intelligence Unit has carried out a spying operation; however, this is by far one of their largest operations during this war,” the sources said.

Army Spokesman Ali Mayhoub confirmed on Saturday that Allouch and a number of other commanders of Jeish al-Islam and other terrorist groups, including Al-Rahman and Ahrar al-Sham, were killed in a special operation conducted by the Syrian air force on terrorists’ military positions in Eastern Ghouta.

Allouch was killed when the Syrian fighter jets fired eight rockets at the terrorist group’s command center in Al-Marj region of Eastern Ghouta, he said.

Senior members of Ahrar Sham’s Shura (consultative) Council sent their condolences on the death of Allouch, who was known as the most formidable sworn enemy of President Assad across Southern Syria, as his elimination strikes a lethal blow at Jeish al-Islam and other militant groups in Syria.

Allouch was notorious for his vast ethnic cleansing of Shiites in Syria.

Jeish al-Islam is one of the largest terrorist groups in Southern Syria and the biggest one in Eastern Ghouta.

Jeish al-Islam is a Saudi-backed Takfiri terrorist group affiliated to the Islamic Front a conglomerate of tens of terrorist groups fighting against the Syrian government.

~ A Christmas gift to the entire world ~
CONFIRMED: the mercenary Zahran Alloush, leader of the ‘Islam Army’ terrorist gang, killed with a large number of other terrorist leaders by Syrian Air Forces and Syrian Army Units ~ [Reports and Video] ~

Already seriously wounded (declared and given up for dead in an earlier bombing of Russian aviation), Saudi mercenary and CIA dummy-terrorist Zahran Alloush has been now definitively killed by the Syrian armed forces.

Sources said that Alloush was killed by an airstrike which targeted a hideout for terrorists were a meeting for leaders of terrorist organizations was being held in the depths of the Eastern Ghouta.

The airstrike resulted in destroying the hideout completely along with those inside it, who included leaders of the terrorist organizations Islam Army, “al-Rahman Legion,” and “Ahrar al-Cham Islamic Movement,” the sources stated.