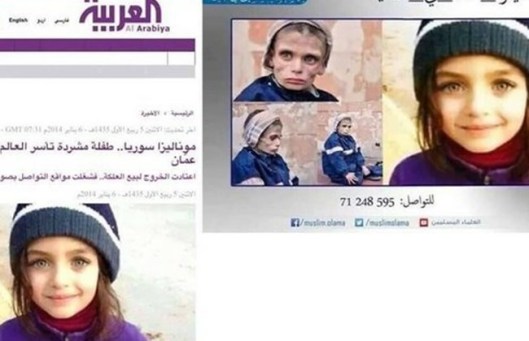 Neither of these images are from Madaya

Another example: A photograph of a malnourished girl claimed to be taken recently in Madaya was actually a photograph of a young Lebanese girl taken 3 years ago. She is now well and developing normally. The photograph has been abused on several occassions by ‘human rights’ groups with an agenda to push.
(Submitted by Yonatan)

The family of a south Lebanon girl depicted in a photo that went viral alleging to show a starving child from a besieged Syrian border town has expressed anger over the incident.

“They took it too far this time,” Rosine Mazeh, the grandmother of 7-year-old Marianna Mazeh, told Al-Jadeed from their village of Tay Filsey in a report broadcast Saturday.

She said the photo of her smiling brown-haired, blue-eyed granddaughter was originally posted to Facebook three years ago and had been doctored several times in the past by individuals promoting different causes.

Most recently, the photo was circulated in a side-by-side with images depicting a skeletal figure said to be suffering from malnutrition as a result of a Syrian army siege in the town of Madaya, located several kilometers east of Lebanon’s border.

Several other photos circulating on social media and picked up by some international news agencies that alleged to show starvation from the town have also been revealed as fakes.

Next time try congressional testimony from a teary-eyed daughter of the Kuwaiti Ambassador? It has a 100% success rate with justifying bogus wars of aggression.

The Syrian starving little “Mona Lisa” turns out to be Lebanese

(Damascus, 10/1/2016, by H. Said, SANA) – “Syria’s Mona Lisa”, this is the name some media gave to the “emaciated”, “starving” and “homeless” girl of the “besieged” Madaya city, adding a further lie to their record of falsification and disinformation.

In their search for a hero for their new misleading campaign -this time about Madaya city-the Saudi al-Arabiya and the Qatari al-Jazeera TV channels had only to go back to their photo archive, pick a photo of a beautiful little girl and pose her as a victim of what they call “a siege of the city”.

There are of course many other “homeless” and “starving” heroes and heroines in the Syria stories of these two channels and other Arab and foreign terrorism-advocating media outlets, who come to be of various non-Syrian nationalities and whose pictures have been collected from different places of the world.

All of a sudden, pictures of “Syria’s Mona Lisa”, who is actually a Lebanese national and whose name is “Maryana Youssef Mazeh”, went crazy viral on the internet, being used to elicit condemnation of the alleged siege of Madaya, located to the northwest of Damascus.

Surprised and shocked by what happened, Maryana’s family expressed their rage and annoyance to the various Lebanese media outlets that visited them at their home in Teir Falsiyeh town in southern Lebanon where Maryana lives.

It was however not their first experience with this sort of falsification, nor was it Maryana’s.

The same trick was used in 2013 when al-Arabiya channel and other websites presented the 7-year-old girl as a Syrian homeless pretty little girl selling chewing gum in the Jordanian al-Zaatari Camp for displaced Syrians.

What really happened back then, the uncle explained, was that on her way back from a nearby shop after buying a gum pack, Maryana posed to her family who took pictures of her and later posted them on Facebook.

Mazeh told the Lebanese TV channels that the family were disturbed and informed those websites that the context of the photo had nothing to do with what it was meant to look like by al-Arabiya.

He went on saying that now, two years from that incident, the family were surprised to see the picture used once again, but this time intended to show Maryana as a girl purportedly from Madaya, attached to a photo of a supposed skinny replica of Maryana after the siege.

“We once again stress that this is not the case,” Maryana’s uncle was quoted as saying. 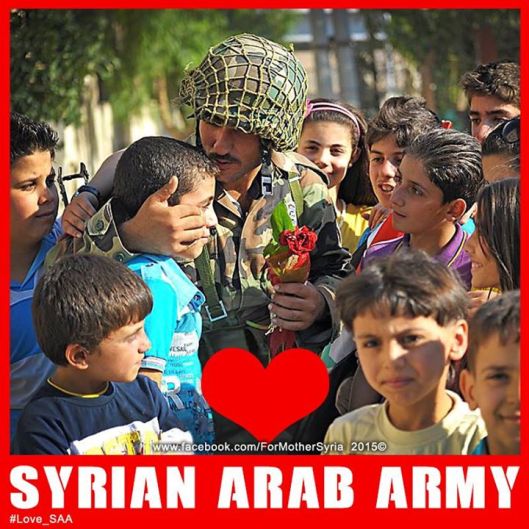