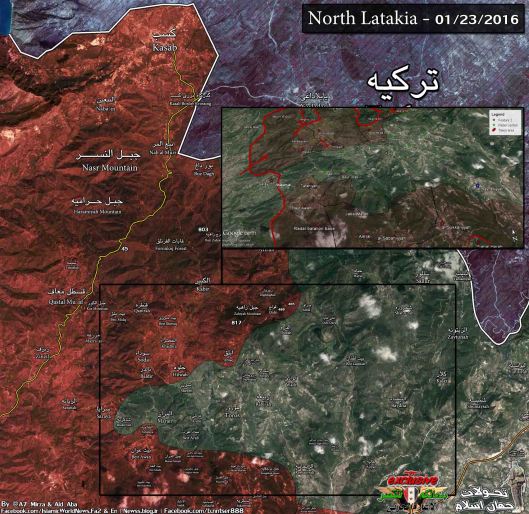 23/1/2016 ~ The Syrian army and armed forces, targeted on Saturday different sites and positions of terrorist organizations in several provinces of the country, killing scores of them and destroying their vehicles.

A military source told SANA that Army and Armed Forces units, in cooperation with popular defense groups, established control over the villages of al-Tefahiya, Hilwa al-Gharbiya, Hilwa al-Sharqiya, al-Amlik, Beit Arab, Beit Ablaq, and Tal Asholan along with all the hills surrounding them in Lattakia’s northern countryside.

A military source told SANA that the army units and defense groups killed and injured many terrorists in the aforementioned villages and the hills around them, destroying their fortified positions, weapons, and munitions, while engineering units combed the areas and dismantled explosive devices and landmines left behind by terrorists.

A military source announced establishing control over new areas in al-Sheikh Miskeen city in the northern countryside of Daraa after killing a number of terrorists.

Army units operating in al-Sheikh Miskeen city established control over streets, establishments and buildings in the northern, southern and eastern parts of the city and advanced further after destroying a number of barricades and fortifications for the terrorists and the fleeing of tens of them outside the city.

Army units advanced further after destroying a number of barricades and fortifications with all terrorists inside them, while dozens others fled away outside the city.

Engineering units combed the areas after establishing control over them and dismantled explosive devices and mines which were planted earlier by the terrorist organizations.

Since late December, army units in cooperation with supporting forces have carried out a wide military operation in al-Sheikh Miskeen

Earlier, the army units destroyed Jabhat al-Nusra and other Takfiri terrorist organizations’ positions and vehicles, some equipped with machineguns and loaded with weapons and ammunition in Daraa al-Balad and al-Mahata in the city of Daraa.

An army unit killed and injured all members of an armed terrorist group after targeting their gathering in Atman Town, 4km north of Daraa city.

Meanwhile, the terrorist organizations acknowledged on their social media websites the killing of a number of their members, among them Mohammad Musaab al-Hamadi of the so-called Liwa Shuhada Houran and Ibrahim Taha al-Hariri.

The terrorist organizations acknowledged the killing of 5 of their members and the injury of others in an ambush at Ghabagheb-al-Jameaat road in the northern countryside of Daraa, asserting that terrorist nicknamed Abu Ali and Yousef al-Atrash, Mohammad Abbas and Hussein Matroud were among the dead.

A military source told SANA that the army units destroyed positions and movements of Jabhat al-Nusra and other Takfiri terrorist groups affiliated to them in the neighborhoods of al-Rashideen, al-Liramoun, Bustan al-Bacha, Bani Zaid, Karem al-Maysar and al-Sheikh Said in the city of Aleppo.

The army inflicted heavy losses upon the terrorists of the Islamic State in Iraq and Syria (ISIS) , destroying a number of their vehicles, some equipped with machineguns after targeting their positions and hideouts in the villages of Tal Hatabat, Qutar , al-Muflisah and al-Bab

Meanwhile, the terrorist organizations acknowledged on their social media websites the killing of a number of their members, among them Basel Ahmad Homos.

Army units inflicted heavy losses in personnel upon terrorists from the so-called al-Izza gathering during operations against their positions in al-Latamneh town in the northern countryside of Hama.

A field source said in a statement to SANA that 13 terrorist were killed including Abdul- Naser Younes Khattab, deputy leader of al-Izza gathering in al-Latamneh.

Meanwhile, terrorist organizations acknowledged on their social media pages that Khattab was killed along with the terrorist Mohammad Heitham al-Kateb al-Mahmoud.

The Syrian Air Force carried out airstrikes on hideouts of ISIS terrorists in al-Qaryatain city at the outskirts of the Badiya desert 85 km east of Homs city, destroying a number of their bases and vehicles.

A military source told SANA that the Syrian Air Force also destroyed hideouts and concentrations for terrorists from Jabhat al-Nusra and other terror groups in Teirma’ala 7 km north of Homs city.

The source added that the army unit also destroyed a number of ISIS vehicles, some equipped with machineguns, in the countryside of the southern Sweida province.