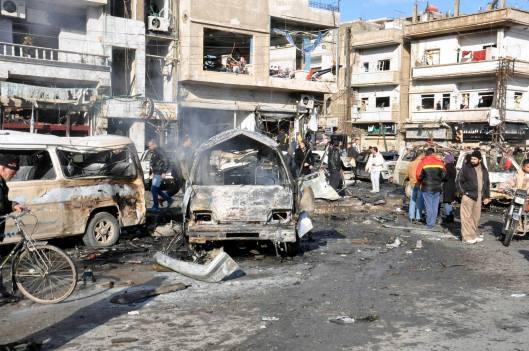 The first attack was caused by a car bomb that targeted a security checkpoint in the 60 Street, which was followed, while people were giving aid to the wounded,  by a second blast committed by a suicide terrorist with an explosive belt.

Killing people who are giving aid to others is typical of jihadist terrorism, the most inhuman and brutal.

(SANA updated, 26/1/2016) ~ 24 people were killed and many others were injured in two terrorist attacks that hit al-Zahraa neighborhood in Homs city on Tuesday.

The first attack was caused by a car bomb that targeted a security checkpoint in the 60 Street, which was followed by a suicide explosive belt blast, according to Homs Governor Talal al-Barazi.

The two attacks claimed the lives of (at the moment) 24 people and injured over 100 others, al-Barazi confirmed in a statement to SANA, noting that the death toll might climb as some of the injured are in critical condition.

Al-Barazi pointed out that there are civilians and members of the checkpoint among the dead. 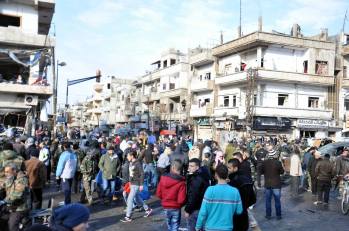 Meanwhile, SANA reporter mentioned that the two terrorist attacks caused massive material damage to the houses and infrastructure in the area.

The Cabinet condemned the two terrorist attacks, as Prime Minister Wael Halaqi said they aim at raising the terrorists’ morals especially after the victories achieved by the Syrian army over the terrorist organizations on different fronts.

On December 28, two similar terrorist attacks hit al-Zahraa neighborhood and claimed the lives of 19 civilians and left 43 others with severe injuries.

24 dead, over 100 wounded in ISIS-claimed double bombing in Homs, Syria

(RT, 26/1/2016) ~ At least 24 people have been killed and over a hundred wounded in two terrorist blasts in a residential area of the Syrian city of Homs, state TV reported. Islamic State has claimed responsibility for the attack.

According to provincial Governor Talal al-Barazi, two explosions occurred with a difference of a few minutes in the residential area of Al-Zahra. He said at first a car stuffed with explosives was blown up, parked in a densely populated quarter, then almost on the same spot a suicide bomber blew himself up.

Barazi said “the aim of the terrorists was the checkpoint of the Syrian security forces.” He added that“among the dead there were several on duty policemen at the checkpoint, but most of the victims are civilians.” 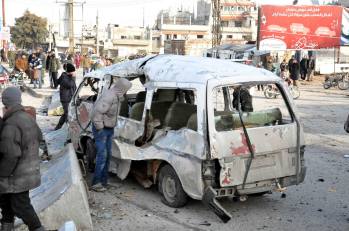 The explosions have caused damage to residential buildings and infrastructure of the neighborhood, SANA correspondent reported.

DAESH (Islamic State, IS, formerly ISIS/ISIL) has claimed responsibility for the attack. According to Reuters, the terrorist group said in an online statement that one of its fighters drove a car loaded with explosives to a security checkpoint in the Al-Zahra neighborhood and blew himself up. 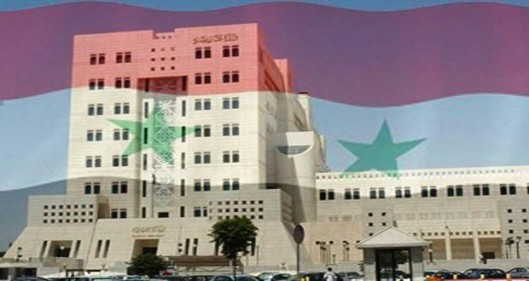 Damascus, Hazem Sabbagh, 26/1/2016 ~ The Foreign and Expatriates Ministry said that the two terrorist bombing that took place in Homs city on Tuesday and other similar terrorist crimes require an immediate and stern condemnation from Security Council and taking deterrent actions against the states that support and fund terrorism.

In two identical letters sent to the UN Secretary-General and to the head of the Security Council, the Ministry said that terrorist organizations detonated a car bomb on Tuesday morning in al-Siteen Street in al-Zahra’a neighborhood in Homs, and that attack was followed by another attack by suicide bomber using an explosive belt, claiming the lives of 24 civilian and injuring more than 100 civilians, some of whom sustained severe injuries, in addition to damaging houses and infrastructures in the area.

The Ministry noted that these bombings were carried out at a time when the date for holding the Geneva 3 meeting, which seeks to push towards a political solution for the crisis in Syria, is approaching.

The Ministry said that those two brutal bombings constitute a continuation of the barbaric and methodical terrorist acts committed by terrorist groups in Syria, groups that are supported by well-known regional and international states that employ terrorist to serve their personal political interests and irresponsible agendas, adding that these crimes also constitute a response to the political efforts to find a political solution by Syrians and to the success of national reconciliation efforts.

The letters also noted that the bombings are also an attempt to raise the morale of terrorist groups that are suffering repeated defeats at the hands of the Syrian Arab Army.

The Ministry said that the crimes and massacres committed by terrorist organizations like ISIS, Jabhat al-Nusra, Jaish al-Islam, al-Jabha al-Islamiya, Jaish al-Fateh, Ahrar al-Cham, and the “Free Army” wouldn’t have taken place without the constant arming, equipping, funding, and logistic support provided to terrorists by the governments of certain states.

The letters said that the Syrian government stresses that as per relevant Security Council resolutions and the principles of international law, such terrorist crimes require an immediate and stern condemnation from Security Council and taking deterrent actions against the states that support and fund terrorism whose destructive impact on peace and security isn’t limited to Syria but also affects the entire world.

The Ministry also stressed the need to cooperate and coordinate with the Syrian government in any effort for combating terrorism.