The aim of such terrorist and “cowardly” crimes is to raise the morale of the defeated terrorist organizations in light of the great victories made by the Syrian Arab Army in different areas.

Such terrorist crimes will not deter the Syrians from continuing the process of national reconciliation in different areas, particularly in Damascus countryside.

(Al-Sayyeda Zainab, Damascus, 31/1/2016, SANA) ~ Death toll from three terrorist bombings that rocked l-Sayyeda Zainab town in Damascus Countryside earlier on Sunday has climbed to 45 (50 updated a few minutes ago), a source at the Interior Ministry said.

The source earlier put the number of people killed in the attacks at 30, in addition to 110 injured, some of them were reported to be in critical condition.

The attacks, which hit in Koua Soudan area, were caused by a car bomb and two explosive belts, according to the source.

Terrorists detonated the car bomb at the bus station in Koua Soudan area, and after people gathered to help the injured, two suicide bombers with explosive belts blew themselves up at the site.

Massive material damage was caused due to the three bombings, added the source.

The aim of such terrorist and “cowardly” crimes is to raise the morale of the defeated terrorist organizations in light of the great victories made by the Syrian Arab Army in different areas.

Such terrorist crimes will not deter the Syrians from continuing the process of national reconciliation in different areas, particularly in Damascus countryside.

(Al-Sayyeda Zainab, Damascus, 31/1/2016, RT) ~ A series of blasts have struck the outskirts of Syria’s capital, Damascus. At least 45 people were killed in the mainly Shiite neighbourhood, Syria’s Interior Ministry reported. The Islamic State terrorist group has taken responsibility for the attacks.

According to the ministry, “more than 45 people were killed and dozens were injured.” Police say that the death toll is set to rise because “some of those injured are in a critical condition.”

More than 20 militia fighters, who have been fighting alongside government forces in Syria, are among those killed, TASS reported.

According to the television station of Lebanon’s militant Shiite Hezbollah group, the attacks took place in the Sayeda Zeinab district, where Syria’s major Shiite shrine is located.

A group of militants first detonated a car bomb near a bus stop near the Shiite shrine, Syrian state news agency SANA reported, quoting an Interior Ministry source. When people started gathering at the scene and tried to rescue the victims of the first blast, two suicide bombers blew themselves up nearby.

State television showed footage of burning buildings and wrecked cars in the heavily populated area in the south of the city.

IS claimed responsibility for the attacks, Reuters reported, citing Amaq news agency, which is affiliated with the terrorist group. Operations “hit the most important stronghold of Shiite militias in Damascus,” it said.

Syria’s UN Ambassador Bashar Jaafari has stated that Sunday’s blasts in Damascus confirm a link between the opposition and terrorism, Reuters reported.

The Sayyida Zeinab mosque, which contains the grave of a granddaughter of the Prophet Mohammed, is revered as a pilgrimage site by Shiite Muslims. The site has been targeted before, including in February 2015, when a blast ripped through a bus carrying Lebanese Shiite pilgrims headed to Sayyida Zeinab, killing at least nine people, in an attack claimed by Al-Qaeda affiliate Al-Nusra Front, AFP reported.

Also last year in February, two suicide attacks killed four people and wounded 13 at a checkpoint near the shrine.

The explosions took place as representatives of Syria’s government and the opposition began gathering in Geneva for the first UN-mediated peace talks in two years. 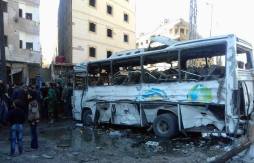 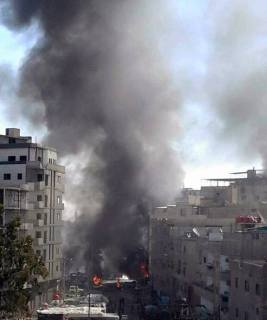 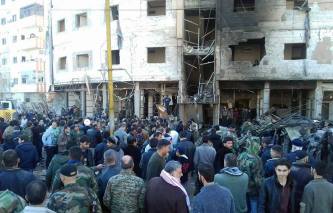