Fighters from the Kurdish Self-Defense Forces have begun storming the city of Tel Rifaat besieged by terrorists and located approximately 12 miles from the border with Turkey in Syria’s Aleppo province, a source from the self-defense forces said Monday. 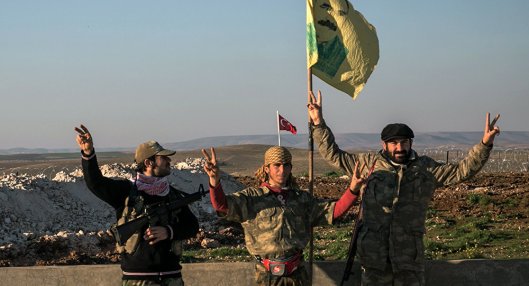 (Sputnik) – Tel Rifaat is one of the insurgent group’s last strongholds north of Aleppo.

On Sunday, the Lebanon-based Mayadeen TV said at least 350 Turkey-backed armed rebels had crossed into Syria from Turkey to support extremists fighting against Kurds near Tel Rifaat.

“Kurdish fighters began storming the city of Tel Rifaat from the northern flank. One of the largest al-Nusra Front’s stongholds is there. The city is of strategic importance and is on the road leading from Turkey,” the source told RIA Novosti.

Last week, the Syrian Army managed to achieve significant success in the fight against terrorists, destroying several key supply routes of terrorists in an area of Aleppo province.

In particular, the Syrian Army and the National Defense Forces (NDF) have managed to cut off several main supply lines of al-Nusra Front militants in the town of Mayer located between the city of Aleppo and the country’s border with Turkey.

Meanwhile, the Turkish Armed Forces have been shelling Kurds’ positions in Syria for a third day in a row.