(Homs, 21 January 2016) ~ At least 34 people were killed and over hundred injured in a twin terrorist car-bombing Sunday near al-Arman neighborhood entrance at al-Siteen street in Homs city, but the number is expected to grow, due to the many serious injuries.

Local ‘Syrian Arab News Agency’ reporters said earlier that 14 people were killed and tens were injured in a twin terrorist car-bombing attack, but unfortunately the number of victims has grown rapidly.

The explosions at a traffic light at al-Siteen Street in the al-Zahra neighborhood happened within minutes of each other, witnesses said. One of them may have been triggered by a suicide bomber.

Witnesses said at least one of the two blasts was triggered by a suicide bomber driving a car.

RIA Novosti News Agency cites a medical official who estimated a higher casualty number, saying the attack has claimed at least 46 lives and injured as many as 110.

The Syrian Government Cabinet condemned the two terrorist bombings that hit Homs city and claimed the lives of many, too many, Syrians.

Prime Minister Wael Halaqi said in a statement that such terrorist bombings, which targeted civilians including school and university students, aim at killing the will of work and production of the Syrian people.

Homs is a city that has long since been reclaimed by the presence of mercenary terrorist gangs.

He affirmed that such criminal and brutal acts will not derail the Syrian people from their determination in fighting terrorism and continuing the national reconciliation process.

The premier shouldered the states supporting terrorism the responsibility of such terrorist acts calling on the world countries and international organization to work for putting an end to such countries which support and finance terrorism.

Daesh (ISIS) mercenary-terrorists (for the Zionist-jihad) claimed responsibility for a bombing in Homs last month, which killed at least 24 people. Another attack in December claimed 32 lives.

The new terrorist bombings come in the wake of significant Syrian army gains against mercenary-terrorist gangs on several fronts, particularly the northwestern province of Aleppo near the Turkish border, but also in the countryside of Latakia, Daraa, Deir Ezzor, Hasaka, with the Syrian Armed Forces and its allies pointing right on Raqqa.

The foreign-sponsored conflict in Syria, which flared in March 2011, has claimed the lives of some 470,000 people and left 1.9 million injured (according to the Syrian Center for Policy Research).

Moreover, 6.36 million people have been displaced internally and more than four million others have fled the country since the beginning of the conflict. That accounts for 45 percent of the country’s population, which has shrunk by 21 percent.

Syria accuses Saudi Arabia, Turkey and Qatar (…and their Zionist master…with its NATO, USA puppet-regimes…) of funding and arming terrorist groups operating inside the country, including Daesh. 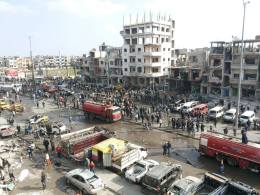