It’s no coincidence that as Washington’s criminal covert war for regime change in Syria comes off the rails, we are now seeing a new flare up Libya – allegedly to combat the ISIS terror group.

The Libya theatre is re-opening in order to distract from the setback to Washington and its accomplices in their losing enterprise in Syria.

The New York Times tells us that the follow-up deal hammered out this week between the US and Russia for a second attempt at a truce in Syria is “the latest diplomatic effort to end the five-year-old civil war.”

Leave aside the misnomer “civil war” for a moment. The assertion that Washington is expending diplomacy to end violence in Syria is the jarring term. Anyone who has followed the Syrian conflict with independent intelligence – as opposed to Western media misinformation – will not buy that claim.

Russia may well have bona fides in trying to end the Syria war. But Washington embarking on a diplomatic effort to end the five-year-old conflict? That’s just out-right fabricated nonsense.

The violence in Syria has from the outset been a foreign-backed covert war for regime change. Washington, Britain, France and their regional clients in Turkey, Saudi Arabia, Qatar, Jordan and Israel launched the aggression to topple the Russian and Iranian-allied Assad government in March 2011.

The country was infiltrated with a proxy army of terrorists – of which ISIS is but one component –so as to achieve regime change by plunging Syria into a bloodbath. 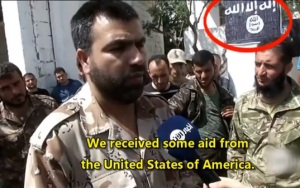 US-backed Hazzm Movement is touted as a “secular and moderate rebel group” by Washington, but in reality it is a jihadists terrorist gang

So, the notion of “civil war”that the New York Times and other Western media continually peddle is a contemptible misnomer, used for the purpose of concealing the real nature of the war –a foreign-backed aggression, entirely illegal and responsible for the near-destruction of a nation.

This latest bid to call a truce in Syria is not about finding a peaceful settlement, as far as Washington and its assorted partners-in-crime are concerned.

Last week, the same purported cessation did not happen, partly because the terror proxies were making outlandish demands that the Syrian government and Russia must call off all bombing and ground operations against their terrorist affiliates.

Another reason for why the earlier truce did not occur was that Saudi Arabia and Turkey, with passive consent from Washington, Britain and France, insisted on engaging in foreign aggression against Syria through cross-border shelling and threats of invasion.

There is little chance that this second effort at calling a cessation will work either. The deal worked out this week between John Kerry and his Russian counterpart Sergei Lavrov again excludes the terror groups ISIS and Jabhat al Nusra. So Syria and Russia will continue –rightly –to strike those militia and “related groups”, as stated in the Kerry-Lavrov accord.

The term “related groups”applies factually and legally to the vast majority of militia in Syria. The West may pretend that such militia are “moderate rebels”–but that supposed distinction peddled by the West is simply a farce. ISIS and Nusra are integrated with the so-called “moderates” including the much-vaunted and chimerical Free Syrian Army.

But here is another reason why the latest seeming attempt at a truce will not work. It is cynically being used as a tactical pause by Washington and its accomplices to reorganize their proxies. Their covert army has been taking a severe beating since Russia sent its fighter bombers into Syria last September. Russia’s air power and Syrian army ground forces have been rolling up the Western proxy army and, decisively, have cut off their key supply routes from Turkey.

Perhaps surprisingly, it was the New York Times that blurted out the cynical calculation behind Washington’s so-called truce effort. In the same article cited above, the Times alludes, in the final two paragraphs, to the bigger picture.

“For the Obama administration, a partial truce in Syria may simply be a way to keep a lid on the violence there while it turns its attention to planning and carrying out military operations against ISIS fighters in Libya,” the paper tells us.

The NY Times is a reliable echo chamber for official thinking in Washington. It goes on to quote Andrew J Tabler, who is described as “an expert on Syria”at the Washington Institute for Near East Policy. He said: “Washington’s stated policy is not to end the Syrian war. They just want to settle it down so it boils a little more slowly. It’s yet another attempt to contain a conflict that has been uncontainable.”

There you have it: the “truce” is merely a turning down of the heat that Washington and the other foreign powers have been scorching Syria with.

It is no coincidence then that Washington and its NATO allies, Britain, France and Italy, are now shifting military action to Libya. Following the US air strike last week on an alleged ISIS training camp west of Tripoli, the Obama administration said that more such strikes are on the way.

Various reports indicate, too, that the US is preparing a major military foray in Libya. Of course, ISIS in Libya is just the cover story for what would be yet another illegal incursion in a foreign country.

The real purpose, it seems, is that Libya will provide a much-needed distraction from the disastrous Washington-led covert war in Syria.

This video is produced by Western Journalism (http://www.westernjournalism.com). It makes the case why US President Barack Obama must be impeached for supporting terrorist organizations in Syria that are aiming to topple the secular government in Damascus led by Syrian President Bashar al-Assad.