Military planes are landing in Damascus and Aleppo airports respectively carrying 6000 officers and soldiers of the “Sabereen Unit” to support the on-going ground offensive in reef of Syria.

The Lebanese Hezbollah is also injecting fresh forces to the same area where also the Syrian Kurds are advancing against Salafist Jihadist led by al-Qaeda in Syria, also known as Jabhat al-Nusra, and their allies.

Iran and Russia are determined to change the map of Syria to the advantage of Damascus before the end of this coming summer.

Cities are surrendering without fight like Dayr Jamal, and others, like Tal-Refaat, are negotiating an exit to rebels to avoid the destruction of their city.

“The IRGC Sabereen unit operating in large Aleppo outskirts (North, South, West and East reef) was established more than ten years ago in Iran and were selected as a Special Elite Forces. These are trained to participate to warfare combat, to penetrate deep into and behind enemy lines and above all to fight Jihadists. These are the spearhead against al-Qaeda in Northern and western reef Aleppo and Eastern reef against the so-called “Islamic State” (ISIS) group. Over 47 officers and soldiers are reported killed in the last Aleppo offensive”.

“Iran misinformation campaign in the last few month deceived the main stream media who believed its forces are withdrawing from Syria, when the military transport aircraft were conveying fresh troops to Aleppo to plan the breakage of the blockade around Nubbl and Zahra, the two northern Shia cities besieged for over three years by al-Qaeda and its allies. Following the downing of the Russian Jet, the Su-24 over the Turkish-Syrian borders by Turkey last year, Russia reshuffled its military plans to get much deeper involved in Syria and aim to cut all supply lines and link between the Jihadist and their safe heaven in Turley. Therefore, plans were drawn to control the borders starting from reef Latakia, where the military offensive is advancing rapidly and from the north of Aleppo. An operational room was established in Aleppo to direct the northern and the southern fronts where al-Sabereen unit is mainly engaged”.

According to the source,

“When Saudi Arabia and the United Arab Emirates expressed their will to send a military force to Syria, as agreed with the United States of America, the answer came from the commander of Iran’s Revolutionary Guard Corps, Major General Mohammad Ali Ja’fari. His forces are directly involved on the ground in the North against al-Qaeda (Nusra) and the North East against ISIS. This means the IRGC and Hezbollah will be face to face with any troops landing in their operational area without any coordination with Damascus. The Iranian military operational room is in charge of recovering the bordering area between Turkey and Syria and to fight against any enemy force at the exception of the Kurds and their allies, considered non-enemy forces”. 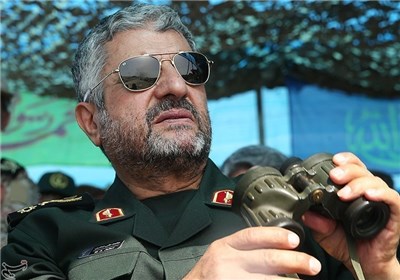 “The battle of Ratyan was a real turn in the northern campaign. It was the most defended city and the heart of al-Qaeda and its allies, fortified since years above and under the ground. It was also the operational centre leading the siege around Nubbl and Zahraa and the northern front. The Russian Air Force destroyed these fortifications and killed hundreds of Jihadists, according to their own count. The fall of Ratyan set an example to other northern cities that are negotiating a surrender term without fighting. This is what happened in Deyr Jamal, Alqamiyah and Kfarnaya, at the outskirt of Tal-refaat, the last city before Azaz and through it to the Turkish borders. Tal Refaat is also negotiating surrender with the advancing forces. Forces are finding cities already abandoned but well fortified with several long tunnels and weapons left behind. With the breakage of the siege, thousands of fighters protecting the two cities were divided to the Northern and to the southern fronts. It helped increasing the strength of the spear-head units and giving a unique opportunity to the advancing forces against al-Qaeda and its allies”.

“Russia, Iran and Hezbollah aim to change the military geographic map of Syria to their advantage before the end of this coming summer. The one billion dollars invested by Saudi Arabia to offer 13000 TOW anti-Tank guided missiles helped only to increase the destruction of the Syrian cities. Instead of pushing ground-armoured troops, Russia is using its Air Force to destroy any resistance and Iran is sending more infantry, relying less on tanks. Hence the need to inject more specialised troops to fulfil important military objectives, planned in the next six months. These forces, from Iran and Hezbollah, are still coming in large numbers to respond to future military plans”.