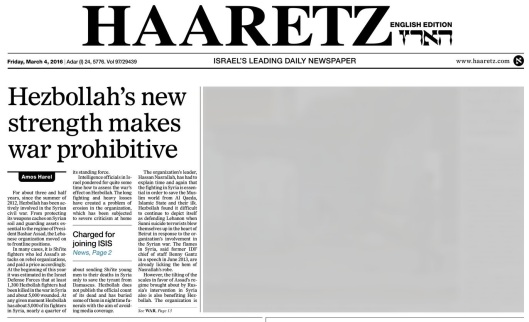 Excerpt from:  “Sayyed Nasrallah: Israel, allied Arab regimes will fall all together”

Hezbollah Secretary General Sayyed Hasan Nasrallah asserted on Sunday that the Zionist entity and all its allies among the Arab regimes will fall all together, noting that the Arab people will stressed that ‘Israel’ will keep their enemy.

Delivering a speech during Hezbollah ceremony to mourn martyr commander Hajj Ali Fayyad, aka Alaa of Bosnia, Sayyed Nasrallah said that the party highly appreciates all who supported the Resistance against the Gulf decision to label it as a terrorist group.

His eminence noted that the recent tension which struck the Lebanese-Saudi relations is attributed to KSA’s 5-year catastrophic failure and disappointment in Lebanon, Syria, Iraq, Yemen and Bahrain.

Sayyed Nasrallah added that the Saudi regime had expected that few weeks would be enough to defeat their opponents in Yemen and Syria even if the successive rulers were the terrorist groups, which denies KSA’s anti-terrorist claims.

In this context, Sayyed Nasrallah wondered, “what would have happened in Lebanon if the terrorists had achieved victory in Syria?”

Sayyed Nasrallah explained what happened in one of the care houses few days ago in Yemen’s Aden where the terrorists stormed the building and killed a number nuns, Muslim elders and Indian nurses, considering that they are disbelievers.

We understand the rage of the Saudis who wanted to blame Hezbollah for all their failures in the entire region, according to Sayyed Nasrallah who emphasized that the Resistance feels proud for being viewed as the party who can frustrate the Saudi schemes.

Accordingly, the Saudi blacklisted Hezbollah as a terrorist groups, Sayyed Nasrallah pointed out.

His eminence went on to underline the popular reaction in a number of Arab countries to the GCC’s decision against Hezbollah, considering that it indicates the sublime position of the Resistance in the view of the Arab people “who have kept the Palestinian cause as a priority.”

“The Arab popular reaction challenged the political, takfiri, media and financial pressures in the region.”

Sayyed Nasrallah considered that the popular reactions in a number of Arab countries sent a clear message to Israel that the Zionists can never be the guards of the Sunni Muslims.

“The message also stresses that the Israeli existence in the region can never be normalized despite all the attempts on the Zionist officials and some Arab leaders.”

“The Bahraini regime jails the Muslims clerics and receives a Zionist Rabbi to highlight its relations with Israel.”

On the contrary, Sayyed Nasrallah cited the instance of the Egyptian parliament where one MP beat his colleague with his shoes for receiving the Israeli ambassador in his house, what stresses the real attitude of the Egyptians towards the Israelis despite Camp David agreement.

None of the Arab regimes will be able to normalize its relation with the Zionist entity, Sayyed Nasrallah said.

“O’ Zionists, if any Arab regime supports you, it will fall along with you.”

Saudi will soon discover that it has lost its battle in the entire region, according to Sayyed Nasrallah.

Hezbollah leader tackled the various stages of the martyr commander Hajj Ali fayyad’s life, stressing his fight against the Zionists in southern Lebanon, against the Serbian army in Bosnia and against the terrorists in Syria and Iraq.

Sayyed Nasralah highlighted that Hajj Alaa joined Hezbollah during 1980’s as a fighter when he was young, believing in the autonomous capabilities of the Resistance to confront the Israeli occupation regardless of the Arab official support.

“Martyr Ali Fayyad, then, turned to be a main sacrificing  commander that established Hezbollah Special Force and contributed to 2000 and 2006 victories.”

Sayyed Nasrallah hoped that the Arab countries halt troubling the Resistance as they did during 2006 war, adding that the Arab regimes, including mainly the Saudis, have always worked to protect ‘Israel’ in order to keep their thrones by stirring the Sunnite-Shiite seditions.

“Hajj Alaa and his brethren did not wait for the Arab league to conclude an Arab consensus and a unified strategy in order to fight the Israelis.”

We have resorted to the resistance path in order to liberate our territories and defend our country against the Israeli enemy, and the Arab countries that are blacklisting Hezbollah nowadays have not had anything to do with the Resistance, according to Sayyed Nasrallah.

“The people-army-resistance formula has always protected Lebanon against the Israeli threats, not the Arab league.”

“The Saudi regime schemes conspiracies against all who try to confront the Zionist entity.”

Sayyed Nasrallah said that Hezbollah sent a group of his fighters and commanders to Bosnia during the nineties, including Hajj Alaa, to defend the Muslims, wondering if this act can be considered as terrorist.

Sayyed Nasrallah asked, “For those who accuse Hezbollah of sectarianism, are the Muslims in Bosnia Sunnites or Shiites?.”

On the contribution of Hajj Alaa in Iraq, Sayyed Nasrallah clarified that after ISIL terrorist group invaded in 2014 Mosul, Anbar, parts of Salaheddine and Kirkuk and reached areas near Baghdad, and entire Iraq became in danger; the Iraqi leadership asked us to send a number of commanders and military trainers to help the local forces defend their country.

“Hajj Alaa was one of the first Hezbollah commanders who joined the Iraqi forces to fight against ISIL.”

“Thanks to the religious reference in Najaf, represented by Grand Ayatollah Sayyed Ali Sistani, dozens of thousands of Iraqis joined the Popular Mobilization Forces that have changed the formula in the entire country.”

Addressing the Saudis, Sayyed Nasrallah said, “You have formed a coalitions that is composed of 70 countries, yet it has failed to reach any battlefield advance against ISIL.”

“What is ironic is that Saudi has formed an Islamic coalition, but that US leads it!”

“It would be misleading to think that we would wait for the Arab League approval in order to help the Iraqis against ISIL. We were fighting in Iraq under an Iraqi leadership, and if we were fighting under an American leadership, they would not label us as terrorist,” he added, referring to the GCC resolution.

To the Gulf countries, Sayyed Nasrallah said, “If it had not been for the Popular Mobilization forces in Iraq, ISIL would have been now in your palaces and it would have been killing you and enslaving your women.”

“Arab chivalry is when every Arab goes to Iraq to defend the dignity and holy sites of the Iraqis, not to label those defending Iraq as terrorists,” Hezbollah Secretary General went on to say.

“ISIL would have destroyed the holy shrines in Iraq if it had not been confronted.”

Sayyed Nasrallah tackled martyr commander Ali Fayyad’s role in Syria, saying that Hajj Alaa was also one of the first Hezbollah military commanders who joined Syria fight against the terrorist groups, adding that he was injured several times, but that he rejected to stop fighting in Syria till martyrdom.

Hajj Alaa’s son, Hadi, delivered a speech to eulogize his father, stressing that he will would stick to the martyr’s path

Hezbollah is completely convinced that his role in Syria is constructive, according to his eminence who added that no one can prevent the Resistance from doing what it considers as suitable, nor can others force it to carry out any step if it rejects.

“Hezbollah gained a religious approval from the Supreme Leader Sayyed Ali Khamenei to fight in Syria, but his eminence did not oblige the party to intervene in the Syrian fight.”

The Resistance will keep the Umma’s hope of defeating the enemies, if God wills, Sayyed Nasrallah concluded.