Failing to place the ‘Veto’ [for the ‘No Fly Zone’ over Libya] to the UN Security Council was one of the most serious and inexcusable errors of modern Russia.
(SFP-WP Newsroom)

To those who believe that the colonial era is over, the examples of Iraq, Libya and Syria exist to prove them wrong. In 2001, the United States decided – in the logic of the ’War on Terror’ – to attack these three countries and a few others. Certainly, the wars against Tripoli and Damascus did not break out until ten years later, the time necessary to deprive these states of their defences, and to build international coalitions in order to mask colonial objectives as humanitarian operations. Let’s look again at the case of Libya.

By Manlio Dinucci, Voltairenet ~ Submitted by ‘The Old Sniper‘

In the ambiguous comedy played out in the little theatre of politics, lead actor Renzi proclaimed that in Libya «Italy will play its part» – and as soon as the Pentagon said that Italy will assume the role of «guide», he declared – «Italy’s military mission in Libya is not the order of the day» – whereas in reality, it has already begun, with special forces that the Parliament has placed under the orders of the Prime Minister.

In 1911, Italy occupied Libya with an expeditionary force of 100,000 men. Shortly after the invasion, the Italian army shot and hanged 5,000 Libyans and deported thousands more. In 1930, on the orders of Mussolini, half of the population of Cyrenaïca, about 100,000 people, were deported into about fifteen concentration camps, while the aviation crushed the resistance by bombarding the villages with chemical weapons, and the army surrounded the area with 270 kilometres of barbed wire. The head of the resistance, Omar al-Mukhtar, was captured and hanged in 1931. 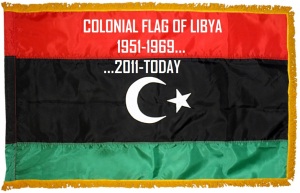 So began the demographic colonisation of Libya, by setting apart the most fertile land and forcing the populations into the arid land. At the start of the 1940’s, Italy, now beaten, was replaced in Libya by Great Britain and the United States. Emir Idris al-Senussi, placed on the throne by the British in 1951, conceded to these powers the use of Libya’s air, naval and land bases. Wheelus Field, at the gates of Tripoli, became the main US air and nuclear base in the Mediterranean.

In 1956, King Idris concluded a deal which exonerated Italy of the damage done to Libya, and allowed the Italian community to maintain its patrimony. The Libyan oil-fields, discovered in the 1950’s, ended up in the hands of the UK company British Petroleum, the US company Esso, and the Italian company Eni. 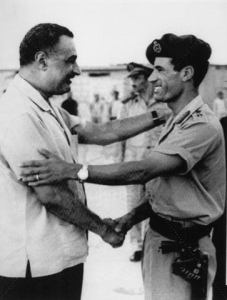 The brutally repressed nationalist rebellion led to a Nasserian-model bloodless coup d’État in 1969, by the «free officers» directed by Muammar el-Kadhafi.

The monarchy was abolished, and the Libyan Arab Jamahiriya obliged the USA and the United Kingdom to evacuate the military bases and nationalised the foreign properties. In the following decades, according to the World Bank, Libya grew to become part of the «high indicators of human development», with an annual GDP growth of 7.5%, and a wage per citizen which was in the upper-average bracket – Libyan citizens enjoyed universal access to primary and secondary education, and 46% had access to higher education. More than 2 million African immigrants found work there. 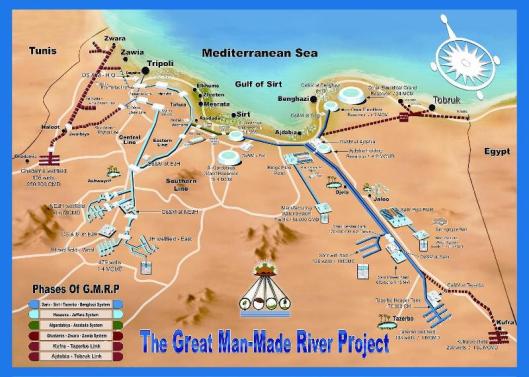 This state, which constituted a factor of stability and development in North Africa, had, with its investments, favoured the birth of organisms which could have created financial autonomy and an independent currency for the African Union.

The United States and France – as Hillary Clinton’s emails prove – decided to block «the Kadhafi plan for the creation of an African currency» as an alternative to the dollar and the CFA franc.

For that reason, and in order to appropriate Libyan oil and territory, NATO, under US command, launched the campaign against Kadhafi, in which the Italian «left-wing opposition» played a major part.

The Libyan state was therefore demolished by war and by attacks from the interior by special forces and terrorist groups. The resulting social disaster, which has created more victims than the war itself, especially among the immigrants, opened the door for the reconquest and sharing of Libya. What is Italy now marching into, as it stamps on the Constitution and revisits its colonial past? 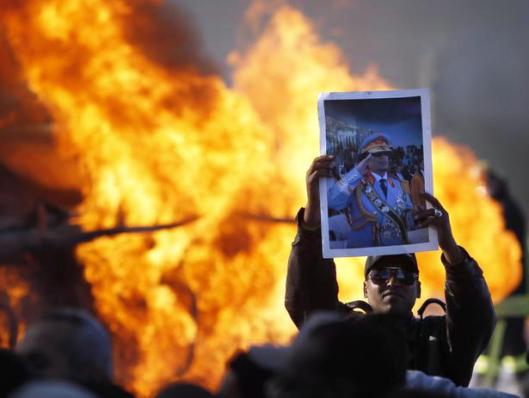 1 thought on “The recolonisation of Libya”