A new trove of documents, obtained by an RT Documentary crew who recently uncovered details of illicit ISIS oil business with Turkey, sheds light on jihadists’ lucrative trade of looted antiquities along their well-established oil and weapons transit routes.

There is no official accounting that would illustrate the true scale of looting being undertaken in Syria, a land once rich with cultural treasures. However, there is no doubt that since radical Islamists established a foothold in the region under raging civil war, pieces of the world’s global heritage have ended up in the hands of terrorists.

Along with oil smuggling, a lucrative trade in antiquities has become ISIS’s source of income to support its devastating operations, many of which leveled unique historic sites such as Palmyra. Artifacts, some worth thousands of dollars apiece, have been turning up in antique markets from eastern Europe to the US.

Following the exposure of the details of the ISIS oil business, RT has exclusively obtained additional evidence that sheds light on the jihadists’ black market of plundered treasures and its transit routes via Turkey.

According to a document that the Kurdish People’s Protection Units (YPG) turned over to an RT Documentary crew, the so-called Ministry of Natural Resources established by ISIS to hold grip of the oil operations has a separate “Department of Artifacts.”

“One of the new documents is a note that has the same letterhead of ISIS’s Ministry of Natural Resources as the oil bills of sale, which we discussed last time,” a reporter, whose name and face have been obscured for security reasons, explained. The letterhead, similar to those found on oil invoices that Kurdish soldiers seized from what used to be the homes of IS fighters, is visible in the upper-right corner of the newly obtained document.

The note, apparently addressed to checkpoint sentries, asks “brothers at the border” to allow a Turkish antiquity seller into Syria for the purposes of mutual profit.

“To the brother responsible for the border, Please assist the passage of brother Hussein Hania Sarira through your post along with the man from Turkey – the artifacts trader, for the purpose of working with us in the department of artifacts in the Ministry of Natural Resources. May Allah bless you, Loving brother Abu Uafa At-Tunisi.”

While filming in the town of Shaddadi, located in the Syrian province Hasakah, RT reporters came across archaeological pieces, fragments of various ceramic pots. Abandoned in a tunnel, which ISIS fighters fled through, they were discovered by the Kurdish YPG troops after they liberated Shaddadi from jihadists in the February 2016.

No one knows where those objects originally came from, but Kurdish fighters also found an old map in French, which could date as far back as colonial times. It indicates the excavation grounds.

Besides providing revealing insight into ISIS money-making, the note supports the previous suppositions that ISIS is selling artifacts via the same trade route, which, according to what RT’s crew was told, it used to bring across weapons and supplies, right under Ankara’s nose.

The fact of Turkey’s lax control and inaction has been recalled by a young fighter in an operational video that RT also obtained from the YPG. He was filmed after being captured by Kurdish troops at the border town of Tel Abyad, which was formerly a trade corridor between Turkey and ISIS.

The captured terrorist admitted that losing Tel Abyad had dealt a severe blow to Islamic State activities and its trade routes, as well as direct commutation lines with representatives of Turkish security services.

“When the Kurdish militia took over Tel Abyad, the connection was lost and foreign fighters could not get in,” the Islamist fighter testified. “The communication with the Turkish security services was broken, we could only communicate via civilians or spies.”

The terror group was also hit financially, suffering a serious blow to one of its major businesses – the oil smuggling.

“The goods that came from Turkey have also disappeared because the Kurdish YPG fighters have blocked the road through Tel Abyad. Also, the tankers can’t drive through the area. That has put the organization in a complicated financial situation,” the apprehended militant told the YPG fighters.

“We, Daesh, financially depend on oil”

The jihadi files showed that IS has kept very professional records of their oil business, including the name of the driver, the vehicle type driven, and the weight of the truck, both full and empty, as well as the agreed upon price and invoice number. 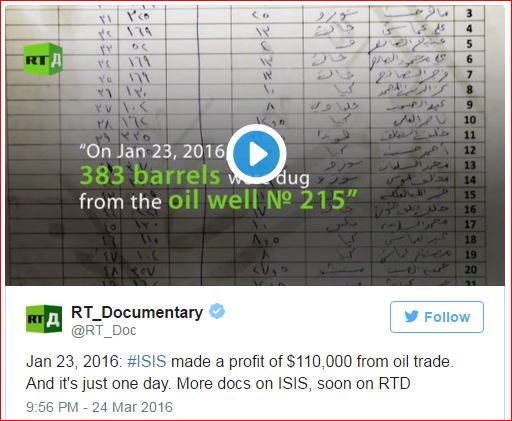 As local residents who had been forced to work in the IS oil industry told RT earlier, “the extracted oil was delivered to an oil refinery, where it was converted into gasoline, gas and other petroleum products. Then the refined product was sold.”

“Then intermediaries from Raqqa and Allepo arrived to pick up the oil and often mentioned Turkey,” they said.

The operational video of the Kurdish-captured Islamic State militant revealed more details of oil-related work inside ISIS, including the salaries terrorists were paid.

“We, Daesh, know that we financially depend on oil. Earlier it was said we only sold to civilian buyers, but there’s no way they could buy so much. Our wages are from $50 to $100, depending on whether you are married or not. I am married and have a baby, so I was paid $135. When the oil supply across Tel Abyad was cut-off, the problems started,” he said. 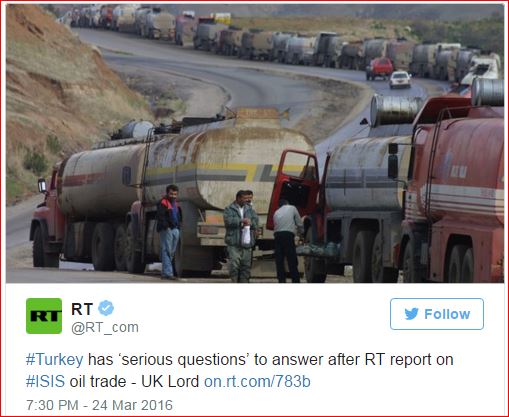 Since RT made its revelations last week, a stream of questions poured on Turkey with experts and high-profile politicians demanding from Ankara explanations to the “very convincing” report that exposed its alleged links to terrorists.