A covert ‘Plan B’ for Syria reserved for a “violation of ceasefire” is being pushed to the US president, anonymous officials told media. Arming “moderate” Syrian rebels with anti-aircraft weapons to fight the “Russia-backed regime” is again on the table.

Back in February, the Wall Street Journal first reported that President Barack Obama’s senior military and intelligence advisers were insisting that a back-up plan is necessary to “counter Russia” in Syria. 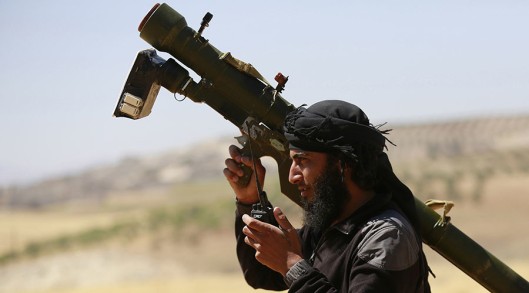 Moderate opposition’s terrorist in Syria with an American MANPAD to shoot down Russian and Syrian warjets: is this the US way of fighting terrorism? Arming the terrorist gangs? A truly sociopathic system.

The fresh details obtained by the WSJ suggest the CIA has given “provisional assurances” to coalition members to expand support to Syrian armed opposition groups fighting troops of President Bashar Assad. Still, the White House reserved the right to define which weapons systems are to be introduced to the battlefield – if the truce fails and full-scale fighting resumes.

On the eve of the ceasefire agreement coming into effect in Syria at midnight on February 27, the heads of Middle East intelligence agencies met to lay out a plan for waging war after the truce. And consultations on the matter never stopped ever since.

Today Washington and its allies, such as Ankara and Riyadh, are discussing which weapon systems are to be delivered to “vetted” Syrian rebels under this secret program, the WSJ reports.

Experts agree that what the anti-government forces in Syria need the most are electronic means to ensure effective suppression of President Bashar Assad’s artillery batteries and take down fighter jets. For the latter purpose, man-portable air-defense systems (MANPADs) are on the table, with Turkey and Saudi Arabia eager to supply them to the Syrian rebels.

The WSJ claims that US officials have conveyed a “private message” to their Russian counterparts that a return to full-scale fighting could “end up putting more Russian pilots in danger.”

The rebels have already obtained a “small number” of MANPADs “through illicit channels,” the CIA hints, thus posing danger to civil aircrafts. The CIA is now busy preventing more MANPADs from“slipping uncontrollably” into the war zone.

“If the ceasefire collapses, if the negotiations don’t go anywhere, and we’re back to full throttle civil war, all bets will be off,” the WSJ cited a senior Obama administration official as saying in a message to Moscow. “The outside patrons will double and triple down, throwing everything they can into Syria, including much more lethal weaponry.”

The CIA refused to comment on the alleged ‘Plan B’, agency spokesman Ryan Trapani told Sputnik on Wednesday.

Actually, the “full-scale fighting” the US warns of never ended in Syria, at least against some parties in the conflict: no armistice was signed with terrorist groups like Islamic State (IS, formerly ISIS/ISIL) and Al-Nusra Front.

Since the beginning of the ceasefire six weeks ago, dozens of local rebel groups throughout Syria joined the truce or even teamed up with the government forces against the terrorists. The armed formations that opted to side with terrorists are being bombed by Russian and Syrian air forces.

In the given conditions, the question about who would announce that the ceasefire has been violated remains open. Just as soon it could be voiced at the upcoming peace talks between Damascus and opposition groups that are set to resume this week in Geneva.

In the meantime, Washington’s Arab allies suggested high tech means to limit MANPADs’ operability by fitting them with “geographical sensors” to prevent them from being used outside designated areas, but the US remained silent to the proposal. Instead, Washington has been reportedly pressing main sponsors of the Syrian armed rebels, namely Qatar and Saudi Arabia, to use their influence to order the Syrian rebels to abide by the ceasefire. 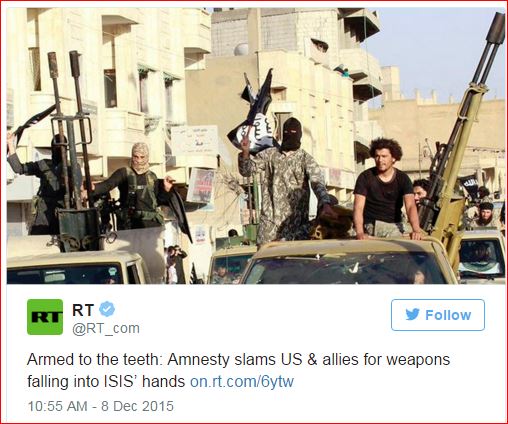 The CIA’s covert program to provide the Syrian anti-government forces with “limited supplies” of small arms and ammunition was launched in 2013 and has been growing steadily. A year later, the CIA was already providing rebels with antitank TOW missiles today actively used on the battlefield against Assad troops and eventually rescue groups of the Russian task force deployed to Syria.

Video of mercenary-terrorists and TOW operators [using BGM-71 TOW American-made and supplied by the United States], who got captured and ‘welcomed’ by Syrian forces. Two were identified as those who blew up Russian rescue helicopter searching for SU-24 pilot, killing one Russia marine and posting videos on Youtube.
There is no place on earth where these killers can hide: all will be found.
The prisoners have not been executed and are in good health: they are now collaborating with the Syrian intelligence, providing very useful information to track down their accomplices and their hideouts, as well as those who provided them with weapons and logistical coverage.