ISIS started as rebels under the US occupation of Iraq. They grew by ravaging Libya and Syria. Their backers are Saudi Arabia and Turkey, and they fight as proxies for US neocons and allies. The motives are oil, gas, and empire-building. 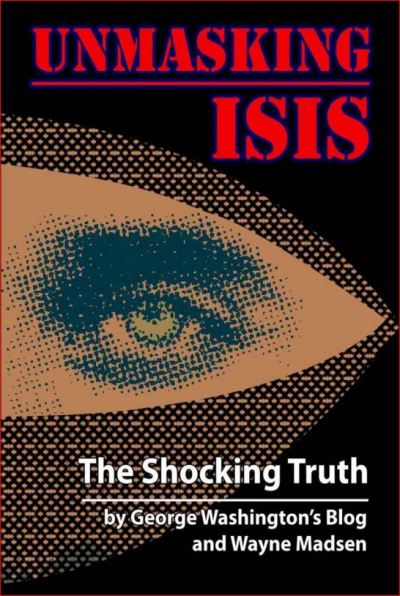 “ISIS is a supercharged new brand of Al Qaeda, which like Gladio was founded by the US to fight Russia.

The so-called founders and bogeymen of ISIS, Zarqawi and Baghdadi, were puppets invented by the CIA.

ISIS is the latest offensive in a very long-term Anglo-Zionist “Divide and Conquer” project to balkanize and subjugate the Middle East, by fostering narrow sectarianism and infighting among its peoples.

Britain installed the Saudi-Wahhabi monarchy over 200 years ago, which is the main source of funding for Islamic extremism, including ISIS.

Turkey’s dictator Erdogan runs ISIS for NATO; like the Saudis, he is an Islamic fundamentalist and a long-term ally of Israel.

Turkey’s dictator Erdogan runs ISIS for NATO; like the Saudis, he is an Islamic fundamentalist and a long-term ally of Israel.

ISIS fighters were used to smash up and take over Qaddafi’s Libya, then sent through Turkey to lay waste to Syria and Iraq.

The US and its allies in Europe and the Middle East covertly support ISIS, while pretending to fight it, leaving Russia to take action on its own to quash the cancer threatening the entire region.

However, the attacks in Paris, San Bernardino and Brussels are best explained as classic Gladio false flag operations, pinned on ISIS to foster the “Clash of Civilizations”.

The name ISIS is short for “Islamic State in Iraq and Syria,” and it is also known as ISIL, Daesh and Al Qaeda in Iraq.

“George Washington” – the pen name for the head writer at Washington’s Blog – is a busy professional, a former adjunct professor, an American and a family man. He is post-partisan … believing that neither the Republican nor Democratic parties represent the interests of the people as opposed to the big banks, major corporations, and the military-industrial complex. He strives to provide real-time, well-researched and actionable information.

Wayne Madsen is an American journalist, television news commentator, online editor of Wayne Madsen Report.com, investigative journalist and author specializing in intelligence and international affairs. Throughout Wayne’s career he has uncovered many explosive stories, reporting from places like Washington, Iraq, Israel, the Congo, Rwanda, Pakistan, Hong Kong, Libya, Thailand, Cambodia, London, Paris, Venezuela. He has interviewed famous people and heads of state. Wayne has written for many daily, weekly, and monthly publications, and has been a television commentator on many programs, including 60 Minutes, Russia Today, Press TV. He has authored ten books.