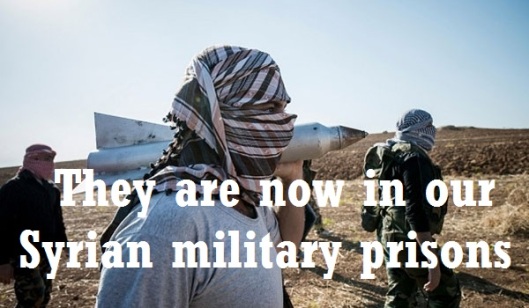 (FNA, 18/5/2016) ~ Several non-Syrian members of the ISIL, including their Iraqi commander, were arrested by the Syrian Army troops in a camp of Iraqi refugees, intelligence sources said Wednesday.

“Mustafa Ahmed Murshid, who had fled Iraq and had hidden among the Iraqi refugees coming from al-Sajariyeh East of Ramadi, was captured by the Syrian army men,” the sources said, adding, “The Syrian soldiers, tipped off by one of the tribal leaders about presence of Murshid and some of his comrades among the Iraqi families in a refugee camp, stormed the tent of Murshid and arrested him.”

“Five ISIL members from Caucasus, a Tunisian, a Turkish and another Iraqi militant were also arrested by the army,” the sources said, adding, “Mursihd was wounded on his leg in the army’s attack.”

Iraq’s local sources disclosed on Tuesday that the leader of the ISIL terrorist group, Abu Bakr al-Baghdadi, returned to Iraq from Syria and hid in Nineveh province.

“Al-Baghdadi and a group of ISIL commanders have stealthily returned to Iraq’s Nineveh province,” an unnamed local Iraqi source said.

“Al-Baghdadi has returned to Nineveh province through ISIL-controlled desert roads in Iraq and Syria,” added the source.

The ISIL Leader is running a secret life as his life is at stake more than anyone in the world now. Al-Baghdad’s terrorist group is under massive airstrike by the Syrian, Russian and Iraqi Air Forces all throughout the Western Iraq and Eastern Syria.

While reports earlier this year said the ISIL leader was always on the move between Iraq’s Mosul and Syria’s Raqqa – the self-proclaimed capital of the terrorist group – tips and intel revealed in November that Al-Baghdadi had moved from the Syrian city of Albu Kamal to the Iraqi city of Mosul in Nineveh province. 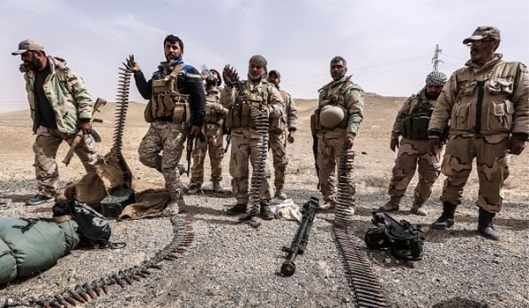 (FNA, 18/5/2016) ~ The Syrian Army troops and popular forces pushed the terrorists of al-Nusra Front and Jeish al-Turkmen back from one more strategic height in the Northeastern parts of the coastal province of Lattakia opening a new gate to the Southern battlefields of Idlib province, military sources said Wednesday.

“The Syrian government forces carried out a fresh round of anti-terrorism offensives at Lattakia-Idlib border and captured the key hilltop of Hadada, which has given significant upper hand to the Syrian army and its allies to have easier and more rapid access to al-Najiyeh and Bdama in the Southwestern part of Idlib province,” the sources said.

“Al-Nusra suffered a heavy death toll and fled the battlefield,” the sources said, adding, “The seizure of the hilltop at the Lattakia border will increase the mobility power of the Syrian army in its imminent operation in Idlib province”.

Reports said earlier this week that the Syrian army continued its advances in Lattakia, and killed a number of non-Syrian Takfiri terrorists in tough battle in the coastal province.

(FNA, 18/5/2016) ~ The Syrian government troops gained the upper-hand against the Takfiri terrorists in Western Ghouta in Damascus countryside by tightening their grip over a strategic highway in the area.

Al-Salam Highway in Western Ghouta is now under the Syrian army’s full control and security has been restored to it.

Scores of terrorists were killed and wounded in heavy clashes with the Syrian government troops.

Meantime, the Syrian army and popular forces inflicted heavy losses and casualties on the Takfiri terrorists in other key provinces across Syria.

The Syrian army continued its advances in Damascus province, and restored full security to a strategic highway in Western Ghouta.

The Western Ghouta in Damascus countryside was the scene of heavy clashes between the Syrian army backed by the air force and the Takfiri terrorists as army managed to bring back full security to Al-Salam highway.

Battlefield sources said the Syrian army took the initiative and in a series of counterattacks on Al-Nusra Front’s military positions managed to move towards Khan al-Sheikh farms and seized control of several areas and restore security to al-Salam highway.

Meantime, the army units annihilated the terrorists’ tunnels in Deir al-Assafir and Zobdeen in Eastern Ghouta.

Earlier on Tuesday, the military sources announced that the Syrian Army troops and popular forces, in a fresh round of joint offensives, hit the terrorist groups’ positions hard in Eastern Ghouta and forced the militants to retreat from a strategic town in the region.

The Syrian army and popular forces are racing towards al-Shaer oilfield in the Eastern part of Homs, military sources said Tuesday, adding that they are only 5km away from the oil-rich region now.

“All territories up to a region that is just 5km away from al-Shaer oilfield have been purged of terrorists,” a field commander said.

He added that hundreds of terrorists have been killed and a major part of ISIL’s military grid in the region has been destroyed in the recent operations in the Eastern parts of Homs that sped up its momentum.

The commander expressed confidence that the strategic oil field will be liberated soon.

Abu Assil, a senior commander of al-Nusra Front terrorist group, was killed in the Syrian fighter jets’ raids on the village of Al-Zara in Hama province.

Abu Sand, a senior commander of Ahrar al-Sham Movement terrorist group, was also killed in the Syrian airstrikes in the town of Hirbnafsa in the same province.

Heavy clashes are currently underway between the Syrian army and terrorist groups near Hirbnafsa town as the Syrian army’s artillery pounded the militants’ positions in the area.

Scores of terrorists were killed and wounded in the Syrian airstrikes in Al-Zara and Hirbnafsa regions.

Local sources disclosed that growing concerns over the imminent operations of the Syrian army troops and their allies have forced the ISIL to extend the “state of emergency” in Raqqa.

“None of the military or non-military members of the ISIL in Raqqa can apply for over a week of vocation, the number of checkpoints and guarding shifts have been increased across the city, operations for digging tunnels and underground hideouts have been accelerated, internet connection in some districts has been banned and most of the command centers of the terrorist group have been transferred to the underground hideouts,” the sources said, adding, “Over 10 reconnaissance flights over Raqqa’s airspace per day have made the ISIL commanders confused and angry.”

The Syrian army units, tipped off by intelligence agents, stropped and seized a truck of the terrorist groups carrying a large cache of Israeli and US-made arms and ammunition in the Southern province of Dara’a.

The Truck was stopped in the Eastern territories of Dara’a and was heading towards Eastern Badiyeh (desert).

200 kg of explosive materials and 32 land mines made in Israel alongside a number US-made TOW anti-tank missiles were in the seized truck.

The predominately Kurdish ‘Syrian Democratic Forces’ (SDF) engaged in heavy fighting with the ISIL in the Southern part of Hasaka province, pinning down the terrorists behind their strongholds with the lowest military movements possible.

The SDF fighters killed several ISIL members in the Southern and Southwestern part of al-Shadadi and Sothern part of Hasaka, while two experienced ISIL terrorists were also killed in mortar attacks of the SDF.

The SDF also seized a huge volume of ammunition and weapons, including mortars 120mm, in its anti-terrorism operations in the region.

The ISIL concentration centers in al-Sina’ah came under the heavy bombardments of the Syrian aircraft and the shelling of artillery units, which not only claimed the lives of several militants but destroyed a number of their military vehicles.

The ISIL terrorists were pinned down behind their position under the heavy shelling of the Syrian Armed Forces.

Reports said on Monday that the Syrian army managed to push back ISIL’s repeated terrorist attacks on the city of Deir Ezzur in recent days.

The ISIL conducted over 50 terrorist attacks on Deir Ezzur city and the Syrian army repulsed them all, battlefield reports said.

The army units managed to thwart all the ISIL attacks and lay siege on the Takfiri terrorists as the Syrian air force cut the terrorists’ supply lines.

Over 200 ISIL terrorists were killed and their military vehicles were destroyed, the report added.

(FNA, 16/5/2016) ~ The Syrian Army and resistance forces, backed up by Syrian air force, have stormed the Takfiri terrorists’ positions in the city of Aleppo in Northern Syria, battlefield sources said.

The army units and the resistance forces managed to push back different Takfiri terrorist groups, including Al-Nusra Front from the building of modern research and Halab al-Jadida region.

Scores of the Takfiri terrorists have been killed and wounded in heavy clashes with the Syrian army and resistance forces, battlefield reports said.

Reports said earlier today that over 400 fresh members of two al-Nusra-affiliated terrorist groups arrived in the Northern province of Aleppo to join their comrades in the fight against the Syrian people.

“300 members of Nouriddeen al-Zinki movement and 100 fighters of Jeish al-Mujahedeen entered the Syrian territories from Bab al-Salama passage and moved towards the town of Kilis in the Northeastern side of the city of Azaz,” the sources said.

Also on Sunday, the Syrian Army’s artillery and missile units and the country’s Air Force opened heavy fire at the terrorist groups’ strongholds in the Southern and Northern battlefields of Aleppo province to pave the ground for the imminent anti-terrorism ground operations in the province, field sources said.

“Gathering centers of Jeish al-Fatah near Khan Touman in South and positions of al-Nusra Front near Handarat camp in North were massively hit by the Syrian artillery and missile units and the Syrians fighter jets’ bombardments,” the sources said, adding, “The attacks inflicted major casualties on the terrorists.”

“The Syrian arm will soon launch its ground operations near Khan Touman and Handarat to root out militancy near the strategic regions,” the sources said.

“The Syrian government forces are resolved to push North towards the strategic passage of Castillo to cut the last supply lines of the terrorists groups to the city of Aleppo,” they went on to say.

(FNA, 16/5/2016) ~ A non-Syrian commander of Harakat Sham al-Islam was killed in the Syrian Army’s missile attack in the Northern part of the coastal province of Lattakia.

Moroccan leader of Harakat Sham al-Islam Azzam al-Mughrabi and his bodyguard Bilal al-Mughrabi were killed in a missile strike of the Syrian army in the Northern battlefield of Lattakia province.

Earlier this month, the Syrian Army and National Defense Forces repelled an attack of the al-Nusra Front on their strongholds in the Northeastern part of Lattakia province, inflicting a heavy death toll on the terrorists.

A 150-member group of al-Nusra terrorists stormed the Syrian government forces’ positions near Kinsibba, but their attacks were repelled by the Syrian soldiers and popular forces.

Under the heavy fire of pro-government forces, al-Nusra fled the battlefield leaving behind at least 25 dead members and many more wounded ones.