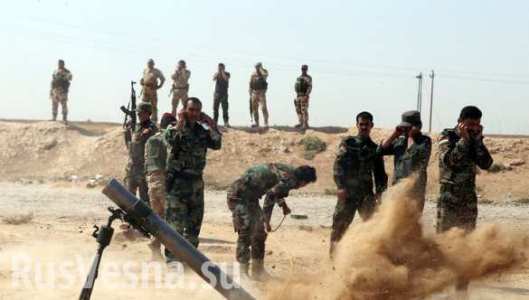 Over the past few days, a sensation spread across the world as American mercenaries, Kurds, and even US Marines were supposedly on the offensive towards ISIS’ “capital” and preparing for a decisive assault on Raqqa.

The Pentagon was clearly the author of this sensation. It was reported that, specifically for the effectiveness of this mass-scale assault, on May 21st the head of the Central Command of the Armed Forces of the USA, General Joseph Votel, secretly visited Syria and discussed plans for the liberation of Raqqa from the terrorists with the “Syrian Democratic Forces” (SDF). This was followed by a statement that the militia’s offensive would be actively supported by the US-led coalition’s airstrikes.

Yesterday, it was reported that the Kurds had already liberated “as many as” 3 villages, and that ISIS terrorists were allegedly retreating under the onslaught of YPG fighters in the northern province of Raqqa.

A source in the Syrian General Staff told Russian Spring’s war correspondent in Syria that the information obtained by intelligence agents and UAV’s clearly indicates that we are dealing with nothing more than a big bluff, since no such “huge force”, as it was dubbed by the media, has been deployed to this front.

“Despite the loud PR campaign, there is no such large-scale offensive on Raqqa. The SDF’s groupings have indeed grown and fighting has intensified, but there is nothing unusual in this. For months already, the Kurds have been fighting with ISIS in Raqqa province, slowly trying to move forward. But there is no indication that they are now, or will soon be, nearing the administrative center of the Muhafazah. At this rate, this could go on for years,” the officer of the Syrian Arab Army said.

The source found it difficult to answer why such a fuss has been made, and suggested that this might have something to do with the US presidential elections or the desire to conceal some other operation or inaction.

The officer also added that the “Syrian Democratic Front” does not possess sufficient forces for a large-scale offensive on ISIS’ “capital,” and, despite media reports that US Marines are deployed near Raqqa, it is obvious that the US is never going to leave hundreds of its soldiers to die in an assault on such a well fortified city.

Information war, PR, and videos from the battle scene

A week ago, international media gladly picked up the sensation of the beginning of the operation to liberate ISIS’ capital, and naturally daily contributed to such informational fuss surrounding this alleged large-scale offensive.

It should be recalled how after the arrival of the head of the US Armed Forces Central Command, even the SDF continued the “strong” assault on the internet, creating a youtube channel called “press center” which apparently was done in order to prove the “seriousness” of their intentions and the scale of events.

Footage was published which was supposed to convince everyone that a large force was being sent to Raqqa. But there is no such large-scale force in the video – only a few ancient Soviet tanks, carts with machine guns, and dozens of poorly equipped Kurds angrily screaming something in their language.

In the following videos, which the media loudly called “the first footage of the fighting in Raqqa’s outskirts,” once again no such “large-scale” combat operations are evident. All that is there are the same ancient tank, cart, and a few dozen fighters, again shouting slogans.

At the time, it was indeed known that in the northern province of Raqqa near the village of Ayn Isa, firefights between Kurdish defense units and ISIS were  ongoing. It was reported that yesterday ISIS militants blew up 3 cars filled with explosives, as a result of which the Kurds suffered casualties.

Meanwhile, the air forces of the American coalition continue to bombard positions of the terrorist grouping in the outskirts of ISIS’ “capital.”

According to Arab media sources, the strikes of the coalition have hit a national hospital, a municipal stadium, and a field hospital in Raqqa.

It has also been reported that fighters of the “Syrian Democratic Front” are continuing to shell the positions of terrorists, and a few militants have been taken prisoner.