The entire world has been subjected to a barrage of war-mongering propaganda against Syria by US Secretary of State John Kerry—but little known is the fact that Kerry’s family name is Kohn and that he is, by Jewish definition and Israel’s own immigration laws, a Khazar-Jew.

This fact puts the war-mongering by Kerry/Kohn into perspective, and also reveals just how deeply the Israeli/Zionist Supremacist tentacles run in the American government.

According to the Israeli Haaretz newspaper, John Kerry’s family are actually Jews whose surname was Kohn.

His paternal grandfather Frederick A. Kerry, was born Fritz Kohn in a town in what today is the Czech Republic before changing his name ahead of his immigration to the United States a century ago.

In 1868, after the death of his first wife, he moved to Bennisch (today called Horni Benesov) and married Mathilde Frankel Kohn. Benedikt and Mathilde Kohn were two of the only 27 Jews living in Bennisch, which is listed as having a total population of 4,200, in 1880.

Soon after Benedikt died in 1876, Mathilde moved to Vienna with her children Ida (7), Friedrich “Fritz” (3) and Otto (newborn).

Fritz and Otto excelled in their studies in Vienna. Both Kohn brothers abandoned their Jewish heritage and converted to Roman Catholicism.

In addition, in 1897, Otto decided to shed the Jewish-sounding name of Kohn. He chose a new name by dropping a pencil on a map. The pencil landed on Ireland’s County Kerry. In 1901, Fritz followed his brother’s example and officially changed his name to Frederick Kerry.

Fred, who worked as an accountant at his uncle’s shoe factory, married Ida Loewe, a Jewish musician from Budapest. Ida was a descendant of Sinai Loew, a brother of Rabbi Judah Loew, the famous Kabbalist, philosopher and Talmudist known as the “Maharal of Prague” who some say invented the character of the Golem.

Kerry in Turkey: US Secretary of State visits tomb of Ataturk

In 1905, the young family immigrated to America. After entering through Ellis Island, the family first lived in Chicago and then settled in Boston. Fred and Ida had two more children in America, Mildred (1910) and Richard (1915).

Fred and Ida and their three children lived in Brookline, where Fred became a prominent man in the shoe business.

In 1921, Fred Kerry, at age 48, entered a Boston hotel and shot himself in the head. Richard was six years old when his father committed suicide. He attended Phillips Academy, Yale University and Harvard Law School. After serving in the U.S. Army Air Corps, Kerry worked in the U.S. Department of State and later the Foreign Service.

* Kerry is not be the first U.S. Secretary of State to have a Jewish family past later in life. In 1997 it was revealed that Secretary of State Madeleine Albright, who was born in Prague,  was actually Jewish—as if people seeing her visage could not tell that.

Albright is more famous for telling the world during a television interview that the deaths of over half a million Iraqi children, caused by a US boycott of medical supplies, was “worth it”. 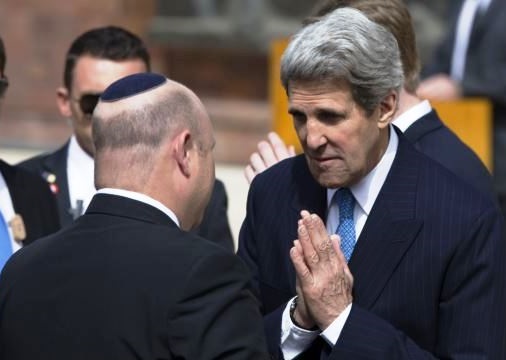 Who is John Kerry, alias Kohn-Lowe?

Who is John Kerry, the USA representative, that while provide weapons, pay and training mercenaries and terrorists at the edge with Syria, says at the same time want to fight them?? Mental dissociation or forked tongue?? No, it is just their nature.

In addition to being brought up in exclusive masonic sect “Skull & Bones“, John Forbes Kerry also belongs to an European family of Marranos Khazar crypto-Jews.

It was discovered in 2003 by Felix Gundacker, a genealogist who worked for the Boston Globe, that Kerry‘s paternal grandparents, who traditionally for centuries belonged to the Austro-Hungarian Jewish community as “Fritz Kohn” and “Ida Löwe“, had changed their surnames to “Frederick and Ida Kerry” in 1900, converted from Judaism to Christianity in 1901 or 1902.

The last name “Kerry”, widely misinterpreted as indicative of Irish descent, was chosen arbitrarily: “According to family legend, Fritz (the elder brother whose name was Otto, who had previously, 1887-1896,” converted “Christian) and another family member opened an atlas at random and dropped a pencil on the map that fell down on County Kerry, Ireland.

It is an established practice, to change his name with another indicating a geographic location (a city, a region, a county) between members of the Jewish community who embrace another religion falsely to better blend in among the population.

Leaving Mödling hometown, a suburb of Vienna where they had lived since 1896, Fred and Ida, grandparents emigrated to the U.S. in 1905, living at first in Chicago and then moved to Brooklyn and Massachusetts in 1915.

USA administration could not have been find a better representative to manipulate the Middle East diplomacy in favor of the Zionist entity, making believe that they want to fight that terrorism who is instead precisely created, backed, supported and feeded by US & Israeli.

People like Kerry have a long history, attitude and secular practice to say one thing while in reality they are thinking and doing another one. They are the well known Marranos on duty over the centuries…

NOTE: information about the Jewish origins of Kerry are verifiable on Wikipedia: en.wikipedia.org/wiki/John_Kerry

1 thought on “Who is John Kerry? A warmonger Khazar-Jew undercover, a dummy at work for the Zionist plans”