The terrorist group Al Nusra Front has killed over 40 people in massive artillery shelling of the Syrian city of Aleppo, the Russian military reported.

The attack devastated a police station and seriously damaged several residential buildings, the report said. Over 40 civilians, security officers and military troops were killed by the shelling while some 100 were injured.

Russia wants to ramp up airstrikes on Al Nusra Front forces in northern Syria, but the US is asking Moscow to postpone it. Washington says moderate rebel groups and terrorist forces mingle among each other and that the US needs more time to pressure the moderates to pull out from Al Nusra-held territories. Russia says the US is making no significant progress on the issue.

Russia and the US are jointly backing the UN-sponsored peace talks between rebel groups and the Syrian government, which are aimed at reaching a stable transition for the war-torn country. The process is hampered by continuing attacks of Al Nusra Front and similar militant groups, which do not observe the truce, which the US and Russia negotiated.

Elsewhere, northwest of Aleppo, the militants gathered some 1,000 fighters and went on the offensive against the government forces, the report said. The attack was launched from a territory designated as held by a ‘moderate’ rebel group.

Reports from the ground said that there are some Turkish servicemen among the attacking fighters, the Russian military added.

Washington has asked Moscow not to conduct airstrikes against al-Nusra Front, which is Al-Qaeda’s branch in Syria, for fear that members of the “moderate opposition” could also be hit, Russian Foreign Minister Sergey Lavrov has reported.

“They [the US] are telling us not to hit it [al-Nusra Front], because there are also ‘normal’ opposition groups [on those territories],” Lavrov said in an interview with local Russian media that was published on the Russian Foreign Ministry’s website.

The minister also stressed that “such opposition groups should leave terrorist positions,” adding that “we have long agreed on that.” Russia first set a deadline for the “moderate” opposition to leave territories occupied by al-Nusra Front extremists, but then agreed to give them more time to withdraw.

In the interview, Lavrov said that Russia believes that taking specific and more effective measures to fight the Islamic State (IS, former ISIS/ISIL) and al-Nusra Front terrorist groups should be the top priority for Russia and the US if the Syrian crisis is to be resolved.

“It is important to provide humanitarian access to the settlements blocked by one side or another, to secure the ceasefire and to prevent its violation, as well as to launch the political process… but, as important as these goals are, terrorism is our common threat, and there should be no doubt about that,” he said, adding that, in the meantime, al-Nusra Front has been attempting to merge with other armed opposition groups.

Lavrov also said that the political process in Syria is being held back by radical opposition groups that refuse to come to the negotiating table and set preconditions for peace talks. He added that it is important to set aside these demands and focus on the fight against terrorism.

The minister also emphasized that Russia and the US are involved in a close and intensive dialog on Syria that includes regular telephone calls between Lavrov and his US counterpart, John Kerry, and a video-conference channel set up between the Russian Center for Reconciliation in Syria located at the Khmeimim airbase in Latakia and the US base in the Jordanian capital of Amman, as well as a joint US-Russian center in Geneva.

Lavrov had held a telephone conversation with US Secretary of State John Kerry at the initiative of the US side earlier the same day, the Russian Foreign Ministry said in a statement.

The two ministers discussed “the fight against ISIS and the need to urgently distance the moderate opposition from the Jabhat al-Nusra group, as well as efforts to cut off the flow of weapons and militants coming from abroad to beef up terrorist organizations,” the statement said.

In the meantime, Kerry, who is in Paris, told journalists that he had discussed the upsurge in violence in Syria during the phone call with Lavrov, explaining that the two had worked specifically on “ways to try to strengthen the enforcement and accountability for this cessation,” AP reported.

In the meantime, the US State Department said that Washington has asked Russia to be “more careful” in targeting its airstrikes against al-Nusra Front, as hitting civilians or opposition groups while attacking the jihadists could eventually give more support to the terrorist groups.

“[The US State] Secretary conveyed to Russia and the Assad regime that they need to carefully distinguish between these terrorist groups operating on the ground and those parties to the cessation of hostilities,” US State Department Deputy Spokesman Mark Toner said during a briefing on Friday, adding that the US agrees that IS and al-Nusra Front “pose a real threat to the security on the ground in Syria.”

US trying to play both sides to continue Syrian conflict

By designating militants who share the same areas and positions with terrorists as “moderate opposition,” the US is actually providing the terrorists with a safe haven, Henningsen reasoned. The terrorist groups are profiting from such neighborly relations the same way they make use of civilians.

“The classification of moderate rebels is a type of the human shield,” he said.

Hennigsen claims that the lack of a clear signal to the rebel groups coming from Washington is the result of a deliberate strategic choice made by the US government, which wants the military conflict to drag on.

“All this talk of co-mingling, this is all double-speak,” he noted, adding that Washington is “trying to play both sides this to continue this conflict” and has no intention of actually resolving the issue. 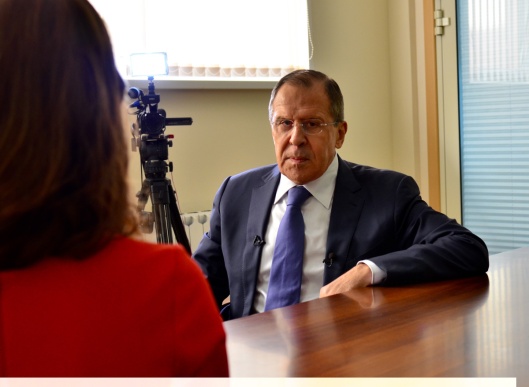 Question: How is the Russia-US dialogue on Syria going?

Sergey Lavrov: It is fairly intensive. I can’t say that the intensity of our meetings translates into the number of specific agreements, because the situation is complex. The biggest snag is that we are convinced of the need to take concrete, more effective and stronger action against ISIS and Jabhat al-Nusra. We believe that everything else is of secondary importance. To be sure, it is important to ensure humanitarian access to all locations that are blocked by either party, to maintain the ceasefire, and to deal with violations. It is important to launch a political process, which the radical opposition is impeding by refusing to sit at the negotiating table and laying out preliminary requirements. As important as these things are, terrorism represents a common threat, and there should be no doubt about it. Most of our Western partners acknowledge in private conversations that there should be no excuses when it comes to defeating ISIS and Jabhat al-Nusra, which, to make matters worse, is trying to link up with other groups. We are told that we should not attack them, because there’s also the “normal” opposition there. However, this part of the opposition should withdraw from the terrorist positions, and this has long since been agreed.

Our American partners are still leaning towards those who put forward preconditions. Today I spoke with US State Secretary Kerry again. It was, I believe, our 34th conversation since January. We discuss these matters in detail. In addition, there’s a Russian-American video conferencing channel at our base in Hmeymim. We have a communication channel with the US representatives sitting in the Jordanian capital. They talk on an almost daily basis. As you may be aware, a joint Russian-American Centre for Syria Truce Monitoring was set up in Geneva.

So, the communications infrastructure is in place. Most importantly, we should try to get past the preconditions, which need to be put on the back burner, and get down to fighting terrorists.

Question: Are there any concerns that Kiev might take unilateral steps towards political reform without agreeing them with Donbass?

Sergey Lavrov: There were rumours a few days ago that a package of documents may be submitted to Ukraine’s Verkhovna Rada. That is to say, they will appear to meet the requirements of the Minsk agreements, but in fact these documents, unless they are agreed upon with Donbass, will undermine the Minsk agreements.

We asked our Normandy format partners – the French and the Germans – to prevent this from happening, because it could create a major additional impediment to implementing the Minsk agreements. They clearly stipulate that the constitutional reform, the law on local elections, and the law on the special status of Donbass must be coordinated with the representatives of Lugansk and Donetsk. The next step should include a complete amnesty for the participants of these events on both sides – exactly as was done with regard to the participants of the Maidan protests in February 2014. That sums up the current situation.

Question: Will we meet more often now that a branch of MGIMO University opened in Odintsovo? Can we hope for a longer and more in-depth interview with you?

Sergey Lavrov: Let’s make a deal. I would certainly be willing to. It’s important. A branch doesn’t have to open in Odintsovo for that to happen. However, once the branch opens, I’m convinced that the Foreign Ministry staff, my deputies, directors of departments and especially former diplomats will gladly accept an invitation to carry out additional functions, seminars, lectures, or round table discussions. We will see each other more often, no doubt about it.

Military reinforcements for mercenary-terrorists: column of vehicles coming from Turkey to Syria spotted by Russian drone

Over 40,000 foreign militants from 100 countries
fighting in Syria

2 thoughts on “The true face of the U.S. rogue state: 40 people killed by Al-Nusra shelling on Aleppo residential areas, while the American regime asks Russia not to target Al-Qaeda gangs in Syria [Sergey Lavrov and Russian Military Reports]”