Kurdish fighters allegedly backed by the US, have crossed the Euphrates River in Syria and have moved against fighters from the self-proclaimed “Islamic State” (ISIS) holding the city of Manbij. The city is about 20 miles from Jarabulus, another Syrian city located right on the Syrian-Turkish border. Jarabulus too is held by ISIS.

The initial push toward Manbij came from the Tishrin Dam in the south, however, another front was opened up and is hooking around the city’s north – successfully cutting off the city and its ISIS defenders from roads leading to the Turkish border – including Route 216 running between Manbij and Jarabulus.

Planning an assault on an urban center requires that an attacking force cut off city defenders from their logistical routes. Doing so prevents the enemy from fleeing and regrouping, but also diminishes the enemy’s fighting capacity during the assault. It is clear that the fighters moving in on ISIS in Manbij have determined that Jarabulus and Turkey just beyond the border, constitutes the source of ISIS’ fighting capacity.

Jarabulus is increasingly being referred to across the Western media as the “last ISIS border-crossing point into Turkey.” A 2015 article written by the Guardian’s Jonathan Steele titled, “The Syrian Kurds Are Winning!,” would explain that (emphasis added):

In July of this year the YPG, again with the aid of US airpower, drove ISIS out of Tal Abyad, another town on the border with Turkey. This meant ISIS had lost two of the three crossing points from Turkey through which it could bring foreign volunteers, finance, and weaponry to strengthen the jihad.

Idriss Nassan, the Kurdish spokesperson of the Kobanî canton, told me that the YPG now plans to liberate the last ISIS border-crossing point into Turkey at the town of Jarabulus.

Steeles’ article gives the impression that the US was actually trying to stop ISIS by helping the Kurds wage war inside of Syria. However Steele, for whatever reason, never addresses his own implications that ISIS is literally being reinforced from Turkey – a NATO-member since the 1950’s which hosts a US Air Force base at Incirlik, and who has allowed US, British, French, and Persian Gulf state intelligence agencies and special forces to operate along its border with Syria with impunity since the conflict began. 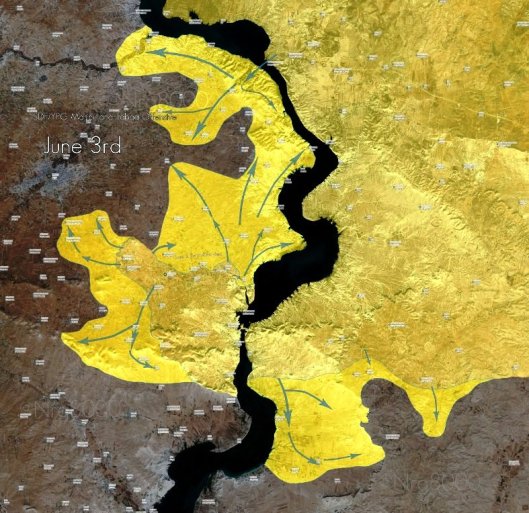 Image: The northern hook has since completely cut off the city of Manbij (upper-left) from ISIS-held Jarabulus and the Turkish border in the north.

The Foreign Minister of Turkey admits that ISIS forces – fighters, weapons, and equipment – are pouring out of Turkey’s own territory “bound for Raqqa,” but never explains how the most notorious terrorist organization of the 21st century could move enough men and materiel through a NATO-member state to wage an entire war with, without being stopped before reaching Syria. Also not explained is where ISIS is procuring the weapons that it is moving through Turkey.

It is a reality that directly and damningly implicates Turkey and its allies as state sponsors of terrorism, and calls into question both the legitimacy and relevance of NATO itself. At the very least – NATO is exposed as a military alliance so impotent that it cannot even secure its own territory from being used as a springboard for full-scale ISIS military operations.

It should be noted that as a “collective act” by NATO, at one point in the conflict, the United States and Germany would even place Patriot missile systems along the Turkish-Syrian border to discourage Syrian aviation from approaching too close – a strategic reality that did not shift until Russia began its own direct military intervention in the conflict on Damascus’ behalf, as Defense News reported at the time.

In retrospect – it appears that both the US and Turkey were complicit in ensuring Syrian efforts to interdict terrorists including ISIS were ineffective – establishing what was essentially a defacto buffer zone inhabited by among other groups – Al Qaeda’s Al Nusra Front and ISIS itself. 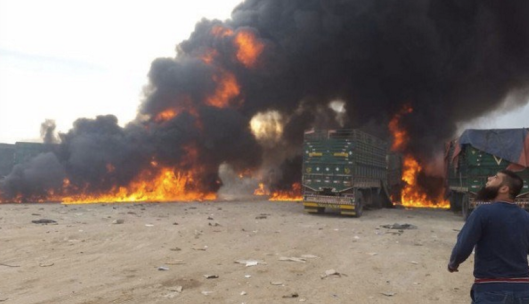 Image: Russian airstrikes ended the impunity with which ISIS supply networks moved from Turkey into Syria.

Russia’s entry into the war and its subsequent operations directly along the Syrian-Turkish border disrupted ISIS’ logistical support from NATO-territory and has been the primary factor leading to ISIS’ weakening within Syria.

Time is Up for the West’s Narrative

With the Western media itself now admitting ISIS is crossing into Syria from Turkey – even without explaining the obvious context and implications this has for both Turkey and NATO  – it will become quickly apparent to all that more should be done by Turkey and NATO to contain ISIS within Turkey itself, rather than beyond Turkey’s border with Syria.

For the United States in particular to have substantial military assets located in Turkey for its Syrian operations, but appear oblivious to the ISIS threat passing by its own troops, intelligence officers, and military trainers and advisers, will become an act even the most naive Americans and Europeans will find difficult to believe.

In the meantime, efforts to continue securing Syria’s borders, north and south, must be made in order to confront the West’s proxies on the battlefield. Meanwhile, across information space, efforts must be made to continue raising awareness that a war fought by fighters moving from one country into another is not a “civil war,” it is a foreign invasion – and those nations participating in it along the invaded nation’s borders must be held accountable.

1 thought on “NATO exposed as Daesh springboard into Syria”