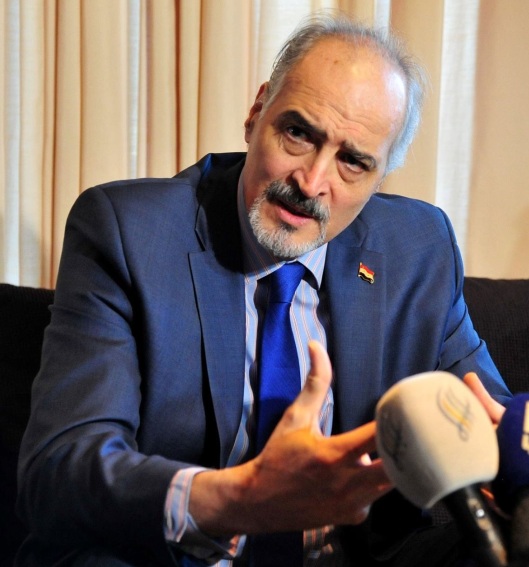 Syria’s Permanent Representative to the UN Bashar al-Jaafari criticized the UN meetings on the humanitarian situation in Syria as being politicized and not aimed at helping the Syrian people.

During a session to listen to the report of the UN Undersecretary-General on the humanitarian situation in Syria on Tuesday, al-Jaafari said the repeated official and non-official meetings and urgent updates held recently on almost a weekly basis, with or without brokers and in many times of no use, have been pointless as they were not aimed at helping the Syrian people to get out of the crisis in an objective way and in compliance with the rules of the international law and the resolution no. 46/182 on providing emergency humanitarian assistance.

It is not that Syria doesn’t want such meetings to take place, but rather, “we want the objective of these meetings to be providing real help in solving the crisis in Syria in an honest and effective way away from any politicization that has become flagrant,” said al-Jaafari.

He added that “such meetings should not be used by governments of states that are responsible for the shedding of the Syrians’ blood and the sweeping cross-border terrorism as a means to demonize the Syrian government and exploit the humanitarian situation to exert pressure on it”.

He wondered how such meetings could be called for by countries that are fully involved in supporting terrorism in Syria and have been responsible for creating the crisis.

Al-Jaafari found it odd that Saudi Arabia should have called for holding today’s meeting to listen to updates on the humanitarian and political situation in Syria at a time when it has been threatening the UN Secretary General and used money to blackmail him so that for its name to be removed from the list attached to the Secretary General’s report on children and armed conflicts.

He said Saudi Arabia that has been using terrorism as a tool to realize its political agendas and was the source of the Takfiri terrorist Wahhabi thinking, has the worst human rights record as it has been shelling and besieging civilians in Yemen for more than a year now.

The Syrian Ambassador criticized the wrong way in which the humanitarian crisis in Syria is being dealt with as the main causes of the crisis are being overlooked, citing in particular the foreign-backed armed terrorist groups and the coercive unilateral measures imposed by the European Union and the US on the Syrian people.

The humanitarian situation won’t improve unless this wrong approach followed by those governments is dropped, said al-Jaafari, explaining that the crisis cannot be solved only through financial contributions.

He also referred to Israel’s continued support to the terrorist groups, including al-Nusra Front, in the disengagement zone in the occupied Syrian Golan that is being totally ignored.

Al-Jaafari reiterated that the Syrian government is the most keen to provide all forms of humanitarian support and assistance to all the affected Syrians wherever they are on the Syrian soil.

The Syrian government has been committed to providing this kind of support and has been cooperating and coordinating with the UN and other international organizations working in Syria to achieve that end, he stressed.

Al-Jaafari clarified that contrary to the media claims saying that the Syrian government has been hindering humanitarian assistance, it has recently approved 16 out of 17 UN requests to allow access to joint humanitarian convoys into hotspot areas in the country in the framework of June plan alone.