Foreign and Expatriates Ministry sent on Wednesday two identical letters to the UN Secretary General and Head of the Security Council on the terrorists’ slaughtering of a Palestinian boy in Aleppo.

A videotape emerged online on Tuesday showing terrorists of the so-called “Nour al-Din al-Zenki Movement” cutting off the head of a 12-year-old Palestinian child in a camp hosting Palestinian refugees near Aleppo city.

In its letters, the Ministry said the Syrian government demands condemnations from the UN Secretary General and Head of the Security Council of all the crimes being committed against the Syrian citizens and the residents of the Palestinian camps in Syria.

The letters added that terrorists of “Nour al-Din al-Zenki Movement” which is classified by some states as “armed moderate opposition” slaughtered last Tuesday in cold blood the 12-year-old Palestinian child publicly and in front of a crowd of people and cameras.

The ministry pointed out that the videotapes that were photographed by the terrorists showed the boy, who is wearing civilian clothes, surrounded by a group of terrorists inside the pickup truck and on one of his bare hands traces of bruises and wounds.

Later, the video shows one of the gunmen speaking and claiming that the child is a fighter in the “al-Quds Palestinian Brigade” and that he has been captured during the current battles in Handarat Camp to the north of Aleppo.

The ministry added that the citizens’ witnesses confirmed that the child is Palestinian and called Abdullah Essa and he is one of the remaining residents in the Handarat Camp for Palestinian refugees in Aleppo province, where the terrorists captured him and presented him as a fighter in al-Quds Brigade, a matter denied by the officials of the Brigade in media outlets.

The letters went on to say that the video showed one of the butchers of “Nour al-Din al-Zenki Movement” slitting the neck of the child and then cutting off his head with shouts and cheers from the rest of the criminal terrorists.

The ministry affirmed that the government of the Syrian Arab Republic condemns the immoral and inhuman crime committed by Nour al-Din al-Zenki Movement, backed by the regimes in Riyadh, Doha, Ankara and the US administration and other Western countries which still name these groups as “moderate opposition groups” and still support them with money and weapons despite of their crimes against civilians like Jaish al-Fatah, Jabhat al-Nusra, Nour al-Din al-Zenki Movement, Jaish al-Islam and many others. 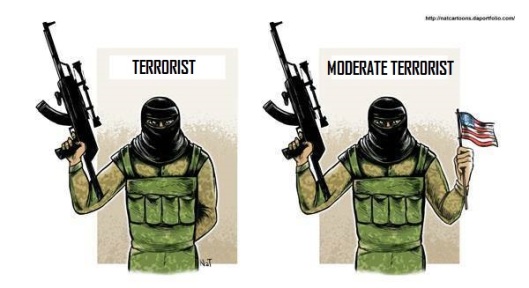 The Foreign Ministry added that the government of Syrian Arab Republic calls on the UN to condemn this heinous crime perpetrated against an innocent child and demands UN Security Council to assume its responsibility in preserving international peace and security through taking punitive measures against states and regimes that support and fund terrorism, and to prevent them from supporting terrorism and obliging them to abide by and implement UN relevant resolutions No. 2170, 2178, 2199 and 2253.