(FNA) ~ Hundreds of family members of the Saudi soldiers and officers fighting in Yemen war gathered in front of al-Yamama palace in Riyadh to call for returning their beloved ones from unjustified aggression.

According to the Yemeni Press news website, hundreds of Saudi people called for ending the country’s war against Yemen.

Eye-witnesses and foreign journalists reported that the protesters gathered in front of al-Yamama palace and asked for the return of their sons from Yemen battlefields.

The Saudi security forces present on the scene seized all cell phones of the protestors, anticipating that they would take photos and record the gathering to upload them onto social media. Tens of protesters were arrested and taken to an unknown place.

A foreign media source who called for anonymity said that the protestors chanted slogans against the Saudi regime’s war in Yemen, including “stop killing our children” and “Saudi King Salman bin Abdulaziz should account for shedding the blood of our youth”.

The protest rally was held as the Yemeni forces’ ballistic missile attack killed and wounded tens of Saudi forces in Najran province in the Southern parts of the kingdom late July.

Also late July, the Saudi interior ministry in a statement announced that nearly half a dozen of the kingdom’s soldiers and senior officers were killed in clashes with the Yemeni army and popular forces near the border with Yemen.

“Five Saudi soldiers have been killed in battle with the Yemeni forces in Najran province as two senior Saudi officers were also killed in tough battle in Jizan province,” the Saudi interior ministry’s statement said. 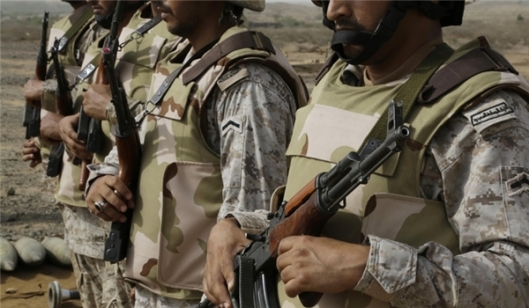 (FNA) ~ The Saudi army is trying hard to prevent the Yemeni army and popular forces from making further advance deep into the kingdom.

The move by the Saudi army comes as the Yemeni forces have intensified their military operations against the Riyadh government troops in Jizan province of Saudi Arabia.

Earlier on Wednesday, Saudi whistle-blower Mujtahid, who is believed to be a member of or have a well-connected source in the royal family, disclosed that the Yemeni forces have made considerable military gains in Jizan province.

In a relevant development on Monday, the Yemeni army pounded a strategic military base in the kingdom’s Jizan province with home-made missiles.

Also on Monday, the Yemeni missile units pounded and destroyed a strategic Saudi military base in the kingdom’s Najran province.

The Saudis’ Rajla military base in Najran was destroyed by the Yemeni army’s home-made ballistic Zalzal-3 missile which was unveiled in July.

The attack also destroyed a number of tanks and military vehicles belonging to the Saudi forces, al-Masirah reported.

The Yemeni army has fired 13 ballistic missiles towards the Saudi military positions in Najran province since the beginning of July.

Last week, the Yemeni forces continued their attacks against the Saudi troops in the kingdom’s Southern parts, and killed several senior Saudi officers, including a top commander of the Saudi army’s 84th Division in the same area.

“The Yemeni army and popular forces fired missiles at Saudi tanks in Najran province, and killed the armored unit commander of the Saudi Army’s 84th Division who was also deputy commander of Rajla military base along with other senior Saudi forces,” the Arabic-language media outlets quoted an unnamed military source as saying last Monday.

Also last Monday, the Yemeni army, backed by popular forces, fired a ballistic missile at a Saudi military base in the kingdom’s Jizan province in retaliation for Riyadh’s relentless attacks on Yemen’s civilians.

The Yemeni Tochka missile precisely hit the Saudi military base in the kingdom’s Ahad al-Mosareheh region in Jizan province.

The Saudi forces sustained heavy losses and casualties in the Yemen missile strike.