The Khazarians are not hiding it anymore. In their frustration over the effective ongoing global active resistance against their genocidal plans throughout the Middle East and elsewhere around the globe, they could not contain their evil desires anymore.

They just want to have Hillary Clinton in power at all cost, embed themselves within her government, and kill all their enemies abroad as they are already doing at home.

Yesterday, Wikileaks supporters are offering whoever $20,000 for the information surrounding the murder of DNC whistleblower Seth Rich.

The whistleblowing organization Wikileaks wants to catch those responsible for the murder of Democratic National Committee (DNC) staffer Seth Rich and are now offering a $20,000 reward for information.

The group’s co-founder Julian Assange suggested on Dutch television that if Rich is the source of the 20,000 emails exposing the party’s sabotage of the Bernie Sanders campaign in favor of Hillary Clinton, he may have been killed over it.

However, when asked if Rich was a Wikileaks source, Assange refused to comment, merely saying they were investigating the circumstances surrounding his murder.

This is what the ex-CIA Acting Director Michael Morell have in mind. He just hate the Russians and the Iranians so much.

Christoph Germann @newgreatgame
“You want to covertly(!) tell the moderate opposition to go after the Russians & the Iranians who are on the ground”
https://charlierose.com/videos/28566

… while he and his fellow sociopath love each other.

Michael Morell on Charlie Rose said ‘Hillary is the toughest in the room’ more pro-neocon shade throwing at Obama cc@SamSacks @samknight1
7:36 AM – 9 Aug 2016

Michael Tracey @mtracey
You see, Michael Morell is a man of virtue: he calls for death and destruction in proper politesse. Heaven forbid he crack a rude joke.
2:48 PM – 9 Aug 2016

Former acting CIA Director Michael Morell said in an interview Monday that U.S. policy in Syria should be to make Iran and Russia “pay a price” by arming local groups and instructing them to kill Iranian and Russian personnel in the country.

Morell was appearing on the Charlie Rose show on PBS in the wake of his publicly endorsing Hillary Clinton on the New York Timesopinion pages.

Morell said the killing of Russians and Iranians should be undertaken “covertly, so you don’t tell the world about it, you don’t stand up at the Pentagon and say ‘we did this.’ But you make sure they know it in Moscow and Tehran.”

He compared his proposal to American support for groups that targeted Russian forces in Afghanistan during the 1980’s — efforts that later helped incubate al Qaeda. He seemed unconcerned about how other parties might respond to such actions, beyond speculating that they might provide leverage for future negotiations.

If put into effect, Morell’s plans would entail a massive escalation of American covert military involvement in Syria that would bring the United States much closer to direct confrontation with Russia and Iran.

Morell’s endorsement of Clinton was quickly seen as a sign that he was interested in a role in a possible Clinton administration. He wrote that Clinton would be a “highly qualified commander in chief” and a “strong proponent of a more aggressive approach” to the conflict in Syria.

Morell told Rose that he had not discussed his proposal to kill Russian and Iranian personnel in Syria with Clinton, though he believed she was supportive of efforts to gain “diplomatic leverage.”

After leaving the CIA in 2013, Morell authored a memoir entitled “The Great War of Our Time.” The book was widely criticized for defending detainee torture in the post-9/11 era. Morell was also a co-author of a “rebuttal” to the Senate Intelligence Committee torture report.

Last week, CBS announced that Morell had left his role as a network news analyst so that he could begin publicly supporting Clinton’s run. During his interview with Rose, Morell continued to heap praise on Clinton’s perspective on U.S. relations with Syria, Russia and Iran.

“She will deliver on the most important duty of a president—keeping our nation safe.” —Michael Morell on Hillary https://t.co/zmI3BOCH9Y
— Hillary Clinton (@HillaryClinton) August 7, 2016

In other circles, Morell’s op-ed generated criticism of his role in defending torture, and the Times‘s failure to identify his employment at a consulting firm with strong ties to Clinton:

The Charlie Rose interview led one blogger to further update the title of Morell’s op-ed:

“I ran the CIA now I’m endorsing Hillary Clinton and I want Hillary to kill lots of Russians and Iranians in Syria”:https://t.co/Ka7oSby9kk
— Christoph Germann (@newgreatgame) August 9, 2016 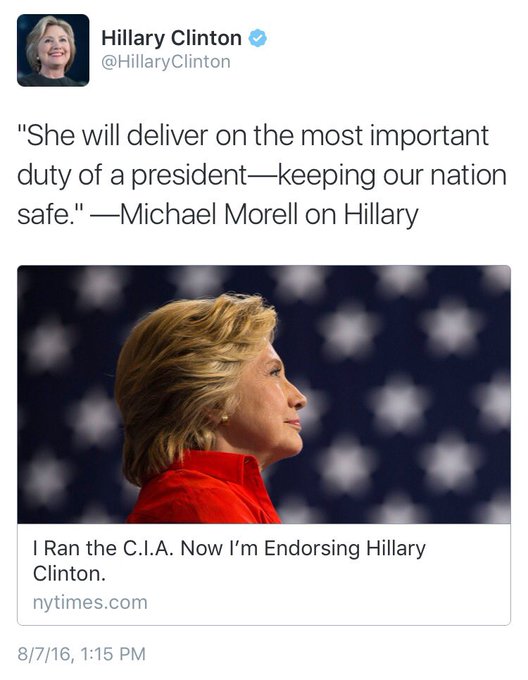 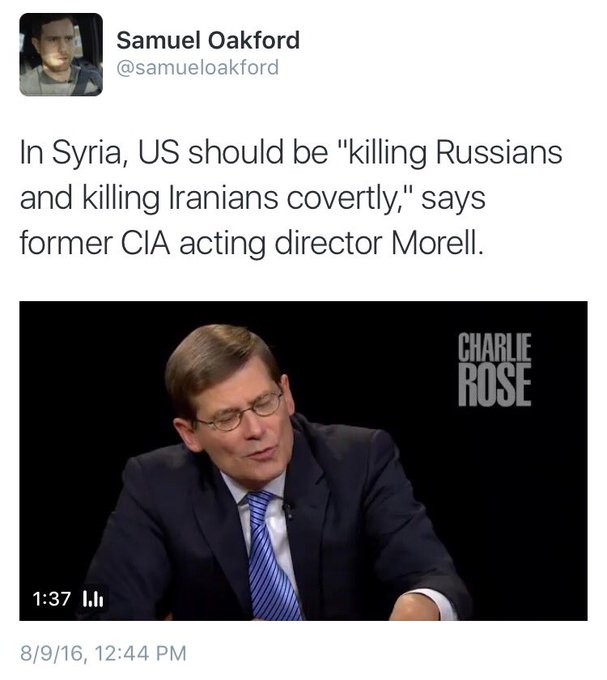 Last year, Morrell apologized to “every American” and finally owned up to the “mistakes” made by the CIA in Iraq, where over 4,000 US soldiers and at least 250,000 Iraqi civilians have been killed since the 2003 US invasion.

But after he said sorry, he’s now positioning himself for the offensive as if Hillary Clinton is really taking over the White House by next year.

When that happens, the Mena Drug & Arms Trafficking Scandal would just be a kid’s play.

They have to do something about the unexplained $6.5 trillion Pentagon expenses, too.

Aside from the fiat monetary scam and bloodsoaked petrodollar, another significant source of funds for the Nazionist Khazarian Mafia is the “healthcare” industry which registered a whopping $3.09 trillion in 2014, and is projected to soar to $3.57 trillion in 2017, in the US alone. We believe that this is just a conservative figure.

(Russia Today) ~ Former CIA deputy director Michael Morell, who supports Hillary Clinton and insists that Donald Trump is being manipulated by Russian President Vladimir Putin, said that Russians and Iranians in Syria should be killed covertly to “pay the price.”

The top CIA official, who twice served as the acting director of the agency, and worked with Clinton while she was secretary of state, told PBS host Charlie Rose that Iran and Russia should“pay a big price” in Syria – and by that he meant killing them.

When asked if that meant killing Russians and Iranians, Morell fully agreed, qualifying the answer with “covertly.”

“Tell the world about it, right?” he went on. “You don’t stand up at the Pentagon and say ‘we did this,’ but you make sure they know it in Moscow and Tehran.”

Referring to the US-backed rebels in Syria, Morell said he wanted Washington to support them in more aggressive actions, not only against Bashar Assad’s government, but against Iranians and Russians.

Morrell then went on a diatribe about how the US should “scare” Assad, including going after his national guard and “bombing his offices in the middle of the night.”

The former acting director of the CIA publicly endorsed Hillary Clinton last week through an opinion piece in the New York Times, praising her qualifications as commander-in-chief and calling her rival Donald Trump a threat to national security.

After he retired from the CIA in August 2013, Morrell took a job at Beacon Global Strategies, a Washington, DC consultancy founded by Clinton aides Philippe Reines and Andrew Shapiro. There he worked with Leon Panetta, another Clinton aide and his predecessor at the helm of the CIA, who also spoke in support of Clinton at the Democratic convention in Philadelphia last month.

Last year, Morrell apologized to “every American” and finally owned up to the “mistakes” made by the CIA in Iraq, where over 4,000 US soldiers and at least 250,000 Iraqi civilians have been killed since the 2003 US invasion.