In a video released by the Russian security service on Friday, a Ukrainian infiltrator tells investigators that he eyed the central bus station and airport in Crimea’s Simferopol for bomb attacks.

More planned terrorist attacks in Crimea have been revealed by the Federal Security Service (FSB) after it raided a Ukrainian infiltrator group on the peninsula over the weekend. One member of the FSB and one infiltrator died in the following shootout.

FSB has now released the video of the questioning of another infiltrator who was arrested seven days prior to the weekend’s operation.

The man, Ridvan Suleymanov, told investigators he was “aimed at choosing places for planting of explosive devices and terrorist acts,” at the bus station and airport in Simferopol, the capital city of Crimea. In the video he also admitted that “civilians could die” as a result.

Suleymanov said he was recruited in Ukraine by the country’s Main Directorate of Intelligence of the Ministry of Defense (HUR MOU) in October last year. Given the codename “Yuzef,” he was tasked with “gathering military information” in Crimea and sending it to Kiev. The infiltrator then moved to the peninsula, where he applied for a Russian passport and a job.

In July 2016 Suleymanov got the order from his contact, named as Pavel Nikolayevich, to find suitable places at Simferopol’s airport and bus station to plant Improvised Explosive Devices (IEDs). “Large numbers of people” as well as “easy planting possibility” were among the criteria for the right spot, Suleymanov told investigators.

“I also had to make a fake explosive device, plant it in the selected location, call the police and stay at the airport watching the actions of law enforcers,” the infiltrator went on to say. He added that he had to take pictures of the police response and send them to Pavel Nikolayevich.

On July 29 Suleymanov arrived in Simferopol and after finding a suitable place sent a respective message to his contact person. A day later he planted a fake IED, found a place to monitor the situation and contacted Pavel Nikolayevich for further instructions. Suleymanov was ordered to immediately start a conference chat and call the police.

During the conference call he heard a voice saying, “I am Ahmet Karimov, today with our brothers we are going to go from the small to the large jihad. Exactly at 12 am [we’ll] blow up the central airport of Simferopol as well as the central bus stations of Simferopol, Yalta, Sevastopol and the Kerch crossing.”

After taking five pictures, Suleymanov was arrested by Russian law enforcers. In the video released Friday, the man said it “was clear to him” that more potential attacks by Ukrainian intelligence could follow in Crimea.

Meanwhile RIA, citing own sources, said Russian intelligence had identified a mastermind of the planned attacks by the group of Ukrainian infiltrators who were captured over the weekend.

“The organizer of the planned sabotage acts on the territory of Crimea was the chief of intelligence of the 37th battalion of the 56th brigade of the Main Directorate of Intelligence of the Ukrainian Ministry of Defense captain Vladimir Serdyuk,” the agency said, quoting its source.

In the aftermath of the foiled plot officials in Crimea have tightened the security near major infrastructure objects, in crowded places, and on the Russian-Ukrainian border.

Russia’s most advanced to date anti-aircraft defense system S-400 Triumph has been delivered to a surface-to-air missile (SAM) regiment in Crimea. The military will first deploy their newly received hardware in a training exercise ongoing in the region. 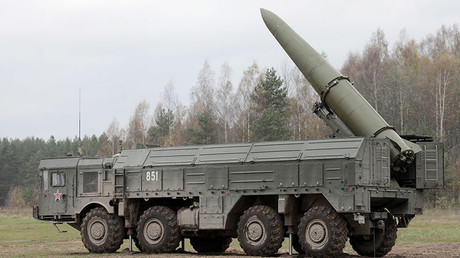 Plans of the S-400 deployment to Crimea were announced by the Russian Defense Ministry in July. After the air defense complex was successfully used in field firing at a training target missile in the Astrakhan region in southern Russia, it was delivered to the peninsula, military officials announced on Friday.

After the regiment in Crimea completes its training with the S-400, it will take part in Kavkaz-2016 military drills, currently happening at military bases in Russia’s southern military command region and in the waters of the Black Sea.

Including a set of radars, missile launchers and command posts, the system is an upgrade of the S-300 missile system, which are also deployed in Crimea, to ensure protection from possible airstrikes or cruise missile attacks.

Manufactured by Russian producer Almaz Antey and introduced into service in 2007, the cutting-edge SAM system is employed to ensure air defense using long- and medium-range missiles that can hit both aerial and land targets at ranges up to 400 kilometers (248 miles).

The Defense Ministry has previously announced that 16 regiments of the Russian Army will be equipped with the S-400 by the end of the year, TASS reported.

The S-400 missile system was also deployed in Syria last year. The Russian Air Force base in Latakia was reinforced with the SAM system following the downing of a Russian Su-24 plane by a Turkish F-16 fighter jet near the Turkish-Syrian border. The Su-24 pilot who was taking part in Moscow’s anti-terrorist campaign in the region died in the incident.

Over 2015, the hardware has also been deployed to Russia’s Arctic region, north of the Polar Circle.