Aside from the standard list of lies which US-led ‘Coalition’ representatives regularly spout regarding their so-called ‘moderate rebels’ (terrorists) in Syria, there is another key lie which is only barely holding Washington and London’s house of cards together – that is the idea that some of these ‘moderate rebels’ (terrorists) are somehow engaged in the grand crusade against ISIS/ISIL/IS/Daesh (all terms apply equally to ISIS). For all intents and purposes, this spurious western claim is a lie – one of many lies about Syria constantly being fed to the public by western politicians and media functionaries.

The reality, outside of the Washington-London “classified” reality bubble is that these US-NATO-GCC-backed ‘moderate rebels’ (terrorists) have, more or less, the exact same objectives as ISIS,and unless they are fighting over control over money or illicit black markets, their shared collective goal is the overthrow of the Syrian government in Damascus via ‘regime change’ and an end to a secular, multi-religious nation-state of Syria. Put simply: their flag designs and online brands may differ, but they are effectively one in the same. So it only stands to reason that if the US-NATO allies are wholeheartedly backing this rebel-terrorist ‘armed opposition’ conclave, then despite their highfalutin rhetoric, US-NATO allies are also supporting an end to the secular multi-religious nation-state in Syria.

Furthermore, as western-backed terrorist rebels share the same objectives as ISIS, then by extension – this also means that the US-NATO allies share the exact same goals as ISIS. Yes, that’s right: US-NATO forces have positioned themselves as natural allies of ISIS, alongside the ‘moderate rebel’ terrorists who have already received billions in western taxpayer-funded arms, equipment, training, intelligence support and cash.

The entire US-NATO justification for having thousands of special forces and military trainers currently deployed in Turkey, Jordan and inside Syria – is that the NATO member states are training these ‘moderate rebels’ (terrorists) to fight against ISIS.” Seeing that this is not actually happening, and thus can be written off as another major lie and key propaganda line being disseminated by Washington and its NATO functionaries – then the US and its NATO partners are effectively undermining the war against the terrorists – and conveniently extending the Syrian Conflict in the process.

Base on this, the obvious conclusion would be for the US and NATO forces to cease all military activities in and around Syria – and leave the fighting against terrorist groups… to those entities legally inside Syria of who we can safely say are definitely notsupporting or enabling jihadi terrorists groups in the region and those entities are: the Syrian government forces, the Russian military, Iranian forces and the Hezbollah militia.

Add to this, the disconcerting fact that ISIS terrorists in both Syria and Iraq, as well as in Afghanistan – are using United States-issued weapons and equipment. Despite categorical US denials, this is becoming an all too familiar occurrence.

It shouldn’t be complicated, and yet, this is how Washington and London like to operate – within a fog of maximum confusion, and of Gangs and Counter-gangs, while also cynically changing the names of known terrorist groups the US-led ‘Coalition’ has been supporting both militarily and financially for at least the past four years, and also by using its corporate media assets like CNN who are now trying and rehabilitate jihadist terrorist groups for these fighters to gain favor from western audiences.

Does anyone still believe that “the ‘moderate rebels’ are fighting ISIS,” like Washington has insisted for years now? According to the evidence, that’s just another lie – and here is even more damning proof that it’s a lie…

US-backed ‘rebels’, under the watchful supervision of US drones, have just let ISIS walk away… 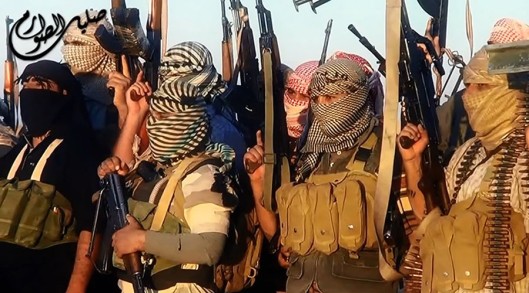 Several hundred vehicles containing 100 to 200 Islamic State fighters were given safe passage by US-based forces, out of the northern Syrian city of Manbij, after surrendering their weapons, according to defense officials.

US Army Col. Carver, a spokesman for the US-led coalition fighters, told Pentagon reporters the decision to let Islamic State (IS, formerly ISIS/ISIL) convoys leave the city was made by commanders of the Syrian Democratic Force.

Col. Carver described how IS had civilians in each of the vehicles, and the military wanted to avoid casualties. He didn’t know how many of the civilians had been in the cars voluntarily but said some were likely hostages.

The 100 to 200 fighters left the city of Manbij last Friday under watch of coalition drones to ensure the militants didn’t regroup and try to return to the city.

It was the first such agreement with the terror group. IS fighters were allegedly using civilians as human shields to escape.

“They kept throwing civilians to basically walk into the line of fire, trying to get them shot to use that potentially as propaganda, we think,” said Col. Chris Garver.

Associated Press reported US military officials said some of the IS fighters had already made their way into Turkey, and many were still in Syria.

US-led coalition forces had sustained three months of aerial bombardment and fighting on the northern Syrian city of Manbij, an IS stronghold.

In July, coalition warplanes dropped more than 1,000 munitions, including bombs, rockets and strafing runs (low-flying aircraft using aircraft-mounted automatic weapons) on militants in the area. US officials reported roughly 2,000 IS fighters were killed by airstrikes.

Syrian Democratic Forces seized control of the city on Friday and are now clearing the neighborhoods, looking for militants and bombs.

The Pentagon said IS had laced the city with improvised explosives and rigged entire buildings to detonate as they withdrew into the center of the city.

Manbij is a key victory for the SDF and the coalition, because it lies on a major supply route between the Turkish border and the city of Raqqa, the defacto capital of the IS group’s self-styled caliphate.