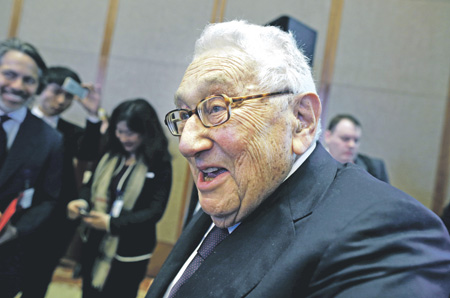 Today’s goal of the U.S. is a break-up of Russia, said the former Secretary of State Henry Kissinger in an interview to the American press. “To break the backbone of the Russian government”, – said the interviewer, the editor of a leading foreign policy publication. Clear signs of economic schism in Russia already have been already seen during the 1998 default. Then the regions refused to remit taxes to the federal government and tried to create their own gold and currency reserves.

A break-up of Russia became a goal, whereas a long-term perspective should be its integration, says former Secretary of State and National Security Advisor of the United States, Henry Kissinger. He said this in an interview with the editor of a reputable foreign policy publication “National Interest”, Jacob Heilbrunn. The latter agrees that politicians in Washington “aim to break the backbone of the Russian government.” However, the interview makes it clear that “to break the backbone of the Russian government” is a short-term goal under the strategic course for “disintegration of Russia”.

The Russian Empire and the USSR have already demonstrated a propensity for break-up. Over the past 100 years our country has been split at least twice – during the revolutions of 1917 and 1991. Numerous signs of economic separatism manifested in modern Russia in the early 90s and especially during the economic crisis of 1998. Then the regions experienced the inability of the Centre to solve pressing economic problems and tried to do it autonomously.

The most vivid manifestation of economic separatism were attempts to manufacture regional currencies, the creation of regional gold and currency reserves, resistance to transfer taxes to the Federal budget. A more complete list of signs of economic separatism is shared by a former advisor to the President and the deputy chief of analytical department of the presidential administration of the Russia, Emil Pain in the article on federalism and separatism in Russia.

“After the announcement of default by the federal government almost all regions have taken measures of economic self-defense, which actually threatened the economic integrity of the country,” – recalls Pain. According to official statistics, by September 1998, 79 regions have introduced administrative regulation of prices for food and restrictions on their export outside the region. The greatest threat was created by the atomization of regional financial systems. In the Samara region the work of the branches of Moscow banks was limited, a pool of local banks was established as well as a local cash settlement system.

Bashkiria, Kalmykia, Tatarstan, Tomsk oblast and Khabarovsk Krai suspended the transfer of taxes to Moscow. Kalmykia unilaterally transferred federal taxes to the local budget, Kaliningrad announced “a state of emergency economic situation,” and Kemerovo began to collect their own gold reserves. The then authorities of Sakhalin and the Yaroslavl region announced a change of form of administration.

A wave of economic separatism during the default of 1998 in many respects, was even stronger than in the early 90s when there were attempts to create the so-called Ural Republic with its own currency – the Ural Franc. However, after the change of government in 1998, the new Russian authorities quickly dealt with economic separatism. Local banks which didn’t transfer taxes to Moscow lost their licenses. And the regions which prohibited the export of food, were deprived of deliveries of fuel. The rapid growth of the economy helped defeat separatism due to the devaluation of the ruble.
(…)
“To look for possible ways and methods of disintegration of Russia in an interview with Kissinger is wrong in principle. Kissinger is talking about a systemic choice after the cold war by the States of policy of domination without regard to the interests of our country”, – says the head of the Council on foreign and defense policy, Fyodor Lukyanov. The crises of the 90s, he said, were caused by the ineptitude of the Center. Then the regional authorities were just preparing to survive on their own. When the threat of a deepening of the crisis passed, local officials forgot about economic separatism. “In the current climate I can’t imagine what should happen to repeat the scenario of the 90s,” says Lukyanov.