(Daraya, Damascus Countryside, 27/08/2016) ~ The second phase of the implementation of the agreement which was reached to evacuate Daraya city in western Ghouta of weapons and gunmen ended on Saturday in preparation for the return of locals to it. 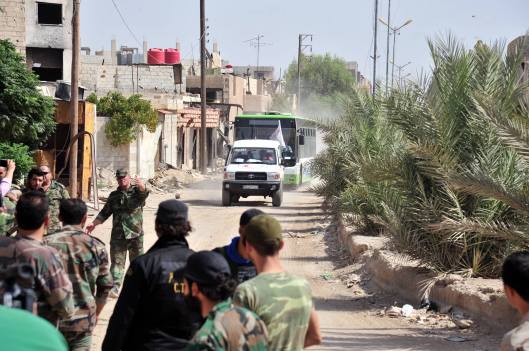 The reporter noted that the gunmen had set fire to many of their headquarters and positions inside Daraya before their departure, just like their fellow militants did yesterday.

The positions set ablaze contained computers and communication devices, proving that the gunmen had external affiliations, according to the reporter.

Tens of buses had entered the city earlier today to evacuate more people and gunmen. 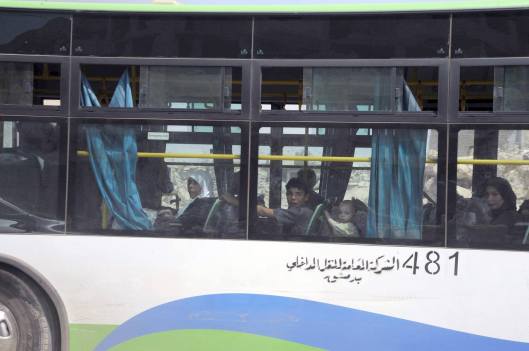 Those buses transporting families have already left the city towards the makeshift centers, while others transporting gunmen and their family members have headed towards Idleb city, after being searched at army checkpoints as they cannot take any medium or heavy weapons with them.

Later, Governor of Damascus Countryside Alaa Ibrahim toured some neighborhoods in Daraya city and inspected the situation there, telling the reporters that engineering teams will be sent to the city to set up plans for reconstruction there.

The governor noted that the evacuated families are being located to a makeshift center in al-Hirjalleh village in al-Kiswa area to the south of Damascus.

The center includes 724 housing places, 300 of which are fully equipped and prepared, according to Ibrahim.

The governor said that the Sub-Committee for Relief in Damascus Countryside provided all needed supplies for locals of Daraya in Herjjaleh in cooperation with the Syrian Arab Red Crescent (SARC) in addition to providing health care and other necessary services.

The governor pointed out that Daraya locals, who were besieged for years, are now under the protection of the Syrian state, adding that during the coming days, service infrastructure which was destroyed in the city by terrorism will be gradually rehabilitated in preparation for the return of locals to their houses. 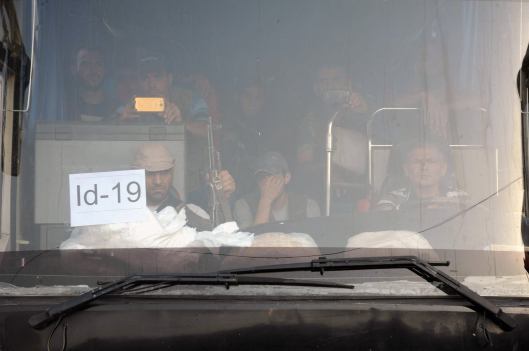 On Friday, a field commander told reporters that a number of gunmen wanted to have their legal status settled, noting that the Syrian government has agreed to this in accordance to the laws and regulations.

For his part, head of media department in the political administration Brigadier General Sameer Suleiman said in a statement to reporters that the achievements of the Syrian Arab Army in Daraya come within the framework of the achievements made on the ground in the war against terrorism. 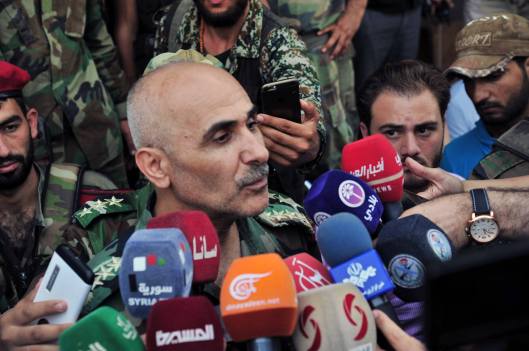 This achievement is a new proof of the ability and will of the Syrian Army that is determined to defeat terrorism completely and restore security and stability to every part of the Syrian territories in addition to the ability of the Syrian people who love life and who are able to achieve all objectives, Suleiman added.

On Friday and Saturday, all locals were evacuated of Daraya to makeshift centers in Herjjaleh, while 700 gunmen were evacuated with their families to Idleb countryside after handing over their heavy and medium weapons to the army units which carried out recently intensive operations against dens of terrorists who were forced to surrender.

As part of the settlement agreement which was reached to evacuate Daraya city in the Western Ghouta of arms and militants in preparation for the return of state institutions and families to it, the implementation of the first phase of the agreement started, including evacuating part of the people to temporary housing centers in Damascus countryside and 300 militants with their families towards the city of Idleb.

SANA reporter to the city of Daraya said that most of the people numbered 4000 will be relocated to temporary housing centers which the governorate of Damascus Countryside had prepared and provided them with all basic supplies.

The reporter pointed out that the columns of smoke that were seen in the city is a result of burning the militants to their sites along with all computers and communication devices inside them which indicates that they were connected to external bodies.

A field commander told reporters from inside Daraya city that the city will be empty from militants on Saturday, pointing out that 300 militants along with their families will be getting out of Daraya towards Idleb city while the rest of them will get out of the city tomorrow.

The Commander added that all the militants will leave their medium and heavy weapons in Daraya and the arms will be received tomorrow, noting that there are a number of gunmen demanded that their legal status be settled, adding that the Syrian government has agreed to settle the legal status of anyone ask for that it in accordance with laws and regulations.

He affirmed that the units of the Army and Armed Forces has recently carried out accurate and concentrated operations on the terrorists’ sites in order to protect the lives of civilians inside the city which contributed to a delay in restoring security and stability to the city, especially since the terrorists were using the people as human shields.

During the visit, the Governor said that the center has been provided with the necessary furniture and food supplies, in addition to 4 mobile clinics and a health services center to provide medical care for the people.

Ibrahim lauded the heroics and sacrifices of the Army and Armed Forces that led to ridding Daraya of terrorists, asserting that reconstruction and repairs will begin in the town very soon to repair infrastructure so that locals can return to their homes and jobs.

The center in Harjalla was set up by the temporary relief subcommittee in Damascus Countryside in cooperation with the authorities in the province. It consists of 724 housing units, 300 of them are fully prepared and equipped.