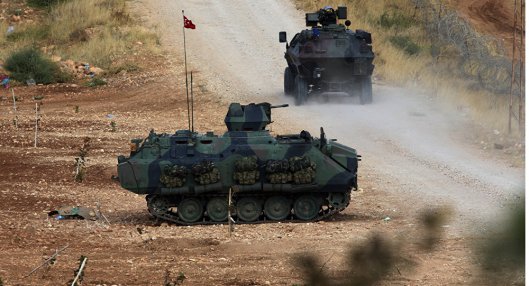 “The Turkish army’s air and artillery forces, in coordination with the armed terrorist organizations, targeted the villages of Jub al-Kusa and al-Amarneh to the south of Jarabulus city in Aleppo through shelling randomly, leading to a massacre and killing 35 civilians, 20 of them were killed in Jub al-Kusa and 15 others in al-Amarneh village, in addition to dozens wounded persons,” the Foreign Ministry said in two identical letters sent to the UN Secretary-General and President of Security Council about the bloody ugly massacre committed by the Turkish army in the north of Syria.

“Syria calls on Security Council’s member states to condemn those cowardly crimes and to exert all pressures and take all effective measures to guarantee the recovering of Turkish regime to its senses and forcing it abandon its support of terrorism or using it as a pretext to interfere in the domestic affairs of Syria,” the Ministry went on to say.

The Ministry affirmed that that the talk of the Turkish regime about the exit of ISIS from Jarabulus was in reality an entrance for other terrorist organizations to this city, which means it is a terrorism that substitutes another terrorism.

“The continued support of France, USA, Britain, Saudi Arabia and Qatar to the Turkish regime is a clear support to terrorism, not only in Syria but in all world countries,” the Ministry said.

It added that the government of the Syrian Arab Republic affirms once again that combating terrorism on the Syrian lands should be done through a coordination with the Syrian government and army that has carried on those wars with courage and heroism since more than 5 years.

The Syrian government calls on UN Security council to assume its responsibilities in preserving the international peace and security, and to call on Turkey to immediately withdraw from the Syrian territories, and to respect sovereignty and territorial integrity of Syria in implementation to international resolutions No. 2170, 2178, 2199 and 2253.