The Joint Sea-2016 started this Monday; that’s the fifth annual China-Russia naval drill, featuring stalwarts from both navies in action at the eastern waters of Zhanjiang, in Guangdong province, the HQ of the People’s Liberation Army (PLA) Navy Nanhai Fleet.

Considering this is the first time that the Joint Sea is happening in the South China Sea, apocalyptic alarms from the usual suspects could not be more predictable – and thoroughly dismissed by the Beijing leadership.

The Joint Sea-2016 intervenes just after a quite significant holding hand moment last week in Laos. Hand holders were no less than China’s premier Li Keqiang and Filipino President Rodrigo Duterte, a.k.a. The Punisher, clad for a change in full suit and tie regalia.

There were good reasons for such camaraderie. After all China and ASEAN had just agreed that the framework for a legally binding code of conduct in the South China Sea will be in effect before the end of the year.

Singapore lobbied “vigorously” for this key development. Beijing regards Singapore as “a key partner for cooperation in the region”, as Li told Xinhua. The Punisher’s own press secretary, Martin Andanar, squared the circle; “Our president also expressed his approval of having a framework for a code of conduct.”

The setting — Laos — could not be more strategically appropriate for China. For three years now China is Laos’s biggest investor – mostly in energy and mining, including the construction of the $868 million Nam Ngiep 1 hydropower project. Key planned projects include the $1.6 billion Luang Marsh Special Economic Zone (SEZ) near Vientiane, and — what else – a 472 km railway between Kunming in Yunnan province and Vientiane, with an extension to Thailand, to be completed by 2021. That will be part of the Southeast Asian branch of the New Silk Roads.

Laos was the setting for the first face to face meeting between a top Chinese leader – Prime Minister Li Keqiang — and the 10 heads of state from ASEAN, right before the East Asia summit – the annual gathering of the ASEAN 10 plus China, South Korea, Japan, India, Australia, New Zealand, US and Russia. 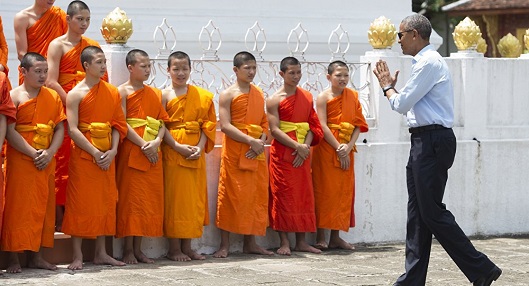 At the East Asia summit, US President Barack Obama, in his last – quite melancholic – visit to Asia, to where his administration allegedly pivoted, declared that The Hague’s ruling invalidating China’s territorial claims in the South China Sea is binding.

That was not only false – but piled up on a Nobel Prize with a license to kill (list) visiting Laos decades after the nation was bombed to smithereens by the “indispensable nation” now saying with a straight face that everything’s gonna be alright. Asians, to say the least, were not impressed.

The reason for Obama’s visit was to actually sell the pivot once again to Asia in tandem with its “NATO on trade” arm – the Trans Pacific Partnership (TPP).

Obama insisted that, “TPP is a core pillar of America’s rebalance to the Asia-Pacific. And the trade and the growth it supports will reinforce America’s security alliances and regional partnerships.”

He added, “failure to move ahead with TPP will not just have economic consequences, but call into question America’s leadership in this vital region.”

Beijing for its part privileged diplomacy over empty rhetoric when dealing with an in-flux ASEAN, crisscrossed by a stark diversity among its 10 member nations. Indonesia and Thailand, for instance, used to be bridge-builders, but now Jakarta is concentrated inward and Bangkok’s policies are in transition.

The White House was counting on Manila to press its – confrontation – case, as Manila is supposed to be a key cog in the pivot machine. Yet even when talking to Japanese Prime Minister Shinzo Abe, Duterte emphasized South China Sea problems should be resolved through peaceful means, and Manila would maintain dialogue with Beijing.

And then, to “celebrate” this pan-Asia meeting – and simultaneously the 68th anniversary of the founding of the Democratic People’s Republic of Korea (DPRK) — Pyongyang inflicted a dose of realism on all and sundry by conducting a fifth nuclear test.

China, meanwhile, keeps accumulating “facts on the sea” – with a lot of action, in the form of sea patrolling, originating from Sansha, a prefecture-level city set up in 2012 to administer the Spratly Islands, Paracel Islands and Macclesfield Bank (which the Chinese call Zongsha Islands).

These “facts on the sea” are irreversible, as Sansha has made sure islands, atolls, reefs, rocks, shoals – whatever the terminology – all across the South China Sea are regarded as a matter of national security, politically and strategically, for Beijing.

As far as in-flux ASEAN is concerned, Thailand may retain the status of strategic pivot for US interests. But now Washington must factor the delicate political equation before the looming – and extremely complex — royal succession, with the power of the Thai army solidified by a new constitution as it expands trade and political relations with both Russia and China.

Still, the only discourse emanating from Washington boils down to Pentagon obsession with confrontation in the South China Sea and White House obsession with TPP, the trade arm of the pivot.

Kishore Mahbubani, dean of Lee Kuan Yew School of Public Policy at the National University of Singapore, has been clever enough to propose a way out. What if Washington accepted a Chinese contribution in terms of high-speed rail technology – as a means to jump-start the US economy from the Pacific to the Atlantic. This China-US partnership in infrastructure would be, according to Mahbubani, a “match made in heaven”.

The American Society of Civil Engineers has projected a $1.44 trillion investment funding gap in the US between 2016 and 2025 – generating a huge drag on business, exports and incomes. China would have the financial and institutional capacity to build that much-needed infrastructure. TPP is a dead end. Perhaps Mahbubani should send his proposal to Donald Trump.