US Deploying Forces in 7 Bases in Northern Syria

(FNA) ~ The US has deployed its special forces in at least 7 bases in Northern Syria which are located in Qamishli, Ain Issa, Kobane, Hasaka and Tal Abyadh regions.

The Pentagon admitted last week that it has stationed its forces in Northern Syria but didn’t reveal any details. 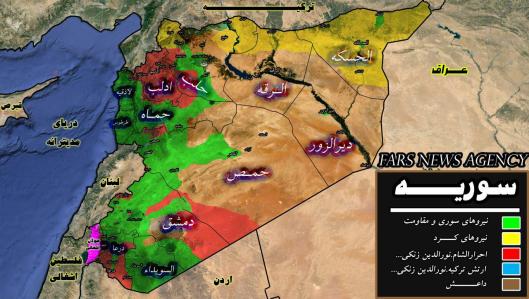 Based on information obtained by FNA from media outlets and field sources, the 7 bases in which the US forces are deployed are:

No official report has been released yet about the exact number of the US forces and weapons transferred to the abovementioned bases but field sources have reported observing armored vehicles, semi-heavy weapons, TOW missiles, thermal cameras, advanced wireless devices and night goggles in them.

Reports said last month that the US has set up a new military base in Hasaka, Northeastern Syria, under the pretext of demining the region, Kurdish sources said.

“The US has deployed tens of its marines in Mabrouka village in the Western parts of Hasaka province under the pretext of demining Ra’s al-Ain city which is now under the control of Kurdish forces,” sources told FNA.

A number of US experts entered the region to develop and prepare the runways with 2,500m length and 250m width to be used by fighter jets.

Abu Hajar airport which has not been used since 2010 is located in Tal al-Hajar region in the Eastern countryside of Hasaka which is controlled by the Kurdish People’s Defense Units (YPG).

The airbase is located Southeast of the town of Rmeilan, which is one of the YPG’s main strongholds and “largest arms and ammunition depots”.

The US has not received or even asked for a permission from Damascus for reconstructing the airbase. The United States does not have a UN mandate for intervening in the Syria war.

the usual American falsehoods and arrogance

We fly, you don’t:
US wants no-fly zone over Syria…
…but only for Russia & the Syrians

John Kerry says Syrian ceasefire plan will only work if all aircraft are grounded. But as Murad Gazdiev explains, the no fly zone over Syria mentioned by the Secretary of State wouldn’t apply to the US-led coalition.

3 thoughts on “U.S. special forces are currently deployed in at least 7 bases in northern Syria”