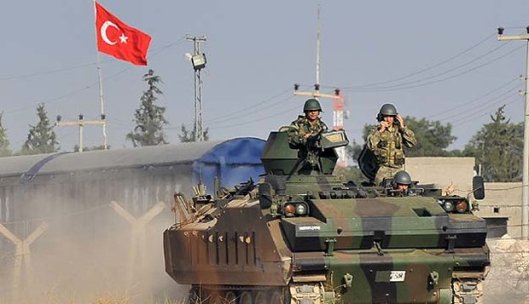 In violation of the international laws, the Turkish regime under Recep Tayyip Erdogan has established a hospital in Jarablus city, northern Aleppo, and hoisted the Turkish flag on top of it, committing a blatant violation of Syria’s sovereignty.

Local sources and media reports said the Turkish regime transformed a school building in Jarablus city-which is located in the north of the country adjoining the Turkish borders- into a hospital with a board fixed atop saying “Turkish Health Ministry- Jarablus Hospital”.

Social networking websites circulated images showing the Turkish flag hoisted on the building and a number of Turkish officials standing in front of it, in an unprecedented and dangerous act of aggression on the Syrian territories and the country’s sovereignty.

Observers see that the Turkish aggression is a new proof of Erdogan’s regime’s greed and hostile intentions against Syria’s independence and territorial integrity, attempting in several occasions to pass its project of establishing a no-fly zone in the north of Syria.

Erdogan’s regime has repeatedly assaulted the Syrian territories during the past few weeks through allowing ground forces into Jarablus and its outskirts under the pretext of combating ISIS terrorist organization- its partner in stealing the Syrian oil, gas and antiquities through deals between the terrorist organization and Erdogan himself as divulged by many reports.

Contrary to the claims that the hospital will serve the locals of Jarablus city, the facts show that it will be used for hospitalizing and treating injured terrorists.